Tracing skate culture’s relationship with the camera, from sunny California in the 70s, to skate’s intersection with hip-hop

6July 2018
TextLexi Manatakis
Against the Grain: Skate Culture and the Camera11 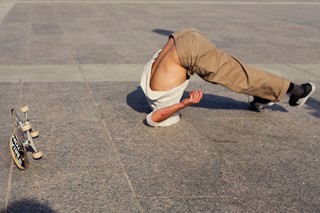 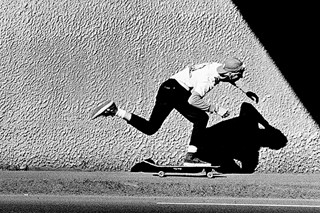 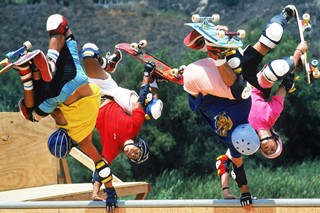 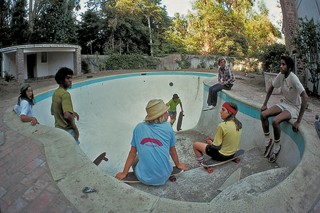 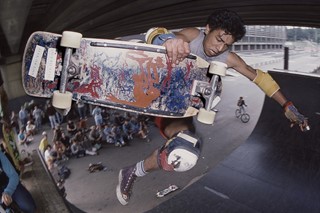 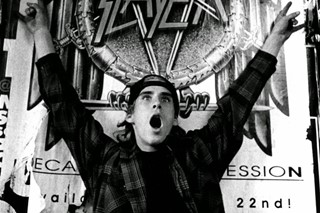 In 1965, Life magazine published a cover of San Diego’s national girls skateboarding champion, Pat McGee doing a handstand on wheels. It was a moment that bought skate photography into public consciousness. Despite it being largely ignored as an art form since then, half a century on, the medium is finally receiving the recognition it deserves. Launching Saturday 7 July (and running until 22 July at 15 Bateman Street, London), Against the Grain: Skate Culture and the Camera will exhibit over 50 years of skate photography through the eyes of some of the industry’s most notorious documenters.

Just as skateboarding itself evolved out of surfing, the earliest skate photos came from those who had previously been shooting surfers, and, since its conception, the medium has remained largely insular. “One thing that’s really important”, explains the show’s co-curator Jaime Marie Davis, “and has been integral to what skate photography is today, is that it’s always being shot by people who are within the culture, versus someone that is outside of the culture. It’s not people going into a subculture and shooting it and taking it back out for a different audience. Skating is shot from the audience, within the audience, and for the audience. I feel like that’s something really, really special about it.”

The medium itself is deeply complex, something Marie Davis and her co-curator Frankie Shea referenced in Against the Grain through its far-reaching body of work, as it traces and celebrates skate culture across the world.“It’s so difficult to put skating under a massive umbrella because there are so many complexities and intricacies within it,” says Davis. “I think gets pigeonholed too often as a medium to just capture the trick.” From Glen E Friedman’s documentation of youth culture skating in sunny 1970s California, to Mike O’Meally’s recent documentation of the Palace skate team in London, the show acts as a zeitgeist for the evolution of skating as a force of radical physical and social resistance. Beyond this, the show celebrates skate culture at its many intersections including streetwear, hip-hop, punk and art.

To celebrate the show’s launch, Davis walks us through six names that have been key to shaping skate photography:

“Skin Phillips started shooting in Swansea in Wales when he was little, turning his parents' bathroom into a darkroom and shooting surfing out there as well. He then moved out to California when things were really booming out there and ended up becoming the editor of TransWorld magazine for a number of years. So this is someone who just loves photography, you know, is just obsessed with it, and it's amazing to hear him talk about it, he’s just so knowledgeable. And he went on to be the Adidas skate team manager. He is just a really, really great photographer.”

“Glen E Friedman has been an iconic photographer for any sort of subculture, from hip-hop and punk, to skateboarding. Through a larger body of Glen’s work, you can really see the links of how skateboarding is not an isolated movement. It had ties with punk and hip-hop and all these other things, and I think you really see that when you look not just at this image but Glen’s broader body of work. You can see how skateboarding has bridged so many different elements of popular culture and I think that’s why Glen’s really important. I say skating is insular but it does bring in all kinds of groups of people under the umbrella of a love for having fun, and a rebellion against anything that tries to control. Glen’s work really embodies that, his whole ethos is quite punk rock. He has a publishing company called Burning Flags, he publishes all of his own books of photography. So in terms of, also, why skate photography hasn’t been considered an art form in itself is partly because these photographers have taken control of their work and their representation, and not compromising in a lot of ways. That’s true for Glen and I think it’s true for most, or I would say all, of them.

In this image, you can trace how skateboarding developed out of surfing. A lot of skateboarding was once done in a way that when you couldn’t surf you would practice on skateboarding. So these schoolyard banks were essentially the closest thing to a swell, an ocean swell, so it shows that this gesture of dipping down and brushing the pavement is something that comes directly from surfing. So I think it’s important to show the origin of that, in terms of the relationship between skating and surfing.”

“Dobie Campbell is amazing. He’s definitely the guy behind the scenes for so many things. He’s been involved with things like Boiler Room before it started and other really important music elements. He was even a mentor to so many different photographers, even though he doesn’t like being hinted at that. This is again a classic example of a photographer just following their interests. He likes taking photos of things that interest of him, of people and the culture surrounding it. So he was really involved in both music and skating during the beginnings of skateboarding in London.”

“A lot of people still don’t know that Spike Jonze started as a BMX and skate photographer, but obviously, he’s very well known. He has a very particular style and you can see where, in some of his other work, his love of motion and action comes from skateboarding. He was hugely influential during a certain period of the late 80s/early 90s and was involved in a lot of really important things during that time, establishing Girl Skateboards. Jonze was just throwing himself into anything that interested him, and I think that’s probably true with a lot of these skaters. This ties back again to why skate photography has been ignored as an art form. I think people like to label and categorise things and the fact is that a lot of these photographers had their hands in so many things that made skateboarding so massive, from developing the materials of the actual skateboards to the magazines, the media companies etc. They just wanted to do anything that interested them to make things better for the industry, and a lot of that was across so many different disciplines that they weren’t just shooting photos or having that particular style.”

“Tobin Yelland’s images were a departure from sunny California imagery and peak actions shots, developing a documentary style shooting behind the scenes. Many people attribute Tobin to introducing Harold Hunter to skateboarding during a workshop he ran, and being a mentor to many skate photographers from a less formal position than J Grant Brittain or other editors of the main publications that people also looked toward for advice.”

“Mike O’Meally has a really distinct style that captures really powerful moments. He has been shooting for over 25 years now, and he was part of the Palace skate team’s video magazine Palasonic. He had a number of images in there and we are including some of O’Meally’s recent shots that capture what’s happening in terms of skating in London right now. But Mike’s entire body of work is incredible. He was one of the main photographers for Palasonic.”

Against the Grain: Skate Culture and the Camera is running from July 7 – 22 July at 15 Bateman Street, London. You can find out more info here