Talking skin flicks and outsiderdom with the internet sensation

Tee Vee Dinner is internet famous. The 26-year-old transboy Australian has gained a global cult following without even trying, and it’s obvious why. The femme-presenting, DIY-living punk kid lives the life of a John Waters character made real. Or characters, rather, because Tee Vee Dinner aka Samuel S. is nothing if not a chameleon. Whether he's making net films like Skate Bitches, "toddler teen-inspired" videos for artists like KT Spit or porn films on a shoestring budget, he’s a breath of freshly dirty air amidst the clouds of sanitised online presence. We spoke to Samuel about the DIY porn-making process, his upbringing on the "bogan" outskirts of conservative Western Sydney idolising 10 Things I Hate About You, and why he recently moved to Canada. 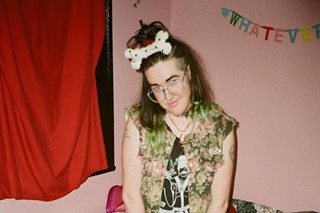 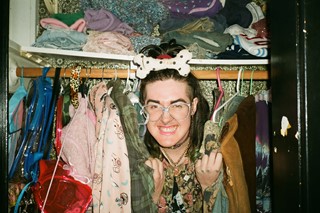 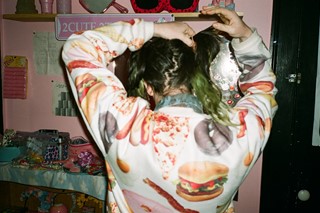 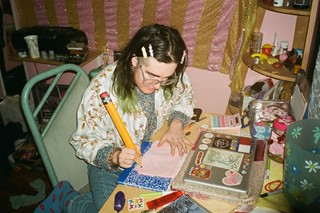 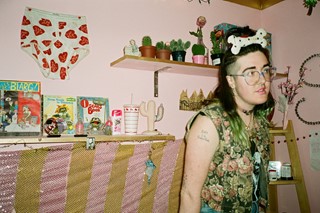 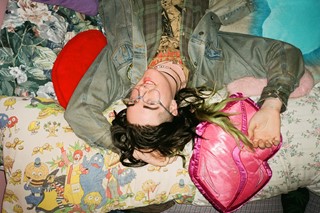 Dazed Digital: What was it like growing up in Sydney’s greater western suburbs?

Tee Vee Dinner: It totally sucked. Being in an area that doesn’t seem to willingly accept difference and creativity, I felt extremely alone and misunderstood and was bullied. I was also out as queer (or at the time bisexual and then a lesbian) from 13 years old, which was not the easiest to say the least.  I feel like punk saved my life. I spent pretty my much entire adolescence going to punk shows. By the time I was 16 my interests in pop-punk and hardcore had progressed to riot grrrl, and I stopped going to shows in Western Sydney entirely and started hanging out in Sydney. For my last two years of being in high school I would catch a bus and train every single weekend into the city. It would take hours but it was totally worth it.

DD: Who did you idolise in your teens?

Tee Vee Dinner: Most of my idols were fictional characters, mainly Daria, Enid from Ghost World and Pippi Longstocking. I was also totally and utterly in love with the band Huggy Bear and with everything Kathleen Hanna ever did. My bedroom was undeniably inspired by Kat’s room in 10 Things I Hate About You.

DD: How important a role did punk/riot grrl play in helping you forge an identity?

Tee Vee Dinner: I don’t even know where to begin. Punk means different things to different people. I discovered riot grrrl when I was 16. It introduced me to politics, ideas and art that resulted in me identifying as a feminist for the first time in my life. I feel like my identity at the time –femme dyke – felt validated and accepted in riot grrrl.

DD: What advice would you give a young person that was struggling with feeling like an outsider in one way or another?

Tee Vee Dinner: The fact you feel like an outsider isn’t always a bad thing. Usually, it’s hard feeling like you are not a part of something, and sometimes it’s detrimental to not have somewhere you feel safe or free or have others you can confide in or see yourself in. But in my experience, it’s through being an outsider and not belonging that I had to face myself, take risks and leave my comfort zone to eventually find people who understood me.

DD: How has your transition shaped your experiences or feelings towards that kind of thing?

Tee Vee Dinner: Coming out as a trans has shaped my experiences of ‘outsider-ness’ more so than taking hormones. I knew that I was trans long before I came out to people, solely because I knew people would have negative reactions to me identifying as male but presenting myself as a super feminine person. My aesthetic is really important to me, and before I started making films, my main way of expressing different characters and looks was through dressing myself up. I didn’t wanna loose an important part of who I was in order to fit other people's ideas of gender. When I publicly came out as trans in late 2009, it was received with pretty mixed reactions by fellow queers; it was horrible and a constant struggle of certain people dismissing me and misgendering me on purpose for a good year or more after. My experience though has come full circle and 90 per cent of people I know are great about it now.

DD: Why did you leave Australia?

Tee Vee Dinner: I find creating art in Australia challenging on a social level, because of tall poppy syndrome and being perceived as full of myself just for caring about and believing in my projects. I definitely plan on living in Australia again one day in the future, as I consider Sydney my home.

Tee Vee Dinner: It was never something I planned on. I was in Seattle and wanting to make a short film and saw an ad for an amateur porn film competition, so I decided to enter. I was intending it to be very sexually suggestive but not necessarily explicit, mainly because I didn’t wanna put any sexual expectation or pressure on people. The film I ended up making was Best Slumber Party Ever, which consisted of a cast who were totally down and excited to do it with each other, resulting in the film being very pornographic. It was received really well and people loved it so I decided to make a sequel titled Queen Bee Empire.

Tee Vee Dinner: Honestly, for me it’s not all that different to making non-explicit films; they involve the same work. I guess the easiest thing about making an x-rated film is knowing that the character development, plot and dialogue don’t have to be super complex and that I can get away with making it cheesy as the film centres around what’s happening visually and sexually. The hardest part of making porn is the same as the easiest — I feel like non-sex aspects of the film are dismissed or seen as not as important. It’s also hard when writing scenes and pre-shooting, to try and make sure that everyone’s needs are met and that I can trust that people are doing what’s right for them.

DD: Why are you so fascinated with with teen culture?

Tee Vee Dinner: Being a teen can be a pretty overwhelming and memorable experience. I’m 26 and I still feel very in touch with how I felt and how things affected me when I was a teenager. Everything was so dramatic and extreme and life-changing, I can’t imagine ever forgetting what that was like. Adolescence has just always been something I’ve genuinely cared about.

DD: What do you hope people get out of your work?

Tee Vee Dinner: I hope my films and my life in general helps validate DIY culture. I think a lot of people feel like they can’t do something unless it has a certain level of professionalism to it or that things must cost a certain about of money or there’s only set ways of how things must be, but that’s not always true. I want to create stuff that inspires people to create their own culture and live their own truths.