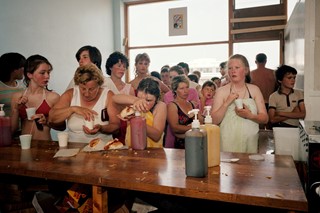 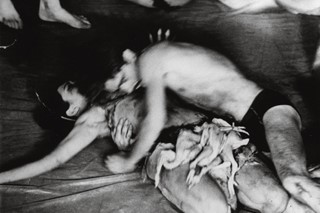 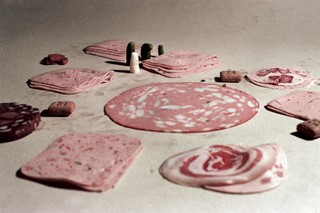 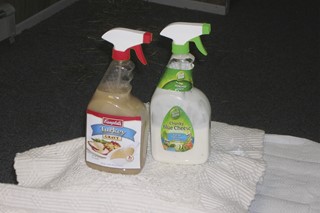 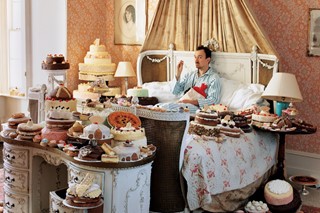 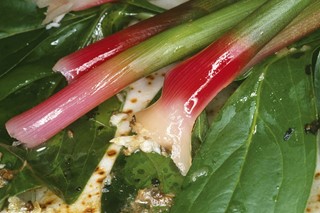 One of the earliest things my mother told me was to not play with my food. As a basic human need, food is meant to be prepared and consumed. It’s not for fun, and it’s not a profound symbol of something deeper – such as sexuality, pain, loss, or love.

Thankfully, photographers such as Tim Walker, Nobuyoshi Araki, Martin Parr, Roe Ethridge, Sarah Lucas, and more, disobeyed their mamas and proved that food holds more function than to simply feed. Whether Lucas is making a case for feminism, or Parr is playing on national stereotypes, through their lens, food comes alive in ways that go beyond “Basket of Fruit” (shout out Caravaggio).

Dedicating itself to documenting this narrative is the recently released book, Feast for the Eyes: The Story of Food in Photography, in which, Susan Bright, the book’s curator and writer, has gathered 300 images for – from the earliest photographers to contemporary practitioners. Below, we explore how some of our favourites have used food in new/fun/weird/exciting ways.

Japanese photographer and contemporary artist Nobuyoshi Araki is known for his symbolism and sexualised imagery. While bodies make up a great deal of his oeuvre, food is also an object of suggestion. Phallic shaped bananas and fingers shoved inside an orange help Araki play on these connotations. However, his photo book, Banquet, depicts food in a whole new light – subverting the kind of food photography you’d find in mum’s cookbooks. Bordering on vulgar and grotesque, these photographs, channel Araki’s coming-to-terms with the loss of his wife, Yoko. When diagnosed with terminal cancer, he began to photograph all of their meals together. While these are less suggestive than his other works where food makes a cameo, themes of desire and pleasure are still present – as is deep loss. Pointing out the power of food photography, Bright acknowledges how food can symbolise other crucial aspects of life: “through the act of photographing food, the very fundamental elements that make us human – sex, love, sustenance, and death – can be captured in the same very tangled, complex way they appear in life”.

Emerging as a young artist in the 90s as part of the legendary YBAs, Sarah Lucas became recognised for her work addressing politics, gender and the female body. Despite using crass humour and visual puns, Lucas’s work bore a hard message. Taking a stand against “lad culture” and objectification of women’s bodies, the British photographer employed the use of food – such as bananas, chickens and eggs – in her work to call out the language that was commonly used to refer to women’s bodies. Recognising the suggestive power of food within art, Lucas uses it to her advantage and points out the issues of male aggression. In “Self Portrait with Fried Eggs” (1996), Lucas is both drawing attention to the objectification of women whilst reclaiming ownership of her body. As stated in the book, “Lucas’s art takes the eroticism of food and turns it into sexual politics instead”.

Roe Ethridge’s food photography is for anyone who has ever found a half-eaten piece of fruit in a fruit bowl and thought, “what kind of a psychopath...” It’s as if you’ve turned up to the dinner party too late: banquet candles have almost burnt out, a wheel of Camembert melts off the table, and strawberries have sprouted layers of fur. But Ethridge’s works are meant to confuse, concern and intrigue. Referencing commercial food photography of the 50s through to the 70s, he plays on the idea of product photography and twists details of normality – in the case of the below image, by peeling sections of fruit and placing them back. While integrating – and the distorting – the tropes of fine art, Etheridge is known for exploring methods of the digital age and is propelled by discovering “how pictures can be easily replicated and recombined to create new visual experiences”.

Known for his surrealist fashion photography, Tim Walker is appreciated for his ability to really exercise the term “dream big”. Often drawing upon our favourite childhood tales, Walker lures us with his fantastical scenes and the promise of allowing our minds to wander from day-to-day adult life. Food is a repeated occurrence within his images, often in the background but also taking centre stage, as seen in “Self-Portrait with Eighty Cakes” (2008). It’s a rare moment where Walker turns the lens on himself – posing on a bed in an extravagant room surrounded by sumptuous cakes. Connotations of greed, gluttony and desire spring to mind immediately, followed by a presence of child-likeness and innocence, complemented by his pajamas and hot water bottle. Fulfilling a completely over-the-top aesthetic falls in line with his usual fantasy-driven photography and dream-like scenarios.

Featuring largely throughout Feast for the Eyes: The Story of Food in Photography is Britain’s, Martin Parr. Exploring what food can say about national identity and societal issues, Parr does so by capturing the cliché, the mundane and the every day. He photographs ordinary food to challenge our perception of national treasures – cakes for afternoon tea or ice cream at the seaside. By employing tactical framing around seagulls eating chips by a UK flag, he plays with societal stereotypes, once commenting, “You can tell a lot about society, who we are and what we like doing, by looking at the food we eat.”

Feast for the Eyes: The Story of Food in Photography – published by Aperture – is available now