More than 1,000 people who took part in Extinction Rebellion-organised protests are going on trial, in what’s said to be the biggest protest crackdown in recent legal history 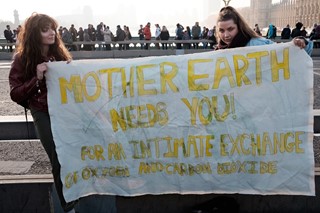 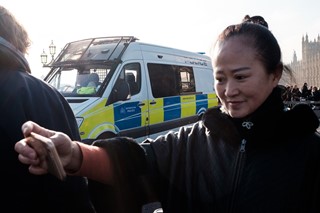 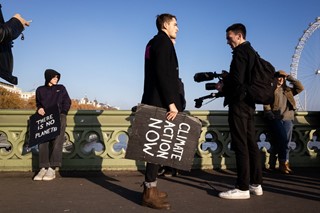 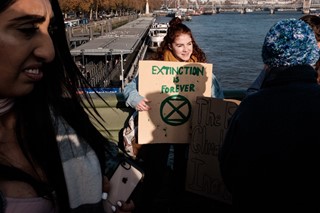 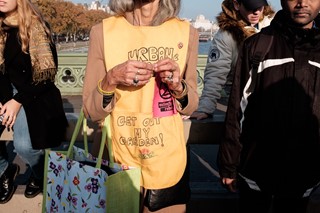 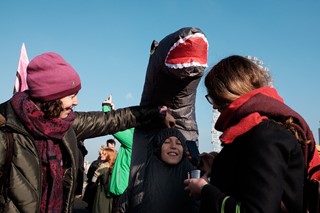 This week (January 13) the UK reported a record high of more than 1,500 daily coronavirus deaths, with the prime minister warning of a “very substantial” risk of exceeding intensive care capacity. England is in the middle of a national lockdown in the wake of a new, faster spreading variant, and people have been urged: “act as if you have the virus.” However, the government has carried out an “unprecedented” crackdown on Extinction Rebellion activists amid the pandemic.

Since the environmental movement was established in 2018, it has staged several major disruptions in the UK, raising awareness of the climate emergency, and calling for immediate action. In that time, support for the group has swelled. Its most recent two-week rebellion, in September 2020, saw activists glue themselves to the ground outside parliament, highlight the misinformation of major press corporations, and launch a Digital Rebellion for those that couldn’t attend IRL.

In the past year, authorities have responded to XR’s campaigning with claims of extremism and threats of tighter protest restrictions. More than 3,400 have also been arrested for their involvement in XR actions, according to a recent report by the Guardian, marking one of the biggest crackdowns on protest in the UK’s legal history. (In 2019, Dazed spoke to some of the supporters who had been arrested for the cause.)

Of those arrested, over 1,000 activists have been taken to court, with many asked to travel across the country to attend trials at the height of the pandemic.

Over 1000 rebels are being taken to court in what experts say is one of the biggest crackdowns on protest in British history. Lawyers say the decision to press ahead with trials during the pandemic is unprecedented, and putting people’s health at risk. https://t.co/HxBS07Tbtm

One XR activist, a 30-year-old social care worker named Joel, tells Dazed that he was required to travel from Manchester to London for a plea hearing in October 2020. Like the vast majority of those taken to court, he was facing minor charges, for obstruction of the highway. Though he intended to plead not guilty, Joel had to cancel his appearance after members of his household started to show COVID symptoms. “I rang and then emailed the court saying that I couldn't come,” he says. “Because obviously getting a train from Manchester to London, and back, would be grossly unsafe and irresponsible.”

In the next couple of days, five members of Joel’s household tested positive. But that wasn’t the only bad news: a week later, he received a letter stating that the court had found him guilty in his absence. Though the material impact of the verdict was relatively small – a £20 fine and six month conditional discharge – Joel notes: “the principle seems pretty appalling… finding people guilty, for charges they intend to plead not guilty to and fight in court, because they legitimately couldn't attend.”

Similar situations have been reported by many of the XR activists charged during the pandemic. Hollie, a 22-year-old student who was arrested during the October 2019 occupation of London City Airport, had to travel to London from Leeds a year and three months after her original arrest, due to a series of coronavirus-related delays. “It just felt completely unnecessary, dragging this out for over a year on such a minor charge,” she says, “but I think they’re trying to basically crack down on the process and put people off doing it again.” In the end, she was found not guilty before she even gave evidence.

Lily, a 22-year-old student at Glasgow School of Art, was also charged with obstruction of the highway at London City Airport. Due to COVID-19, her case has been put off from April onwards, all the way through summer. “It does seem crazy,” she says, “that we’re going ahead now, when we’ve got a much bigger threat of COVID, it’s more infectious and it’s spreading faster than ever before.”

Ian, a 61-year-old from Leeds, was acting as a police liaison for XR before authorities shut down communication at the October 2019 rebellion on London’s Millbank. After sitting down with locked-on protesters for solidarity, he was arrested under the unlawful section 14 order, and subsequently charged with obstructing the highway. After months of delays, he was instructed to appear in court on January 21. “I don’t know what’s going to happen, because I’m not going to go to the court,” he says. “For my own safety as well as other people’s.”

“It’s simply unacceptable that they’re forcing people to take those risks. I’m hoping they’ll set up some sort of remote trial but I don’t know whether that’s possible. I don’t want to be put in the situation where I’m in contempt of court for not turning up, so therefore maybe I’m then forced to plead guilty before the case.”

The courts haven’t kept activists informed about postponements or cancellations, either. Craig, who also appeared on Millbank, says: “They don’t tell you until the 11th hour. I got told one day before a hearing that it was cancelled, and then I got told two days after a hearing was due to take place that it was cancelled, but I did a no-show myself anyway.” If his February court date is cancelled, he suggests, “they won’t tell anyone until the day before, when they could just do a blanket statement. One of their aims is to inconvenience us as well.”

In some cases, activists have been able to participate in trials virtually, but found the court ill-equipped to deal with the change. Lucy, 55, appeared in court via video link. “It’s been an extremely stressful process sorting that out,” she says. “I found the online trial process to be shambolic and disorganised in the extreme. I am not convinced it delivered justice or a fair hearing. I preferred this to having to go, but I really do think that these cases should have been adjourned, if not thrown out completely.”

“There’s no public interest in prosecuting people for very minor offences, trying to exercise their right to peacefully protest.”

“I feel like the government feel quite threatened by XR and other movements that are building, and that’s why they’re trying to crack down on it,” says Hollie. “Hopefully it just feeds the fire in a way.” People are nervous about the prospect that tighter protest restrictions could remain after the pandemic, though, she adds. “I’ve worked with HS2 protest camps too, and they’re always finding ways of tightening legislation to make it more difficult for protests.” In November 2020, it was announced that protest exemptions would be removed from coronavirus rules under the second national lockdown.

Lily points out that being arrested and taken to court is all “part of civil disobedience” – “you do things that are minor offences but that are arrestable by nature” in order to raise awareness about the cause. In the middle of a pandemic though, going to trial for such offences could mean endangering yourself, your family, or others attending court, at a time when vital resources are already spread thin.

“It’s so obviously dangerous, so obviously irresponsible, so blatantly putting politicised prosecutions of the most minor offences ahead of public health,” Joel says. “In the midst of this unprecedented, lethal crisis, the commitment to continuing with these prosecutions does seem to confirm that the tactics XR have employed – mass, low-level, law-breaking civil disobedience – are seen as genuinely threatening by the powers that be.”

In November 2020, Extinction Rebellion announced a campaign of financial disobedience, targeting: “the corrupt political economy that sacrifices our health, happiness, and unity for the fortunes of the few.” The “money rebellion” will employ organised tax and debt strikes. Outlining its aims for 2021 in the post below, the movement adds that it will return to mass, in-person civil disobedience “when it’s safe to do so”.