While Robert Mapplethorpe is a household name, George Dureau is lesser known, yet the impact of his photography on the artist’s nudes from the late 70s is undeniably present

Think of homoerotic nude photographs from the 70s and 80s and one name is likely to stand out over any other – Robert Mapplethorpe. While Mapplethorpe was indeed the first to hang his erotically-charged photographs on a gallery wall as a wave of gay liberation and sexual revolution surged over the city – particularly the art scene – even he himself was looking outside of his city for influence.

A pioneering photographer in terms of the male nude could, in fact, be found further south in New Orleans. George Dureau was ten years Mapplethorpe’s senior and the claims that New York’s enfant terrible was heavily influenced by him were present throughout both of their lifetimes – with art historians and writers often dubbing Mapplethorpe a student of Dureau. Although there are clear distinctions between the two artists’ work, the baseline similarities are that both Dureau and Mapplethorpe were gay and photographed nude males in black and white – who they also often slept with – and were typically black men. However, there are also clear divides and differences in both their work and approaches. Mapplethorpe’s work has long been shadowed by accusations of racial fetishisation – particularly over his Black Males exhibition where he exclusively showed black male nudes, leading to accusations that he was portraying them as sexualised objects as opposed to human beings. Yet Dureau, although not entirely free from these criticisms, debatably managed to navigate his relationships with his models in a different way, by, as he said, humanising them.

Whatever the case, Mapplethorpe’s name is household and Dureau’s is much lesser known. Only two books dedicated to Dureau’s work have been published, the recent George Dureau: The Photographs, courtesy of Aperture, and another titled, New Orleans, published 20 years previously in 1985, but there are a plethora of titles and films dedicated to Mapplethorpe. While Mapplethorpe died in 1989, Dureau would continue to create work up until a two-year battle with Alzheimer’s disease took over and he ultimately passed away in 2014 at 83-years-old. In recognition of his life’s work, here’s a if-you-like-Mapplethorpe-you-should-check-out-Dureau’s-photography guide.

A rare look inside the wildest bar in 1970s New York
George Dureau: The Photographs10 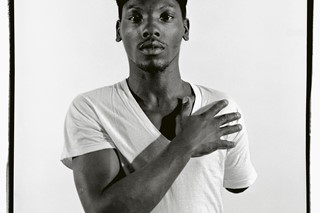 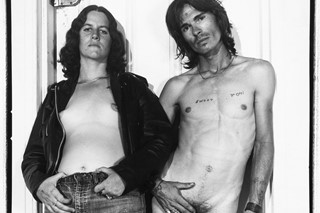 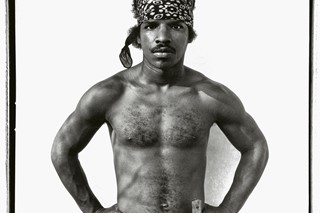 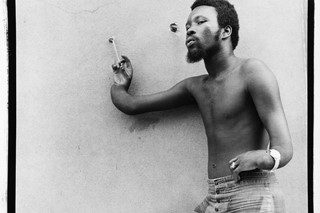 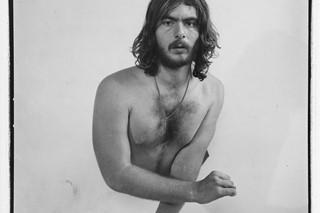 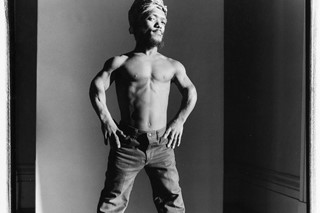 HE WAS BORN, RAISED AND REMAINED IN NEW ORLEANS

George Dureau was born in 1930, raised and, for the most part, stayed in New Orleans his entire life – leaving only to serve in the army and also to briefly study architecture. He began drawing when he was young, encouraged by his mother to capture courtyard scenes and magnolias. As an adult, he moved to the French Quarter and lived as one might have in Paris at the same time. He loved hosting and had an open and flamboyant personality – described as a “striking sight” in a local obituary – existing in a period of decadence and excess in which he absolutely thrived. Amongst friends he also found his models on the city’s streets and its bars as he cruised around on his bicycle looking for both subjects for his photos as well as his sex life. Even his inevitable rival and contemporary Robert Mapplethorpe would be drawn to visit Dureau in the south, frequently travelling from New York after they met in the late 70s – an influence discussed further below.

Honing an obsession with figures, shapes and lines over a lifetime, if you asked Dureau what he considered himself, he would tell you he was a drawer. Comparing drawing to handwriting, Dureau would boast that he could draw every day, whereas photography exhausted him and was never something that interested him at all. Admittedly, he only got into photography in the 60s as a method of research for his drawings and paintings, also because people didn’t believe the people he was drawing and painting were real. It wasn’t until the 70s that he took a proper interest in photography as an art after being gifted him an inexpensive camera which he would go on to use for years until coming into possession of a Hasselblad.

Although, while he may have taken to photography, his art remained tied to art. Art history was always present in his work though and he regarded himself as a “Classical-Romantic”, incorporating these elements into his portraits. He also was open about a love/hate relationship in terms of the difficulties and realities of the camera; “Sometimes I’d take two or three rolls of the same pose because I knew the pose was right. I just had to get the eyes right.”

HE SAW HIMSELF AS A “SHAMELESS HUMANIST”

Although adamantly seeing himself as a drawer over a photographer, perhaps Dureau’s most notable work is his series of intimate studio portraits that focus on, what he described as, “triumphantly handicapped people” – taken over four decades. Riding around on his bicycle as a means to scout models, and sexual partners, Dureau met several disabled men over the years who he would invite to his studio to pose nude. Admittedly, he held a fascination with disabled people since childhood and athough the way he speaks about them may be divisive (“I’ve always loved tough dwarfs… pirate-y, Long John Silver”) Dureau’s framing of his models allowed the observer to see more than just nudity. Mainly, he believed it allowed the observer a chance to gauge a sense of who the model was, rather than what they were capable of sexually.

Seeing himself as an egalitarian, he provided a platform and visibility for those who might be passed by on the streets. He was also aware that perhaps this is what made his work less desirable to the mainstream – particularly when compared to one of his contemporaries, Mapplethorpe. “I’m shamelessly humanist which makes mine a lot less sellable and sometimes less bearable because mine push you into a corner of social and political problems,” he explained.

“If I contribute something strong to photography that’s probably it, my ability to picture the model’s sexuality in their brain or their life as told through their face, at the same time” – George Dureau

He kept in regular contact with his models – even feeding, sheltering and paying their bills on occasion – and counted them as friends. B.J. Robinson, a man with no legs who Dureau met as Robinson was pushing himself down a New Orleans street on a skateboard, as well as Roosevelt Singleton, a man who suffered from dwarfism and worked at the local garage, were frequent models.

Dureau defined himself as a true artist. “I live a warm, involved humanist sort of life,” he said. “There are lots of people passing through it. I have exciting experiences and learn things about people. They always go into my art. I cannot have an experience and it not go into my art.”

It’s extremely difficult to talk about Dureau’s work without discussing Robert Mapplethorpe. A friend, collector of his work and his contemporary, Mapplethorpe met Dureau in the late 70s after the New York artist saw his work in a group show at Robert Samuels Gallery in New York. Mapplethorpe was also a frequent visitor to Dureau’s flat on Dauphine Street in New Orleans’ French Quarter where many, including Dureau, believed that Mapplethorpe found inspiration for his own photography, as well as cultivated an interest in black men as both models and sexual partners. This said it’s important to mention that Dureau’s shots of black male models predate Mapplethorpe’s Black Book by several years. In an essay now published online, journalist/photographer Jack Fritscher observed, “Robert Mapplethorpe loved visiting Dureau, but not for the food. Robert was made quite anorexic by drugs; his main interest was in Dureau’s latest ideas. Mapplethorpe was a collector of Dureau’s photographs and a closet student.”

In Aperture’s recently released book George Dureau: The Photographs, author Philip Gefter writes that the “eclipse” of Mapplethorpe over Dureau and his contemporaries can perhaps be put down to the fact Mapplethorpe was the first to show his work in a New York gallery. In 1977, the rise of gay liberation in New York was something Mapplethorpe harnessed openly in his work to both acclaim and criticism – a decade earlier (until 1967) being gay was a criminal offence.

Whether if Dureau moving to New York would have had an impact on his notoriety will never be known, however, ultimately, as Gefter concludes, it is extremely difficult to tell who influenced who most, or if it can be put down to influence. New York was in a state of creative and experimental flux, so it’s not surprising that certain artists – Peter Hujar, Duane Michals included – were inspired by similar subjects and aesthetics.

When comparing their work, Dureau would describe Mapplethorpe’s images as “things happening in a room” and “a slice of an intimate movie”. He believed that Mapplethorpe had “scenario” in mind when shooting his subjects, often straight from the bedroom, and that there was a suggestive element of sex and “use” of the person. For Dureau, he preferred to get to know his models, some he would claim to have photographed or drawn for decades, explaining in a rare interview in the mid 90s that he would draw someone and then years later be drawing their children. He also explained that relationships were extremely important to him and claimed that Mapplethorpe would rather never see some of his models again: “Robert felt threatened by the people he photographed. He would want them to never come back again”.

In regards to his use of shooting in almost exclusively black and white, Dureau believed it to be more convincing. “I’m not that much interested in colour. I’m more interested in abstraction of black and white. Because you’re taking only line and form and shapes between things – the positive shapes, the negative shapes – and making them into your picture. Whereas once the colour comes in there’s all sorts of festivity and distraction and other things happening and there's an imitation of life that’s possible with colour.”

Given Dureau’s penchant for shooting black men, the fact that New Orleans was home to America’s largest slave trade is hard not to take into consideration when looking at his work.

Questions of fetishisation when a white male is photographing a nude black man, particularly when the models were often disadvantaged – poor and disabled – and Dureau often paid them in food, need to be asked. However, unlike Mapplethorpe, Dureau believed he navigated this via the way he presented his models – in that he allowed their personalities to shine through, rather than just spotlighting their body parts or disabilities. Gefter notes that Dureau presented what was “truthful about them as individuals”. Although critics and even those who enjoy Dureau’s work will argue that any humanisation of the models was quickly taken away by the potential sexualisation and objectification of their bodies, but Dureau would simply explain that he preferred to shoot nudes because he believed that nudity was timeless, whereas, clothing reduced the work to “pop art or to a clothing store advertisement”.

Another criticism aimed at Dureau was that his work with disadvantaged and disabled people was in a similar vein to Diane Arbus, who documented marginalised people in work that is still debated over – was she a humanist or a voyeur? Dureau rejected this criticism in a lengthly interview in the mid 90s, claiming his work was in fact “anti-Arbus”. “She genuinely thought they were freaks,” he said, explaining he wasn’t trying to make his models seem “scary”. Instead, he wanted the observer to want to know more about the model. “If I contribute something strong to photography that’s probably it, my ability to picture the model’s sexuality in their brain or their life as told through their face, at the same time.”

George Dureau: The Photographs is available from Aperture now. Watch a rare hour and a half long interview with Dureau here