See a decade of waterlogged tracks, beauty pageants and tattoos in the state’s remote southern swamplands

Sitting swamp side, somewhere deep in the Everglades of South Florida, 6,000 spectators gather to watch a sport that is integral to the identity of the area. A sport so Floridian it has not ventured out of the city of Naples since its inception in 1949.

For three weekends of the year, around 75 of the hand-built, part-boat, part-dragsters rip through the deep mud, cutting through spraying water from the course. The contraptions may cost up to $100,000 dollars to design, but there’s something very simple and traditional about the event. With three races a year, the races have become a southern subculture, taking on a life of its own: local girls compete to be swamp buggy queen, while the swamp buggy parade shows the pride in the sport and of being southern.

Naples native, Malcolm Lightner, has spent the past ten years delving into the unique world of swamp buggy racing, and thanks to a successful Kickstarter campaign he raised the necessary funds to introduce the tradition to the rest of the world. Dazed caught up with Lightner to talk about his decade documenting the families and fans keeping this pocket of culture alive for his new book Mile O'Mud. 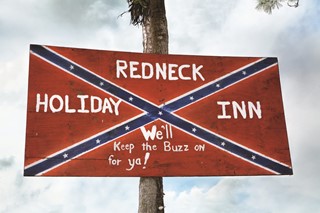 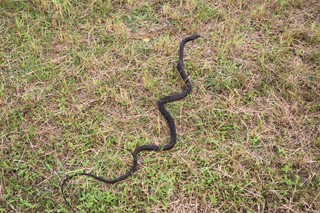 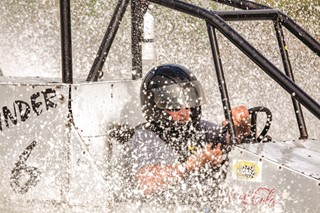 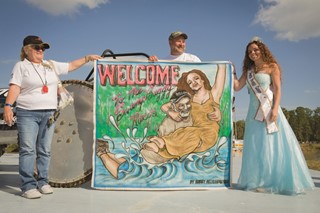 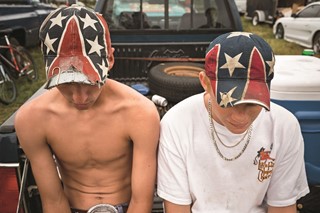 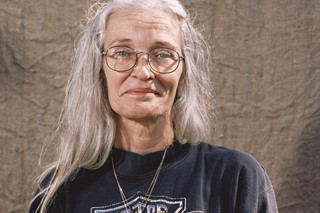 What drew you to the subject initially?

Malcolm Lightner: I had moved to New York after graduating from school and I think maybe just the shock of moving to somewhere so different made me start thinking about where I grew up and how different it was in South Florida. I remembered the event that's been going on since 1949, and I wondered if they were still doing it. I looked it up and, sure enough, they still were. I was so surprised that I decided to start going down to see what I could do for a photo project.

Malcolm Lightner: In my own mind I felt like a bit of an outsider. For me, it was easy, I had easier access to the community because of my family. I’m fourth generation native Floridian to that particular area. So I could mention my father's name, my mother, even my great uncles. One of my great uncle’s became swamp buggy king in 1951 and 1952 with a buggy called the 'Flying Saucer'. I could quickly engage in conversation and was immediately welcomed into the inner circle – if you will.

Malcolm Lightner: It's really energised. There's a palpable sense of adrenaline. People get very excited and it's such a strange sight even if you've gone multiple times. It's still hard to fathom the way these buggies look, it’s very elegant the way they slice through the water and mud on the track and there’s a very beautiful spray behind it. Everything is harmonious in a very energised way. You're just like, ‘wow I can’t believe this is happening’. It's just very strange. And people are just very excited. They love to watch it, they'll watch it all day long. And they never tire of it.

It's very much a family event. There are generations of racers and spectators and the more you talk to some of the real locals they'll tell you, “Oh I've been going to the races for 25 years, you know, I haven't missed a race”. Stories like that. And even in my time going there in the past 10 years I've seen five-year-olds and seven-year-olds. They're now young adults and they're still going. It's ingrained in them to go. It's part of how they identify, it’s their group, it's their people.

How do you think the sport reflects the culture of Naples? Is it something that's really unique to that area?

Malcolm Lightner: It started originally as a hunting tradition. Back then they called them hunts buggies or woods buggies. And they were really designed to just get deep into the everglades so they would hunt for things like – deer, boar, turkey. One day, a hunter challenged another hunter and their buggy and that initiated this whole racing spirit that endures. So every year, hunters would gather before hunting season, to show off what they've built and created, and it just turned into a race. Now the buggies don't have anything to do with hunting.

It's unique to the area because Naples is situated right on the edge of the everglades. The buggies were designed by necessity, so it definitely reflects a certain aspect of the culture. Whether you refer to them as Florida natives, Florida crackers, rednecks – there are all sorts of terms – this is just what they do.

It is the ultimate mud-in sport which is pretty common in the south. But it hasn't really seemed to grow or move outside of this community. It doesn't really happen anywhere else only this one little dot on the planet.

“It is the ultimate mud-in sport which is pretty common in the south. But it hasn't really seemed to grow or move outside of this community. It doesn't really happen anywhere else only this one little dot on the planet” – Malcolm Lightner

Every year they choose a swamp buggy queen, were there any other interesting traditions that have developed in, or around, the community?

Malcolm Lightner: Yes, there is always a swamp buggy parade that was typically October and that was like the official launch of hunting season. Yeah, I mean there were definitely customs. Not a lot of them have really survived, for example, the men would grow beards for the event. There's like a bushy beard contest, there was like a jail for people who were caught in the race and women used to dress up in old frocks. I mean I don’t know why any of that happened.

They're struggling to keep the swamp buggy parade now. The community has grown so much. They're much less interested in supporting swamp buggies, racing, and the parade. So I think it's a challenge for them to maintain this identity and these rituals and pastimes because the area has changed so much.

When you started documenting swamp buggy racing it was 10 years ago, did your focus or vision for the project change over those 10 years?

Malcolm Lightner: It did. Originally I was focused on the buggies themselves and then the more I covered the whole area of the Florida sports park, where the track sits, I started to get a sense of all the different characters. After that, I became a lot more interested in the people and their relationship with the races. I definitely became really focussed on tattoos, clothing and accessories that very much highlight people’s relationship to this area. For example, a lot of native Floridian tattoos. There’s this whole idea of pride of being a Floridian, of being southern. And then there's all these types of food. There's a very distinct, very unique flavour. I reconnected with my own Floridian pride going back.

“In my time going there in the past 10 years I’ve seen five-year-olds they’re now young adults and they’re still going. It’s ingrained in them to go. It’s part of how they identify” – Malcolm Lightner

Was there anything about the whole culture of it that was really unexpected?

Malcolm Lightner: I never really spend a lot of time thinking about what it means to be an American; the nuances, and differences between the north and the south. There's a whole dialogue about what a rebel flag, the Confederate flag, symbolises. The event is full of them. So the most uncomfortable aspect for me is reconciling with what the flag meant to them. Was this a group of racist white people? I know the answer is no but certainly looking at clothing with various symbols on them I had to think why these groups had formed.

It's perfectly natural. People can be very offended by it and so then I find myself thinking, why? And coming to a sort of understanding of the political and social aspects to it. I think of my project as more of an anthropological survey. Here is this group of people doing something very specific and what does that mean?

Looking through the images, I and a lot of other English people have negative associations with the confederate flag. Do you think people will understand more and might even reconsider whether Southern patriotism and the Confederate flag can be a symbol of pride rather than prejudice?

Malcolm Lightner: Yeah, that's my hope. I hope it boils down to the fact we're all human, we just grew up in different areas. Different areas have different qualities and we can't escape that. I think there's always this very current idea of being perfectly politically correct and I personally think it's just completely impossible and at times quite ridiculous.

What do you hope people take away from looking at your images?

Malcolm Lightner: Well, there was one Naples woman who's just been a real advocate and said: “To see the history and my friends honoured honestly, fairly, and with love warms me through and through. Thank you so much.” That one comment alone made me feel like everything, all the effort, and expense... everything else was worth it.