Photographing women has been a passion of Anita Corbin since her student days. London in the early 80s was her hunting ground for documenting emerging and diverse subcultures – the New Romantics, punks, mods and rockabillies, were all born out of the city’s flourishing alternative club culture, and captured in her series Visible Girls. One of the congregational centres for these non-conformist youths was the Blitz club – also known as the home of the New Romantic subculture movement – set up by Steve Strange and Rusty Egan and frequented by 80s icons like Boy George, John Galliano and Stephen Jones. Known for their androgynous styles, extravagant hair and make-up, the ‘Blitz Kids’ represented what Corbin was out to capture – they were the embodiment of radical change.

Continuing her documentation of notable women, Corbin is now working on First Women, an on-going project – to be fully revealed in 2018 – that will profile 100 British women who were the “first” in their field at something. Despite 35 years having gone by since shooting Visible Girls, Corbin isn’t done with the project yet. She is now searching for the women she photographed for the series and is intrigued to see who and where they are now. As for her unseen picture above, she explains, it perfectly relays the vibe of the Blitz Kids era, how they were perceived then and how their ‘raison d’être’ has perhaps been lost in the decades since.

“This was taken at The Blitz nightclub in the early 80s. I was living in Covent Garden at the time and studying photography at the Polytechnic of Central London (now the University of Westminster). The Blitz was an iconic hub for experimentation, androgyny and ‘anything-goes’. You could feel that power as you walked through the doors – London's art, music and fashion scene all rolled into one glorious experience!

It was a Tuesday night and I had just blagged my way past the door carrying my Olympus camera plus a 35mm lens (my favourite lens), a huge Braun flashgun, a heavy battery and a bag of film. I was wearing a US air force jumpsuit from Flip, an American recycled clothing shop, and I had bleached blonde hair. Bowie was playing. It was the second time I'd ever been to The Blitz and had gone there specifically to hunt out New Romantics for my Visible Girls project. I knew that The Blitz had a reputation for being full of ‘peacocks’ – people who like to show off and really dress up.

“I’m sure this image would not have the same impact now as it did then – we’ve been saturated to the point where we are less critical, less affected and less moved” – Anita Corbin

Most of the pictures seem to have been taken on the stairs or in the loo (you could at least get some privacy in there). These two were making themselves up – I don't think they were friends actually – and I asked whether they would mind being part of my project and they were happy to oblige. There was a lot of make-up and hair experimentation going on. I thought ‘wow what a contrast in two girls’ – one in the rubberised dress with the lowest plunge you could imagine, next to a girl in wool, barely showing any skin at all. I was so excited by the style diversity and how ‘not normal’ they looked.

I was interested in photographing the ‘informal’ uniforms that young women were adopting. As a young woman myself, I was also seeking my identity – I was interested in women's choice and this was reflected in the 80s itself and its active women's liberation movement and subcultural experimentations. I wanted to create a series of images that showed how young women had a choice in how they expressed themselves – from shaving their heads, to becoming a WOW (woman-orientated woman) to being an ultra-feminine New Romantic. And executing this in a way that was exciting, colourful and engaging – as a piece of art and not a dry social document.

I always thought it was a powerful image, but it didn’t quite seem to fit into the Visible Girls series at the time. I was a devoted colour photographer and loved the colour and textures of the red in this shot. Classic images always have the ability to take you back to that moment. What’s different now is that our society would look at this image with very different eyes. One would be ‘hot’ and arguably, in a wool turtleneck, the other would be ‘not so hot’. I’m sure this image would not have the same impact now as it did then – we’ve been saturated to the point where we are less critical, less affected and less moved. But within its historical context, the implication of that image has so much power, but you had to be in it and around it to understand that freedom – to drop your disguise or costume and be who you were. Now anything goes and it’s much less of a risk or challenge to break out and really show who you are.”

Corbin is also looking to identify the unnamed women in the pictures – see yourself or someone you know? Email anita@1stwomenuk.co.uk to get in contact. See more work from the photographer below: 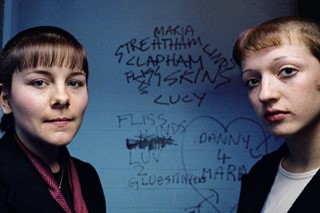 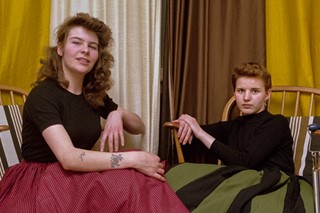 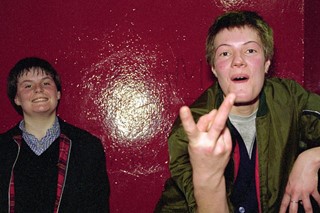 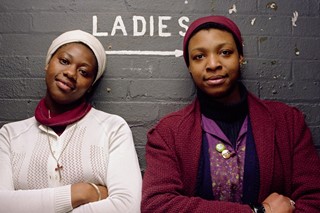 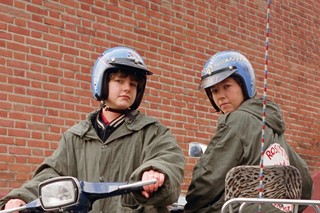 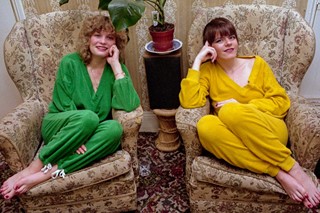