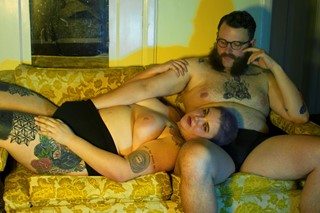 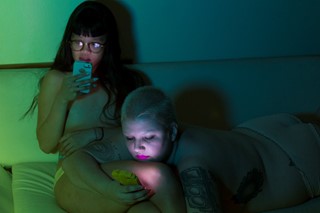 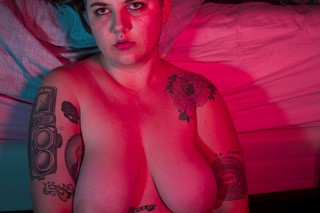 Using her nude body in contrast with anything from a barren, winter landscape to glittery, girly bedrooms, photographer Lauren Crow refuses the male gaze in favour for her own. Her nudity is neither a battle cry nor submissive, simply a state of being that we rarely see from larger people without needing an accompanying hashtag or campaign. The agency isn’t to prove anything with her work but rather simply to exist.

Similarly, her portraits of friends and others always have a caring, almost nurturing feel to them. The moments captured feel candid: giving us a sneak peek into the intimate connections in Lauren Crow’s life.

How then, can Crow delve deeper into our personal lives and thoughts with her new project ‘Intimate’? Set to launch this spring, Crow explains just how personal she’s willing to go, “Most of my series or imagery is either of myself or a subject. This series - except a select few of the images - puts me into these intimate situations behind the lens. It explores the different kinds of intimate relationships I have in my life.”

What’s inspiring about Lauren Crow’s work is that she’s normalising different types of bodies - especially fat bodies – in situations we often don’t get to see them. Natural poses, instead of ‘flattering’ ones, delve into the day to day of being a fat woman. A life that doesn’t have to be all control pants and pin up silhouettes.

By allowing us to get intimate with her and her relationships, Lauren Crow is not only liberating herself but anyone who looks like her too. The liberation coming from not just seeing ourselves represented but seeing ourselves realised as beautiful. Her work is not so much a political statement as it is a necessity. Following up the work of Nan Goldin and Jen Davis, the fat body deserves both its glory and its grossness to be depicted with the same effortless beauty that Lauren Crow achieves in her work.

With work ongoing for her ‘Intimate’ series, Lauren Crow is focused on this project for a good part of 2016 already and as for the rest of the year? She tells us to “wait and see”.