Last week it was announced that this year's South African elections will see the Equal Rights Party stand for the first time, defending the country's LGBTI community against persecution and discrimination. Dazed spoke to photographer Julia Gunther about her project Rainbow Girls, which focuses on the lesbian women living in South African townships.

The project is the third instalment in her series Proud Women of Africa. “Needless to say, the situation in large parts of Africa is far from ideal,” Julia explains, “but I think that South Africa has the chance to become a leader for change when it comes to LBGTI rights.”

The Berlin-born artist spent seven years working in film, moving between Amsterdam, London, Berlin and Cape Town before deciding to turn her attention to photography. Capturing her subjects in rare moments of vibrant self-assurance, Julia exposes the unflinching defiance of these women and their refusal to give in to the repressive attitudes that dominate South Africa's socio-political landscape. 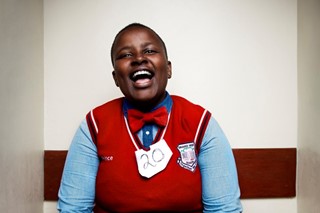 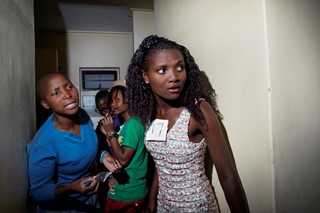 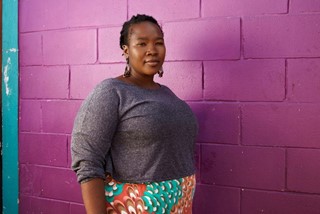 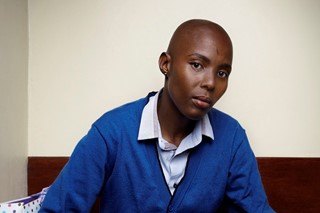 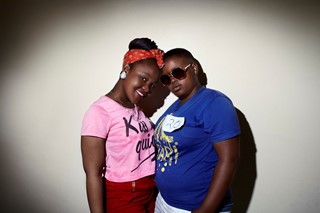 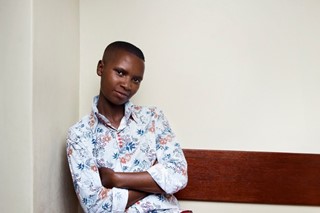 Dazed Digital: What inspired you to start working on Proud Women of Africa, and Rainbow Girls in particular?

Julia Gunther: The transition to start working on my Rainbow Girls project felt natural. A lot of my friends in Cape Town are gay, and whenever we met up they told me stories about the plight of the black gay community. They are forced to hide their sexuality and subjected to unimaginable horrors by an ignorant and bigoted culture. I found it so strange that in the Rainbow nation, people's sexual freedom was also defined by skin colour and by which social group they belong to. The stories my friends told me about corrective rape, beatings and banishment, but also about the bravery with which these women face each new day and their refusal to lie down, convinced me of the need to photograph them.

DD: How did you first meet the women you photographed?

Julie Gunther: What drew me to the Rainbow Girls was the same feeling of respect that I felt for other friends who maintain their pride in the face of danger. These gay women live under the constant threat of rape and violence, yet refuse to surrender to the prejudices of their communities. Once I heard about the Miss Lesbian competition, a lesbian beauty pageant in the middle of one of Cape Town's townships, I knew I had to get down there and try to photograph it.

After photographing the contestants at the beauty competition I was able to arrange several meetings with different women in their homes and in a women's shelter. The women also began to open up to me, telling me about their difficult lives. I found other women through friends or acquaintances. I was referred to one particular woman because someone else knew she played football, and therefore assumed she was gay.

DD: How did they react to having their photographs taken?

Julie Gunther: During the Miss Lesbian competition the girls were under a lot of pressure because of outfit changes and the tiny space they had to share backstage. I just squeezed myself in the middle of it all and found a spot to set up my light which was literally between the toilet, changing room and exit door. They warmed up to me quite quickly and started to enjoy the moment of fame in the flash of light.

DD: You often set your photographs alongside the stories of your subjects. How important is it for you to give these women a voice?

Julie Gunther: It's really important to me. I don't feel I have the right to talk about their lives and what they've been through, as there was no way for me put into words what these women felt, so the only way I thought I could do their stories justice was to let them recount them in their own words.

DD: What drew you to focus such a large part of your work on Africa and these South African townships?

Julie Gunther: I think I was just meant to be there. You meet people, then you meet more people and you start building a little network. Had fate led me to a Brazilian favela or a slum in Indonesia I would have found the same proud and strong people there too, as long as that place has the same clash of hope and despair, the same close-knit communities and the same proud characters.

If I look back in twenty years time I might be able to give you a better answer, but at the moment it just feels right to me.

DD: How would you describe your experience working on this project?

Julie Gunther: It's been a real eye-opener and incredibly emotional. These women have trusted me enough to allow me to publicise parts of their lives that they have, in most cases, kept hidden for many years. When I sit across from these women sharing a meal or a beer and they tell me their stories, it's truly humbling.

DD: Do you think attitudes towards gender and sexuality show any signs of changing in South Africa in the near future?

Julie Gunther: I think so. What my Rainbow Girls are struggling with at the moment will be less of a fight two generations from now. Whereas twenty or thirty years ago, being gay was simply not accepted in South Africa, it has now become an issue of social groups.

If you're part of a group that is more accepting and open-minded you can live your life the way you want, as is the case for the more urban and white populations in South Africa. But if, like the Rainbow Girls, you come from a poor and black community, being a lesbian can result in exile, rape, or death. It's now more of a social cultural caste. But I do think that, slowly, things are changing for the better.