Chatting to the NY street photographer about a new documentary, technology and whether the camera phone has restored photography

As part of the Nokia Lumia 925 Low Light Photography Competition, we take a look at the inspiring work of Cheryl Dunn. Street photographer and film-maker too, her work on street photography showcases what's possible with a willingness to get outside and the means to capture what you see. Putting the call out for the next great in the genre Cheryl has mastered, Dazed and Nokia have been inundated with entries. Now it's time for you the public to vote - bid for your choice and give the winner a brand new Nokia 925.

When Cheryl Dunn first got into professional photography, she found herself trying to capture the unpredictable and frenetic action going down in the boxing ring. This experience, coupled with a love for graffiti, would later lead her down the natural route of street photography, a genre that has provided much of the subject matter for her subsequent, successful career as a photographer and filmmaker. Her most recent endeavour is the feature length documentary Everybody Street, a film doubling as a historical portrait of New York City’s street photography tradition and an introduction to some of its most important practitioners, from early hip-hop style chronicler Jamel Shabazz to former Photo League-member Rebecca Lepkoff. We talked to Cheryl on the phone from New York – the city that inspired both the doc and her own images – about history, technology and whether the camera phone has the potential to yield a new photographic sensibility. 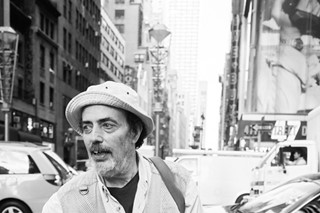 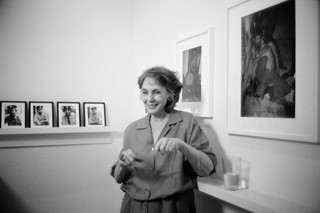 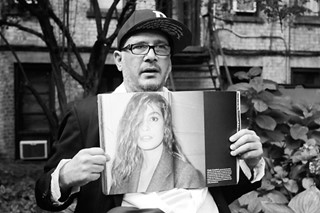 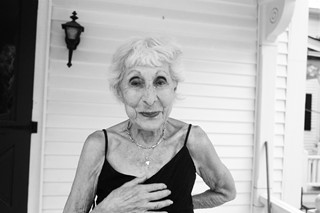 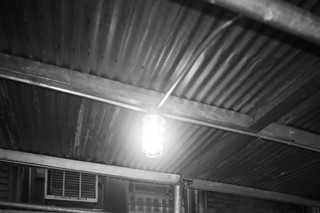 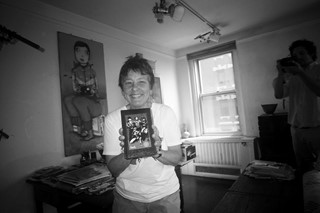 DD: What was it that first attracted you to shooting in the streets rather than, say, studio work?

Cheryl Dunn: When I started shooting boxing in the 1980s, I suddenly had a ticket into this really inaccessible world. I used this subject as an opportunity to hone my skills, as it’s very difficult to get great shots of boxing since you’re pinned to certain sides of the ring and have to pick where you’re going to stand. You have to be flexible, instinctual and fast, and that was really the foundation of my photography practice. I also documented a lot of graffiti stuff happening on the street, so I guess two of my early practices led me to do more and more street photography. It was just what made me happy, and I could do it all day, every day.

It’s really hard and it requires so much patience, it’s not like you can create things or make scenes happen. You can anticipate something and put yourself in a place where it might possibly happen, but you can never create it. That’s what I love about it, actually. Photography is not a democratic medium – in the business sense. More so than ever before, because in the past you kind of had to know what you were doing technically, whereas now cameras sort of do everything for you. So the photography business is more of a personality thing, or about who you know. That is not democratic to me – it’s not necessarily about your talent or skills. That’s something that bothers me about many aspects of life... I think street photography is just like, if you don’t put in the time it doesn’t matter if you are rich or privileged or whatever – you’re not good at it.

You can anticipate something and put yourself in a place where it might possibly happen, but you can never create it.

DD: I guess street photography in that sense is one of the few forms of photography that is inherently authentic?

DD: Who did you look up to?

Cheryl Dunn: I’m a huge fan of Bruce Davidson. I just think Subway is one of the most epic New York photography books. I grew up in New Jersey, on that edge of NYC in the really gnarly eras of the city. It was the late 70s, I was a teenager and we would come in to this bankrupt town – it was really scary and really exciting. Every time we went over the bridge, my heart would be racing. I think Subway is just an epic document of a city at a very extreme time. The subway is like a spider web of an entire population, so raw and amazing. And of course I always liked the graffiti... Meeting him [Davidson] was actually a catalyst for me pitching this film.

DD: Yeah, tell us about your documentary? Where did the idea come from?

Cheryl Dunn: It was commissioned by the Seaport Museum, in conjunction with a retrospective on Alfred Stieglitz. They consider him one of the first street photographers of the time, he took the large format camera off the tripod and walked around with it a handheld 4x5. He really fought for photography to be respected as an art form, so I wanted to make a film about the people who followed in his path and were inspired by the uniqueness of the street life of New York City: the way people move, the architecture, they way the light falls, the steel and glass structures – just the volatile proximity and the condensed amount of people walking the streets. I wanted to reach out to people who had a major body of work that deals with the streets of New York. Artists that were alive, which is why the artists in the film tend to be older – some of them are in their 70s, 80s and 90s. I think it’s very important to have artists talking about their own process, rather than critics and pundits doing all the talking. We have so much of that. 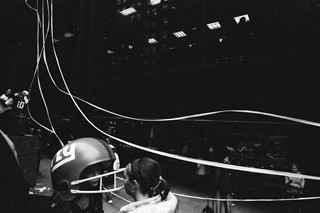 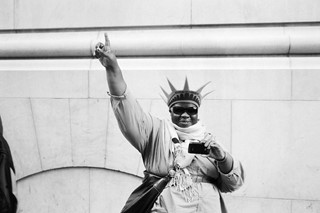 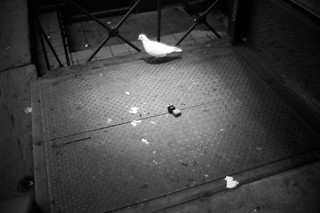 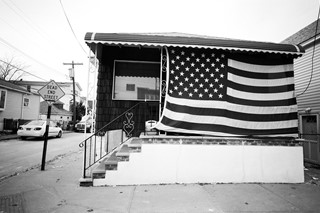 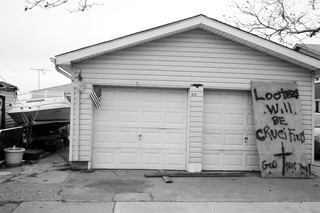 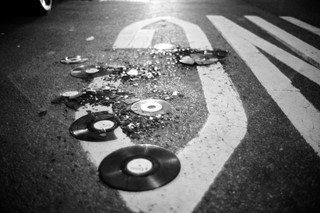 DD: The film introduces some truly boundary-breaking, visionary photographers, such as the Photo League and Bruce Gilden. Is there such a thing as radical street photography today?

Cheryl Dunn: Well, it’s harder to come up with new things. But I think there’s definitely amazing stuff happening just because of the ease at which people can do it – especially with camera phones, as everybody has one. But what they are saying is a whole different story. I recently watched this Paul Strand documentary and he said ‘You can take pretty pictures all day long, but what are you saying?’. I guess I struggle with that myself: I take all these photos of lots of different types of things, but when I have an exhibition and I start selecting and compiling them, I have to think deeply about what am I saying with the 20 pictures I’m picking. I think it’s an interesting accompanying art form to photography – the editing. It’s something I don’t know that people know how to do very well. I think it’s the difficulty of our time now, but hopefully also what we will learn.

DD: In terms of technology, how do you think street photography has changed since the 60s and 70s, which many consider its heyday?

Cheryl Dunn: You know, photography’s not that old as a medium, and definitely not in being considered as art. It was definitely a heyday because there was so much new, so much valuable material. Now the materials are being taking away, in a sense. The traditional materials are disappearing. Most of the street photographers back then were shooting their film, processing their film, printing their pictures in a darkroom – really working from A to Z through all the stages, from putting your film in the camera to presenting a print. That’s a long process – a handmade process. That’s obviously the big difference between then and now, but I think there’s also always going to be traditionalists, always going to be a backlash of not wanting your picture to look the same as everyone else’s pictures.

There’s consumer practice and there’s art practice. The first will go with technology and the second may utilise it, but travels in its own direction and at its own speed.

I think there’s definitely amazing stuff happening just because of the ease at which people can do it – especially with camera phones, as everybody has one.

DD: You mentioned camera phones earlier... what kind of an impact do you think its arrival has had on the genre?

Cheryl Dunn: A friend of mine told me that when she started shooting digital cameras she shot a million more frames, but never printed them. There was so many that she never even dealt with them anymore, never making albums or prints like she had before. Now with camera phones, you carry your pictures around with you and you use the phone to actually share them – sharing moments and experiences. I think in that sense, the pictures take on a bigger role in your life. When it was just digital cameras, it was more distant in people’s life.

DD: The traditional argument is that the image has become more ephemeral, but I guess in that sense it becomes more valuable when it’s curated and presented, for instance online or through apps?

DD: So devices such as the camera phone can also expand the possibilities of photography?

Cheryl Dunn: Well, photography started just as a document. People used to paint stuff as a record, then photography came around, and for a long time people still just considered it as a record – it wasn’t art. Now you have all these apps being created that emulate darkroom effects that take years and years to perfect. In one way that renders everything I spent my whole life doing obsolete, but on the other hand, that technology has created a million more people who are into photography, because they’re participating in it – however easy what they’re doing is. To me that has to be a good thing, because it means more people are interested in the medium, in the history of it. They’re not just looking at photographs, but engaging with it. I hope it translates into trying to understand how we got to where we are. One of the things I wanted the film to do, besides being a sort of love letter to New York, is to stress the fact that it’s important to document your surroundings and your friends. It’s important to have records of things – important to history, and important to people.

Everybody Street will be screened at the Raindance Film Festival, 25th September - 6th October 2013.

Click here to vote for your favourite entry in the Nokia Lumia 925 Low Light Photography Competition, our search for the best street photographer and their low-light shot. The one with the most votes gets a a Nokia Lumia 925, best camera-phone on the planet. With enhanced software, Carl Zeiss lens and effective ISO settings, it can shoot up to 3200, making it perfect for street photography.