A raucous new dance troupe is bringing pole back to its roots, platforming marginalised bodies and BIPOC while raising awareness – and money – for sex worker rights 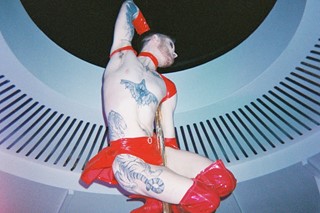 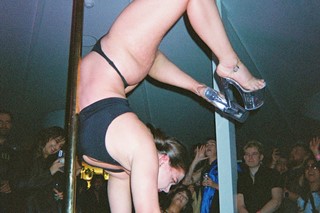 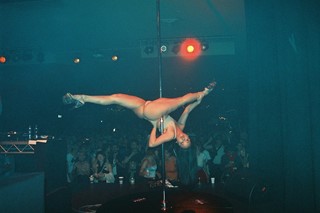 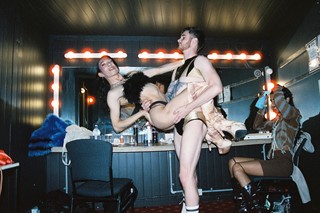 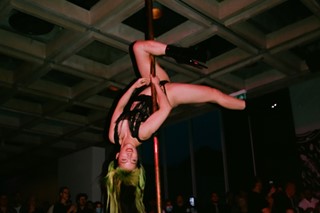 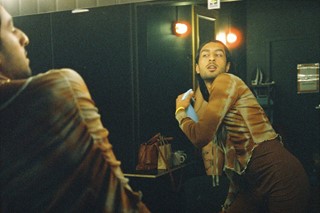 In mid-August this year, while London was in the midst of a record-breaking heatwave, dancer Jay They Stallion was moving mesmerisingly around the pole to Teyana Taylor’s “How You Want It?” dressed in a black lace bodice and thigh-high boots. Before the song began, the crowd gathered in VFD, Dalston’s underground art centre, were told to back away from the stage to avoid a patent pleaser to the face. The warning proved necessary: minutes later, Jay led an onlooker by the hand to a bench at the back of the room. Positioning their head in between their new assistant’s legs, Jay then lifted their body into an elevated headstand, moving their legs in the air to the beat, before lowering down to the floor in the splits.

London has no shortage of queer club nights. Still, this one was unique: the group performing – Club Chrome – had travelled from Australia, where they are the country’s only queer, sex worker-fronted pole collective.

The group was founded in Melbourne during the lockdown of 2020, when former stripper Linhqu, a queer Vietnamese-Australian, began to notice a growing tension between the pole and sex worker communities. Sex workers were either unable to work or risking their health to make money; at the same time, people were continuing to pay to attend inner-city pole dance classes.

Eventually, Linhqu approached the Red Rattler, a community-run warehouse theatre, with an idea: a sex-worker-led pole dancing event raising money for The Scarlet Alliance, the country’s national peak sex worker association. The night would be a tangible way for allies to support the industry and would, hopefully, recreate the feeling of belonging and community Linhqu had felt in the strip club locker rooms. Although initially worried that she wouldn’t be able to find enough dancers willing to fill the bill, Linhqu ended up being overwhelmed by how well-received Club Chrome was – and immediately began planning for event two.

Pole has permeated pop culture in recent years, appearing in everything from FKA Twigs’ “Cellophane” music video to Jennifer Lopez’s showstopping appearance in Hustlers. Pole fitness classes can now easily be booked in studios across London, while online, millions frequent StripTok – a TikTok subcommunity started by, and created for, sex workers that, despite many informative, truthful and educational videos, is increasingly filled with people outside of the industry. Both online and off, this interest in the art form overwhelmingly divorces pole from its BIPOC, sex worker roots, and straight washes it to exclude queer and trans bodies: “People get to play at being a stripper and benefit from the aesthetics,” Linhqu says, “but don’t have to deal with the stigma, oppression and lack of protection sex workers face.”

Today, Australia is changing: same-sex marriage has been legalised since late 2017, and in major cities queer collectives are common. New South Wales, the Northern Territory, and most recently Victoria have legislated for sex work to be decriminalised. But despite this, research conducted in 2021 found that stigma towards the industry – even in legalised territories – remains rife. This causes a significant mental health impact: sex workers reported poor treatment from mental health practitioners who saw them as “victims lacking agency, imposed beliefs that sex work was the pathological root cause of mental health issues, or approached the issue with fascination or voyeurism.”

This stigma extends to the pole. ‘Pole-fit’ classes began to gain momentum in Australia in the mid-2010s, led by blonde, toned and tanned women synonymous with the likes of Bondi Beach. Still today, the majority of the country’s pole dance studios don’t recognise the origin of the art. “The pole dance scene in Australia has historically always been very white cis women-centric,” non-binary Vietnamese-Australian pole teacher Oryx says. “They were the people who opened studios and they were the faces and bodies you saw in all the advertising. The loudest and most powerful voices in the country are white and the pole scene has been a reflection of that.” Salem Serene, a sex worker based between Warrang (Sydney) and Naarm (Melbourne), agrees. “There is still so much whorephobia associated with sex work in pole-fit studios, and this means people are increasingly oblivious of the immense privilege they have to even put on a pair of pleasers and not face any of the structural discrimination we face in our day to day lives.”

“The pole dance scene in Australia has historically always been very white cis women-centric... They were the people who opened studios and they were the faces and bodies you saw in all the advertising” – Oryx

“Club Chrome reflects Australia’s cultural legacy,” Linhqu says, “particularly our queer and sex worker rights movements and our diverse migrant population. We don’t shy away from sexual aesthetics. We embrace them, question them, and move within and beyond them.”

The goal with Club Chrome wasn’t just to raise money and awareness through its showcases, but to establish relationships within the arts community to create opportunities that didn’t previously exist for queer pole dancers. As a queer pole and cabaret performer with a chronic inflammatory autoimmune disease that informs their practice, Eva Berlin found pole wasn’t always the most comfortable or supportive environment. “In classes, there’s often a focus on ‘getting the trick’, on gaining strength, on enduring pain and weaving together multiple complex moves. Often this just isn’t an option for me,” Eva explains. “Instead, Club Chrome’s ethos of pole stems from strip clubs, where the quality of movement and the unique style of the dancer is celebrated just as much as showing off the hardest tricks. It is so freeing to be in a space which celebrates what my body can create, rather than always being aware of my limitations.”

What makes Club Chrome different from other collectives or movements in queer spaces, says Roshan Ramesh, one of the group’s founding members, is that there are no set rules or system behind it. Unlike the ballroom scene or RuPaul’s Drag Race, which Roshan says can be like the “queer equivalent of sports”, you don’t have to follow established practices and customs. “Our collective is so random and diverse. If you saw us at a restaurant together you’d probably be pretty confused, actually,” they say. “Even when it comes to our shared interest of pole, we have such different styles. We do different moves, use different parts of our body, dance to different kinds of music. That’s why I think it works for me. I still feel valued as an individual.”

Since Club Chrome’s creation, Linhqu has been made aware of similar scenes flourishing overseas, such as Rat Party, another queer, BIPOC, sex worker-fronted circus collective in Leeds. Following its recent showcases in Singapore and London, a Singapore-based group has formed. Linhqu says the next chapter is finding ways to enable the collective to work together more seamlessly to create group pieces and experimenting with elements besides pole, such as live music (as seen at Club Chrome London where dancers improvised with musicians Mercedes666 and ĀN JÍ) costume, make-up and AI-enabled projections. “Continuing to nurture and platform emerging queer pole artists not only in Australia, but establishing chapters of Club Chrome with our unique ethos worldwide is my dream so that our community can grow stronger together.”