Writers, artists, and curators share their personal thoughts on the prolific writer’s febrile presence in culture

As I, I, I, I, I, I, I, Kathy Acker opens at the ICA in London, we expand on our spring/summer issue project with a day dedicated to exploring the writer’s sometimes complicated legacy: from the artists who were influenced by her, to a retelling of her life through her own words.

Kathy Acker’s writing gets under your skin – her guerilla, cut and paste style hugging your bones, that strident evaluation of enduring anxieties (wild sex, wilder politics, the ills of capitalism, and state control) nudging at your nerves. The prolific writer first garnered attention in the bowels of New York’s underground creative scene, before transplanting to London to become a countercultural pioneer there.

Now seems like a particularly potent resurgence for Acker – two decades after her death, there’s a sharp interest in her life and legacy that parallels a wave of feminism that’s rejecting flattened identities and brand infiltration, fiction that’s reflecting on myth and the self outside the autobiographical, a youth generation that’s questioning sex and gender norms. A new exhibition brings much of that together – I, I, I, I, I, I, I, Kathy Acker at London’s ICA is the first UK exhibition dedicated to the writer. It examines Acker’s written, spoken, and performed work, and her amorphous, tarantula-like legacy.

Speaking of her own lasting affect, Acker once said: “I broke rules… what is said to me most often is that people felt freed by my writing to do what they want to do, rather than what they are told to do.”

Below, artists, writers, and curators tell us about their own relationship to Acker’s radical, enduring presence. 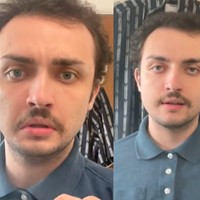 Mortimer  is a writer and poet occupied with experimental queer and trans narratives. Mortimer is leading the second in a series of reading groups on Acker’s writings on June 20.

“I’m not an Acker worshipper, I find lots of her stuff impenetrable to be honest, but her public image has always been important to me as a trans masc person. Her sore thumb blonde crew cut, her arms and her tattoos – all that leather! She was like a genet muse come to life – except butch and AFAB! Acker has certainly made it more possible for writers of the non-cis-straight-man variety to infiltrate the rigidly coded art and writing scenes. As someone working with formal experimentation in the genre of queer autobiography, Acker looms large for me for sure. Although she always did say ‘autobiography was terribly boring’ didn’t she.”

Linda Stupart is an artist, writer and educator based in London and is interested in objectification, abjection, science fiction and revenge. Stupart and Carl Gent will be performing a specially commissioned play they have co-written called All Us Girls Have Been Dead For So Long on July 5. Stupart is also exhibiting a wall drawing and excerpt of a text in the exhibition.

“Kathy Acker’s writing is the best writing, because it understands language as material – so there’s no ‘aboutness’ or distance – everything does what it is saying (think about a ‘cut up’ text when a text is also a body of writing).  Even though Kathy Acker is/was obviously very sexy and into having sex with everyone (i.e. definitely not straight), it is important not to look at pictures of her but read her writing – her I as it is constituted by and in writing. That’s where the good things are.”

Bhanu Kapil is a British-Indian writer, poet and teacher based in Colorado. Kapil is presenting a new performance in response to Kathy Acker’s ideas of the body on June 19 and exhibiting an audio work in the exhibition.

“What I want to think about, for this upcoming performance, is how the language of the body – its exposure, in particular, or the way in which it is bound or viewed – might happen differently for me as a woman from a non-white, non-native European background, than it might, for another kind of body in another kind of social location. Of course, I’m thinking of Acker’s physical presence: the performances that came before, or near, or for, or never, for the novel.

Kathy Acker, Birth of the Wildheart: ‘Eat lunch in the garden of that museum. She didn't care about art. She had persuaded the museum's custodian to let her in thro a private entrance located in the back of that building. As if she was royalty. There she would walk past the Henry Moore statues to the table at which she always had lunch. If someone was sitting there, she would stand over them about an inch away from them, this tiny old woman who could stand only by shaking with her coiffure piled-up silver-&-blue hair.’

I mean, I’d never do that, having been well-trained to defer (at the cost, at times, of my own well-being) to my elders. If Acker wrote the ‘wild heart’, then that’s what I want to do. I want to wash a heart. I want to make visible what is never visible: the insides of the body without end. Or perhaps my performance can happen at lunchtime, and perhaps we can exit the curation through its anus. I don't know what that means.

One thing I can say is that, this June in the ICA, I will be (almost precisely) the age that Kathy Acker was when she died. I want to write a sentence that shakes. I want there to be blood in the line, and on the floor beneath it. Writing these words, I remember visiting a house in Los Angeles where Matias Viegener had stored Kathy Acker’s desk, and also the rug on the floor of the room in which she wrote. I, and the Mexican poets, had slipped downstairs, away from the soiree, an event that centered the English poet (who was very nice) visiting from East Anglia. I don't know how this happened, but soon we (Dolores Dorantes, Myriam Moscana, and I) were rolling around on that rug, laughing and happy to think about it being Kathy Acker’s carpet, that her feet had been on it, or her boots.  And I showed them Genet’s obituary, taped to the desk itself, and we touched it, with our fingertips, which were pink and brown. Yes, I want to wash a heart and watch it melt.”

“Kathy Acker opened my mind and opened my legs. Never have my thoughts about the world, personal actions, choices, and behaviour ever been better validated by Acker’s fearless writing. Her work is precious and neglected because of stagnant power structures that exist within the world of ‘culture’ but she is more important than the vast majority of ‘radical’ men of the 20th century. Her work is not likeable, but to be likeable is to fail in passion.”

Caspar Heinemann is an artist, writer, and poet based in London and Berlin, interested in queer mysticism, experimental poetics, countercultural aesthetics and queer biosemiotics. Heinemann is exhibiting a video work in the exhibition.

“I don’t always know if I know if I like Kathy Acker, but even and especially when I am sure that I don’t, I feel grateful to be an ungrateful son.”

Penny Goring is an artist and poet based in London, whose work addresses grief, addiction, trauma, anger, fear, violence, and ageing. Goring is exhibiting a video work and a series of sculptures in the exhibition.

“Kathy Acker has been dead 20 years and I’m nearly 60. that's what I’ve been thinking about today.”