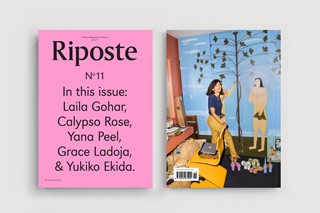 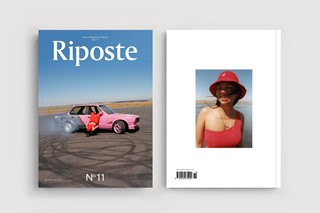 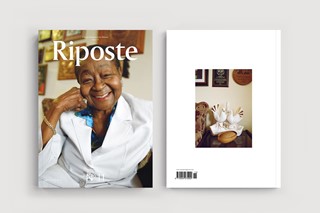 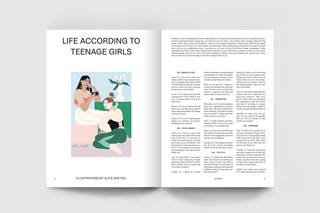 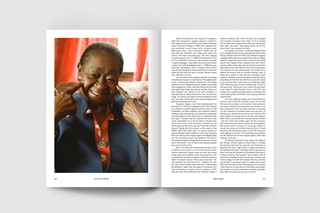 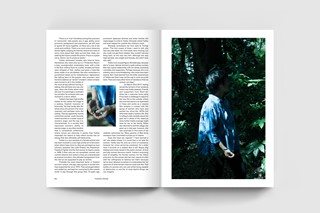 “I’m not really interested in presenting an issue related to one,” responds Riposte founder and editor, Danielle Pender, when asked what theme holds the latest issue (#11) together. Nodding to the multifaceted natures of the women who read it, she observes, “They’re not just one thing on any one day. They have lots of different interests and passions and I want to cater to that.” This means that within the space of a few pages, readers can be taken from commentaries on modern dating to the nomadic Olympics, and an interview with Yukiko Ekida, a convicted female terrorist. “I interviewed Tina Brown last year and she said the best thing a magazine can do is surprise its reader. I 100 per cent agree with that,” explains Pender. “As life online and on social media becomes dictated by what’s popular and it becomes really formulaic I want to make Riposte a place where you don’t know what’s going to come next.”

It’s with this mentality that Pender decided to commission Charlotte Jansen to interview Ekida. In the early 70s, Ekida was disillusioned by the aftermath of Japanese Imperialism after meeting women whose lives had been destroyed by the army’s tactics during the war, and found herself tangled up a radical far-left underground group of activists known as the East Asia Anti-Japan Armed Front. Come 1975, the group had organised a series of bombings on corporate Japanese buildings which left 20 injured. After two decades on the run, Ekida was tracked to Romania and extradited to Japan where she spent 15 years in one of its most notorious prisons for her central role in the major terror attack. Now 66, she was released in March 2017.

While the focus on Ekida might feel controversial, Jansen insists that shining light on all sides of femininity is important to understanding ourselves, and our world. In the article, she writes: “We're too used to the idea that femininity is the antithesis of violence, that it's unwomanly to feel that kind of political rage and anger. Women do terrible things, they're capable of this kind of act, and we don't talk about that in any depth.”

Elsewhere in the issue, Shaniqwa Jarvis took photographs of “the queen of calypso and carnival”, Calypso Rose. It was a story which struck close to the heart of the photographer, who grew up in a West Indian household which played Rose “all the time”. Jarvis remarks, “I loved that Riposte wanted to highlight and photograph an older creative black woman. I find that knowledge is missing from most conversations today.” The photographer adds that Rose was full of energy and love, as well as funny stories from her career and that she brought along – in Rose’s words – “fancy wine from France” as a gift to the crew.

Sophie Jane Stafford met and photographed women from the World Nomad Games. The event brings together people from a range of countries like Kyrgyzstan, Uzbekistan, Russia, Turkey to compete in various sporting events such as martial arts, mounted archery, and national wrestling, all whilst wearing specific national and regional dress. Travelling to Kyrgyzstan – where the event was recently held – Stafford was fixated by the young women “dressed like works of art”. She says, “My plan was to focus on the subtle or distinctive differences of fashion between regions and countries at the event, and with that, a world of women opened up to me.” The most memorable element, she says, was the noise. “As part of the traditional Kyrgyz outfits they attach corals and jewellery to two long braids, which is different, some more or less for each woman. When walking it creates a jingling sound, similar to a bag of coins being shaken. And when they are together in a group, it becomes quite distinctive.”

Photographer Nina Manandhar documented young Muslim women who fence. A collaboration between charity Maslaha and British Fencing, the initiative arms women with the tools to take on the sport, but with confidence, and the chance to dispel stereotypes, embrace self-expression, and explore identity. Manandhar says she spent a lot of time building up a relationship with the group before taking her camera out. “For me, it’s not just turning up and pointing a camera at people – there is a bit more of an exchange going on.” For her, she found the cross-section of “the old British elite mixed up with contemporary diverse British society” and the way “it plays out in an urban setting rather than an old Manor house” fascinating. “I loved the way the girls at Wapping High fence against the London skyline, it’s a powerful metaphor growing up in this often tough but loveable city.”

Issue 11 of Riposte also introduces the “AGENDA” section, a 20-page segment curated by a different woman, centred around a theme for each issue. The inaugural section is courtesy of Seetal Solanki’s Ma-tt-er studio, which explores sustainability through articles, essays, and interviews. The new addition stems from Pender’s refusal to pigeon-hole an entire issue with a theme, but adds that she was “interested in taking one theme and looking at it from lots of angles”. Pender says, “Ma-tt-er ask what our material futures will look like and explore alternatives to plastic. They question how the fashion industry can operate in a more sustainable way and what part we can all play in designing a new future.”

In terms of Riposte’s dedication to being a truly global publication, Pender says, “I feel really passionate about staying as open as possible, to reach out to people from across the world and share their stories.”

The new issue of Riposte is available to order here. Keep an eye out for upcoming events this spring linked to the new issue – and a big summer event which will be launched in May