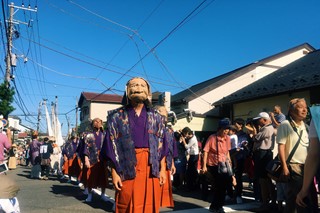 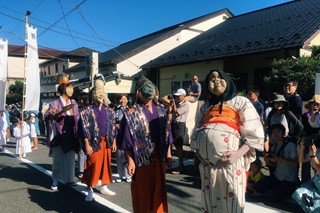 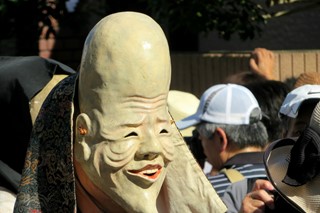 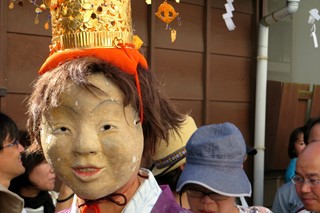 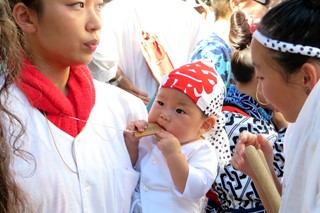 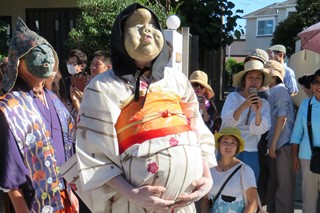 With Halloween just a few weeks away, upwards of 100,000 people are once again set to take over the streets of Shibuya for what has become one of the world’s biggest costume parties. However, in Japan, dressing up in grotesque masks and surreal outfits isn’t just reserved for Halloween. At the annual Penis Festival in Kawasaki, for example, revelers can be seen sporting cock-nosed glasses – while at the Ofudamaki cross-dressing festival in Yokohama, you’ll see rows upon rows of yellow teeth grinning through white make-up.

Another unique traditional festival – albeit one with more ancient origins – is Menkake Gyoretsu: a procession that’s over 200 years old where those taking part wear grotesque, Lynchian masks. The origin of the festival is disputed, but legend has it that when Yoritomo Minamoto – one of the first samurai leaders in Japan – impregnated a girl, her family had to wear masks when visiting him in order to conceal their identities and consequently their poorer backgrounds. Today’s procession by the ten masked men is a novelty that can be seen nowhere else, and has therefore been designated an Intangible Cultural Asset by the Prefectural Government of Kanagawa. Why only men march in masks is unclear – women participate in the rest of the procession, but do not cover their faces.

Attending the procession in Kamakura, I was reminded just how easy it is to escape the urban madness of Tokyo and surround yourself in simpler times. Just an hour away by train, the unassuming setting of Goryo Shrine – which dates back to the late 11th century – is a far cry from the skyscraper visions of modern Tokyo. Here at Goryo, a few hundred local people gathered to watch the procession featuring some well known characters from Japanese folklore. The star of the show was Fukurokuju, one of the Japanese Seven Gods of Luck. With his massive head and deranged grin, he would have looked right at home in one of David Lynch’s earlier works. Other creatures walking the otherwise quiet backstreets included a Tengu – or long-nosed goblin – and Oni, a Japanese devil or demon.

Dancing around at the back of the procession was a man dressed as Okame – the goddess of good fortune whose pregnancy is a symbol of good luck for upcoming harvests and childbirth. Women from the crowd were invited to come forward and touch her stomach for their own safe and healthy pregnancies.

Small local festivals such as this are what keep the spirit of ancient Japan alive – and while the neighbouring districts of central Tokyo may be growing upwards in preparation for the 2020 Olympics, it’s reassuring to know that some things will never change. 200 years on, these masks are still being shown off to the world.