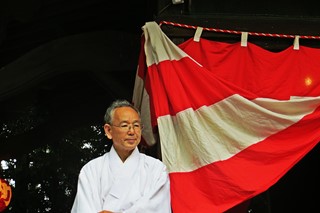 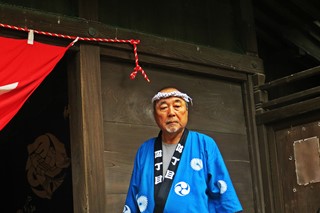 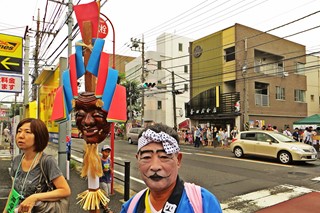 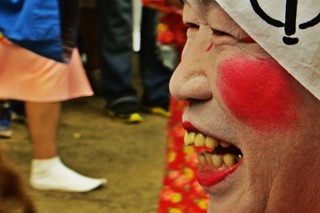 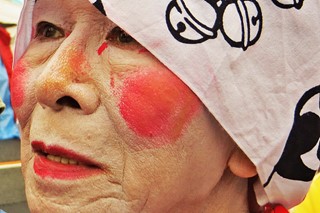 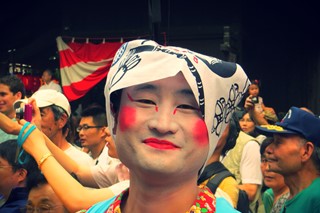 As I step off the train at Totsuka, a small station ten minutes away from Yokohama, it begins to pour. Hundreds of people in colourful kimonos rush for cover, juggling thin plates of yakisoba (fried noodles) and cans of beer. Kids with replica toy guns chase each other down dark alleyways, while stall owners frantically scramble to unwind their awnings before their stock turns to mush.

I pass an elementary school which has recently been painted white. The sky is so heavy with clouds that I can’t see where the school ends and the sky begins. I ask a policeman for directions. He nods down the street. I continue. The sky is grey and ominous, and the thunder hits just as I reach Yasaka shrine. Trying (and failing) to take shelter, I accidentally bump into an old woman while walking up the steps to the shrine. "Sumimasen," (excuse me) I say. No problem, she smiles. Actually, it’s not a woman after all. It’s a man caked in thick white make-up and lashings of eyeliner.

This is Ofudamaki, an obscure festival held once a year in a nondescript area 50 km from Tokyo. 364 days of the year, the shrine goes unnoticed and untouched. Today though, two-dozen men dressed as women invade it and begin dancing in a circle, thrusting their hips in unison and singing traditional songs. Japan has a long history of cross-dressing, with both traditional kabuki theatre and modern-day cosplay both embracing it. For centuries, kabuki actors have been dressing as beautiful women, with young males – known as wakashu – playing the onnagata (female) role. Japan isn’t alone in this respect of course. English theatre during Shakespeare’s day was a male-only affair, with young boys playing the female parts. However, as time passed, women entered the scene. In kabuki, this never happened.

As far as festivals go, Ofudamaki, has rather ominous origins. The festival was originally established during a deadly cholera outbreak in 1688 when mothers gave their clothes to male Shinto dancers in the hopes of bringing protection to themselves and their children. And so, once a year, local men, dressed in women's kimono and traditional make-up, travel around the neighbourhood, stopping periodically to chant and release ofuda (fortunes written on paper strips) into the crowd. It is said that visitors who are lucky enough to receive ofuda will be safe from harm for the next year.

As the skies cleared, so did the crowds, leaving the shade of the shrine to join the dancers as they paraded down the street. Against a backdrop of humidity, hundreds sang in chorus, with rows upon rows of yellow teeth showing through white make-up. Enchanting, surreal and even a little ghoulish, Ofudamaki is a festival caked in make-up and tradition, and one of the most interesting Japanese festivals I've been to.