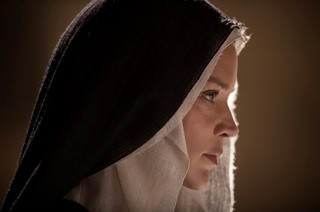 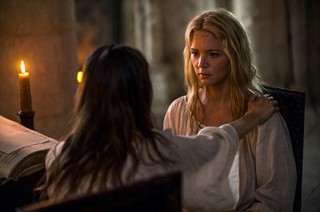 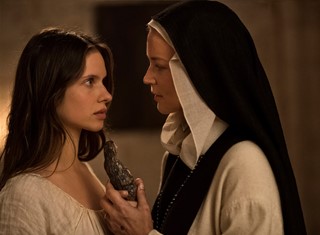 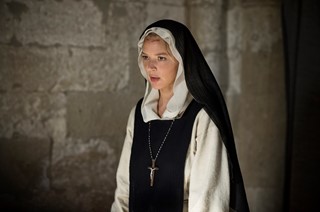 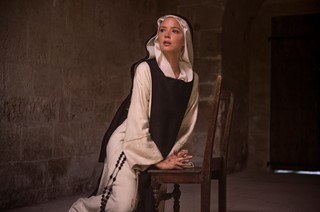 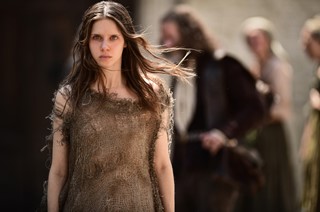 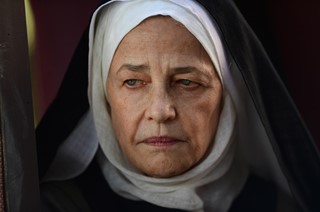 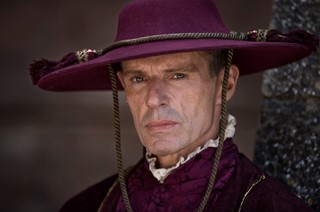 When Paul Verhoeven bumped into Virginie Efira in late 2015, he didn’t know who she was. By that point, Efira was already well-known in French and Belgian cinema, having gained fame previously as a TV presenter. More crucially, Verhoeven had shot Efira earlier that year in his revenge-thriller Elle. “Paul said he didn’t recognise me because I was so elegant in Elle,” Efira recalls, laughing. “He implied I wasn’t elegant in real life.”

In Elle, Efira depicts a rapist’s wife, a character who’s seemingly oblivious until she reveals at the end she knew her husband’s crimes all along. The inscrutability lends itself to Efira’s spectacular turn as the titular nun of Verhoeven’s latest feature, Benedetta. Inspired by a real 17th-century figure, Benedetta Carlini causes a scandal by having a lesbian relationship and claiming to communicate with God. The latter occurs with Benedetta surrendering her body to higher powers, which raises a question: when Benedetta moans and groans, her eyes rolling to the back of her head, is she actually faking it?

“If you read about the real Benedetta, it’s implied she was mentally ill,” Efira tells me, via an interpreter, over Zoom, lounging on a sofa in Brittany. “But Paul’s the master of ambiguity. We never know what she wants. Is it just to lock the door and make love? Or is it something more transcendent than that?”

Efira, 44, to UK cinephiles, is a skilled, auteur-friendly Belgian actor known for An Impossible Love, Sibyl, and having a whole episode of Call My Agent! dedicated to her. Since 2016, Efira’s received five César nominations, the latest one for Benedetta, and she speaks to me during the shoot for Rodeo, one of her many upcoming features. However, Efira’s 20s were spent as a French-speaking Claudia Winkleman, hosting reality shows such as Nouvelle Star. While UK viewers probably missed France’s version of The X Factor, Efira’s background emerges in Benedetta’s declarative outbursts.

“I love Showgirls,” Efira enthuses. “I love the exaggeration Paul uses in his filmmaking. I think the tone is reflected in why he chose me for this role. I don’t look ill or weak. I look strong and healthy. I didn’t change my hair. I injected a contemporary element into the film.”

At the convent, Benedetta feuds, flirts, then eventually frolics in bed with Sister Bartolomea, a rebellious nun played by Daphne Patakia. It’s a thorny relationship that unfolds like a game of strip chess. Yet on a separate Zoom call from Paris, Patakia tells me, “When I met Paul, I asked if we were going to do rehearsals, and he said, ‘You know what to do.’ I was like, ‘Wow. OK. I’m not sure I know.’”

Patakia, a 29-year-old Greek actor who grew up in Belgium, was also the star of Yorgos Lanthimos’s Nimic, so she’s used to ambiguous auteurs. “Paul would give me a specific direction, like, ‘You’re doing this because you’re in love with her.’ He would turn around, then come back and say, ‘Or maybe not.’ Which, for me, makes sense. Paul’s movies are acrobatic. You never know: is it a comedy or a drama? Is it kitsch on purpose? Is she telling the truth? Is she crazy?”

So is Efira playing Jesus? “Benedetta considers herself inferior to Jesus. But when she’s completely delirious, she feels like she’s not only his equal, but sometimes above him, and completely invincible. She can walk through fire. Nothing can touch her.” What about Trump? “When Paul wasn’t talking about the film, it was all about Trump. He was very concerned about the global situation. For me, the correlation is when Benedetta starts to believe that it’s real. That’s what brings her downfall.”

When I tell Patakia what Efira said, she’s surprised. “I’ve never heard Virginie mention Trump before, but it makes sense.” For her own preparation, Patakia watched Verhoeven’s filmography (her favourite is Flesh+Blood), read Judith C. Brown’s Immodest Acts: The Life of a Lesbian Nun in Renaissance Italy, and imagined Bartolomea’s childhood on a farm. “She used to have sheep, so I thought of her as a wild, little goat.” Patakia pauses. “I don’t know if that sounds ridiculous: my inspiration was a goat!”

“We had a sex scene that took two days to film. After the two days, me and Daphne actually thanked Paul because it was such a joyful scene to work on” – Virginie Efira

I bring up another piece of online gossip: before Isabelle Huppert took on Elle, it was allegedly rejected by Hollywood A-listers such as Julianne Moore and Nicole Kidman. Are European actors bolder in their choices? Efira defends Moore and Kidman, asserting that they take on “brave” projects, but says, “In France, there’s less of a puritanical approach to sex. Paul’s films, including Elle, are very feminist, but they’re feminist in a way that’s not obvious. They’re over-the-top. They’re sexually explicit. That’s not something you really see with women over 50 onscreen. So maybe that’s scary. In the US, issues around sex and religion are more taboo than they’d be in France... But I discovered Paul through Basic Instinct and watched all his films. What I felt, even before #MeToo, was that he portrayed women as sexual beings that also had brains. One didn’t negate the other.”

Recently, Verhoeven declared that if Benedetta were filmed today, he’d decline an intimacy coordinator. Efira agrees. “When you have a director that’s intelligent, kind, and professional, and you have a partner that’s onboard as well, there’s no reason why it shouldn’t be done without respect and consent,” she says. “With this film, we came in prepared. There was a lot of communication. Everyone knew what they were doing. Everyone had their boundaries respected, and people weren’t afraid to speak out.

“We had a sex scene that took two days to film. After the two days, me and Daphne actually thanked Paul because it was such a joyful scene to work on.”

“Sex is part of Paul’s cinematic universe,” Patakia adds. “The sex scene in Basic Instinct isn’t sexy, it’s scary. You’re anxious about when she’s going to take the ice pick and kill him. The sex scene in Showgirls is so over the top, that it’s funny. And in Benedetta, the sex scenes have humour to them. They’re always about many things.”

While some filmmakers are famed for a visual aesthetic, Verhoeven’s fingerprints are more tonal. In Benedetta, a bird shits onto a man’s face; when a statue collapses, the wooden nipple lands, of all places, right above Benedetta’s open mouth. Efira, a specialist in zany comedies like Bye Bye Morons, thus delivers an outsized performance that seems possessed in more ways than one. After takes, Efira would stand behind Verhoeven’s monitor and adjust her positioning accordingly. “I had a lot of leeway to offer suggestions,” Efira says. “Sometimes Paul would say, ‘It’s weird, but I like it.’”

Before she returns to her film shoot, can Efira share an example? “When Benedetta has an orgasm, I wanted it to be completely over the top, to really exaggerate the reaction so that it looks like she’s queen of the world. She feels extremely powerful. It’s very exaggerated because it’s not like in a few days you discover sex and then you’re suddenly the master of it.”

Efira adds, “The character of Benedetta, I had to understand what would drive her because the actions didn’t always make sense. She prays, and then she masturbates. I had to dig into those impulses that she has, and I chose to express them this way.”

Benedetta is out in cinemas in the UK and Ireland on 15 April and streaming exclusively on MUBI from July 1. However, tonight, a preview of the film will mark the debut of a new partnership between Dazed and MUBI get your tickets here.