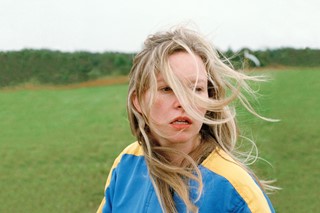 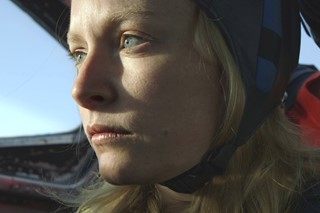 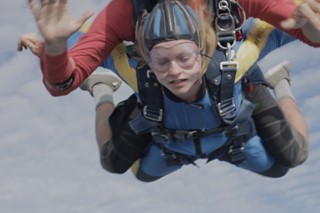 Astronauts often remark that space travel grants them a new perspective on life. By jetting off in a rocket ship past the Kármán line, highly skilled space explorers and divorced ex-CEOs of Amazon get to gaze back down at Earth with fresh eyes, gaining an epiphany about the planet they may not wish to return to. For Anne (Deragh Campbell), a perennially anxious kindergarten teacher, skydiving offers a more affordable alternative.

Written and directed by Kazik Radwanski, Anne at 13,000 Ft. is an engrossing character study of a young woman who, on Toronto soil, frets and stresses in ordinary situations. Surrounded by kids at school, Anne executes lesson plans with warmth and mutual affection, except her methods are chastised by a work colleague with a passive aggressive streak. (Bring a hot drink into a classroom? How dare you!) On dates and social occasions, Anne’s jokes fall flat, and so too do her attempts to deflate awkwardness by pointing out her failed punchlines. Often, she’s deeply lonely; in the presence of her well-meaning but overbearing mother, her only wish is for complete isolation. Eventually the viewer deduces that Anne has a history with mental illness, a revelation that clarifies why she’s obsessively monitored at her job, at family events, and everywhere within touching distance of the ground.

“We talked to medical experts, and read memoirs of people who survived being in mental health facilities and institutions,” Radwanski tells me over Zoom, from Toronto, in the week Anne at 13,000 Ft. launches on MUBI in the UK. “We talked to people in our lives. We almost did too much research, and were sort of overburdened by it.”

Anne’s past is never fully explained in the film – the details of her nervous breakdown at university were removed from the final edit. Subsequently, Anne behaves in each scene as if she’s hiding a deep secret, a metaphorical rucksack on her shoulders. “We really embraced ellipses,” the Canadian filmmaker continues. “People don’t share their lives with everyone. We always get that piece of expository dialogue like: ‘This is why I am that way.’ You sense that tension from time to time. That was always a goal, that a lot of the film was her re-entering society, and overcoming a past trauma.”

When Anne meets flirty, oversharing Matt (Matt Johnson) at a wedding, it’s when, in a normal film, the protagonist would deliver the explanatory monologue – but instead Anne runs off to vomit in the bathroom. “She doesn’t relate to Matt. He talks about Everquest. I like those moments in films where people aren’t interested in somebody’s story, or they don’t reciprocate. She just walks away.”

Anne at 13,000 Ft. is the third feature from Radwanski, who bravely confirms to me that he’s 36, despite Wikipedia’s suggestion that he’s 35. After starting out with 2012’s Tower, also an exploration of social anxiety with a height-related title, Radwanski received even more plaudits for 2015’s How Heavy This Hammer, a drama about a family man who plays computer games while his homelife disintegrates. “My previous two features were about very unlikeable men,” Radwanski says. “I was excited to work with Deragh, who can be complicated but inherently likeable.

”I like viewing the day care as a microcosm of society, with these rules and structures in place, which in some ways are alienating but are there for a reason” – Kazik Radwanski

“This feature, in a lot of ways, was inspired by my mother, who plays the supervisor. The day care is a female-dominant environment. At the staff meeting, there’s 20 women that have worked together for years.” He doesn’t deny the impact of Maren Ade’s hugely underseen The Forest for the Trees, also about a kindergarten teacher struggling to fit in. “That was an influence on my first film, too. My mother was a day care supervisor for 40 years, and a number of teachers who work in that day care are in the film as well… I like viewing the day care as a microcosm of society, with these rules and structures in place, which in some ways are alienating but are there for a reason.”

Shot in close-ups like Gena Rowlands in a Cassavetes movie, Campbell captivates throughout with facial gestures so subtle that they can’t be scripted. Both introverted and prone to rash, emotional outbursts, Anne is a three-dimensional character carved out of two years of filming and script revisions. As a result, the dialogue never feels underwritten, but the patience allows for natural performances to flourish and characters to evolve. Campbell, who won the Jay Scott Prize for playing Anne, notably has an “additional writing” credit.

“It’s like a documentary,” Radwanski explains. “We’re not on set for two years straight. It’s shot sporadically. On my earlier films, when I had no money, and we all had jobs, I got in the habit of shooting on weekends and evenings. As I got more access and funding, I kept that – I like shooting something, editing it, thinking about it, and shooting some more.”

At the same time, the film, though it can be funny, particularly when Anne retaliates against authority figures and social cues, never descends into sitcom territory that compromises the pathos. “I suppose all my films are dramatic and a little depressing and a little introspective. I almost rely on spontaneity to make it more true to life. Through that spontaneity, we find humour. You fall in love with bits of dialogue. Sometimes bits are obviously funny, and sometimes they’re funny because they’re awkward. But I like that sensation of not knowing whether to laugh or cry.”

“I suppose all my films are dramatic and a little depressing and a little introspective. I almost rely on spontaneity to make it more true to life” – Kazik Radwanski

For the skydiving shots, Campbell did the leap herself. “Inside the plane, that’s Deragh’s first jump,” Radwanski says. “She’s looking out the window, and she’s petrified. That expression on her face is how she felt the first time she jumped out of the plane.” However, upon rewatching footage of Anne falling through the sky, Radwanski wasn’t satisfied with the lens choice. So Radwanski and his cinematographer, afraid to tell Campbell, went skydiving for the first time themselves for additional camera tests. The solution was a 4K GoPro, not attempting to mimic the lens from the rest of the film. “We showed the footage to Deragh, and she agreed to shoot it again.”

Does Radwanski recommend skydiving as a method of curing social anxiety? “No! Neither Deragh nor I like skydiving. It clicked with the character, but we don’t enjoy it.”

For the parachuting moments, Radwanski cites two films in particular, Leos Carax’s Mauvais sang and Harmony Korine’s Mister Lonely. In Carax’s sci-fi romance, a woman passes out as she soars through the air (“how Juliette Binoche closes her eyes, I think that inspired the sequence”); in Korine’s comedy, which has Carax in a cameo, Werner Herzog encourages nuns to skydive without backpacks. “I think those were in my subconscious, and led to me being like, ‘Wow, what if we tried this? What if we took it this far?’”

Another comparison I spotted is Being John Malkovich. By later positioning the camera strictly inside the plane, Radwanski captures Anne jumping out the door, as if it’s an escape portal into another world – the parachute is incidental. “No one’s made the Malkovich comparison but I can see that for sure,” Radwanski says, perhaps out of politeness. “That shot is empowering. She’s jumping alone for the first time. But there’s something terrifying about it. Some people view it as unhappy, and say it feels almost like suicide – that it’s too reckless, that she’s throwing herself out into the void. I like those mixed meanings, that people can view it as optimistic or going in the wrong direction.”

Also, in the scene just before, Anne threatens to dive out of a moving car – was the juxtaposition intentional? “Yeah. Opening the door and hearing the wind is reminiscent of opening the plane hatch. Not being a passenger, and jumping out of a vehicle, is a metaphor.”

”I’m interested in somewhat evasive mental health conditions that aren’t quite pointed out, but also how people fit into society” – Kazik Radwanski

Despite COVID affecting its release, Anne at 13,000 Ft. has received almost universal acclaim, with the only major outlier being the New York Times. Radwanski takes it all in good humour, commenting, “My work in general has always been divisive. It’s almost strange that it’s been so positive. It was almost reassuring that (the New York Times didn’t like it). I was like, ‘Of course. This isn’t for everyone. This is a film entirely in close-ups, with a character that’s hard to empathise with.”

Radwanski is already writing his next film, which he hopes will star Campbell and Johnson, and cryptically refers to it as “a reaction to this film” and “trying to understand why people act a certain way”. Otherwise, he expects it to further delve into what he refers to as his two main filmmaking obsessions: social anxiety and depression.

“I’m interested in somewhat evasive mental health conditions that aren’t quite pointed out, but also how people fit into society,” Radwanski says. “I always focus on people that don’t. For some reason, I’ve always gravitated to that in my work. I think that’s why I came to cinema. I had a hard time verbalising it and writing about it, but somehow, through watching films and making films, it was cathartic for me to explore these feelings of these very lonely characters. Somehow, cinema has always been a nice place for these lonely explorations.”