The filmmaker is also writing a ‘moving’ book about Hiroo Onoda, the Japanese soldier who refused to surrender at the end of WWII 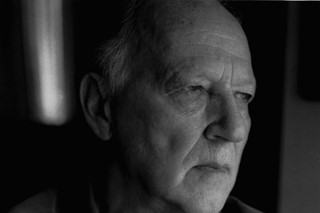 Werner Herzog is set to publish his first new books in several years, including a memoir that will span his life and seminal filmmaking career. Announced as part of a two-book deal with The Bodley Head, the memoir will come in the wake of a new book that tells the story of Hiroo Onoda, titled The Twilight World, and translated by the poet Michael Hofmann.

Onoda was an intelligence officer in the Imperial Japanese Army, who fought in World War II and refused to surrender in 1945, believing news about the end of the war to be propaganda from the opposite side. He eventually came out of his post in the Philippine jungle almost three decades later, in 1974, when his former commander was sent to relieve him. He later became a farmer and opened nature camps for children in Japan, and died aged 91 in 2014.

Herzog’s “moving portrait of Onoda’s seemingly senseless struggle offers a profound meditation of the human condition,” says Bodley Head editorial director Jörg Hensgen. “Building an opera house in the middle of the jungle; walking from Munich to Paris in the dead of winter; descending into an active volcano; living in the wilderness among grizzly bears – Werner Herzog has always been intrigued by extremes of human experience.”

The German filmmaker’s book on Onoda is set to be published next summer, with his memoir to follow in 2023. The latter will be “filled to the brim with memorable stories and poignant observations”, says Hensgen, and will explore a career that has included wild productions such as Fitzcarraldo and Aguirre, the Wrath of God, as well as more recent documentaries on the digital age, volcanoes, and shooting stars.

Herzog previously published a book that reflected on the making of Fitzcarraldo, titled Conquest of the Useless, back in 2004. In 1978, meanwhile, he documented a walk from Munich to Paris he undertook to visit his ill mentor, Lotte Eisner, in the book Of Walking in Ice.

While you wait for the (inevitably bizarre) tales that his new memoir has to offer, revisit some of the craziest tales and poetic ‘Wernerisms’ from his life here.