The colourful designer impressed with tailoring, positive messages and ponchos made out of jackets and knitwear 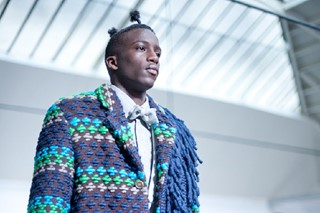 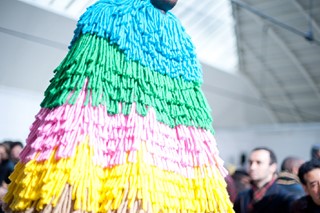 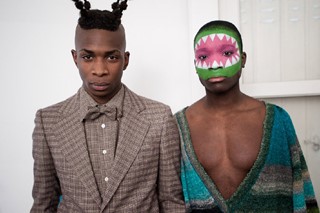 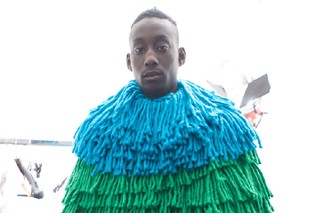 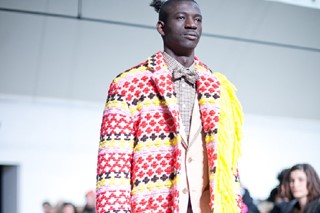 Walter added a strong formal arrow to his sartorial bow on Friday. With much tailoring, shirts and bow ties, the Belgian designer gave us another peek into his creative mind. But there was of course a few details that made this a Walter Van Beirendonck show; worded messages ('Hand on Heart') was displayed, jackets and tops were sliced on the sides creating ponchos when not buttoned up, massive metal rings orbited around the model's heads and there was a general colourfulness. Prints, patterns and colours mismatched, and pink and aqua blue was teamed up with beige and brown. But it was the last few looks of hairy fabric coats and Chanel-esque cropped jackets that impressed the most.

Dazed Digital: What was the initial inspiration for the collection?
Walter Van Beirendonck: It's all about a new kind of shamanism, so it's about the spiritual world, and I feel we're going towards a new spiritual world. I tried to illustrate it by drawing inspiration from an essay Tim Blanks wrote in AnOther Man, it was about the Maya dates and how our lives are going in new direction and I used certain from it.

DD: What words were they?
Walter Van Beirendonck: 'Something big is coming' was the first which was referring to the 2012 date. And 'Dream the world to wake' is also an important statement which I tried to incorporate into the collection.

DD: Also there was a lot more tailoring than you've had of late!
Walter Van Beirendonck: I was attracted by the idea of tailoring mainly because I decided to deconstruct it and open it on the sides with buttons, giving it a wider shape