Kenzo’s Creative Director Antonio Marras talks to Dazed about the clash between Japanese and French styles in the Spring/Summer 2011 menswear collection. 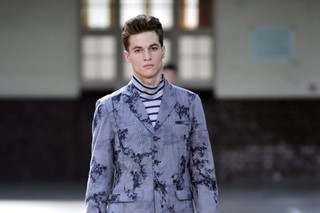 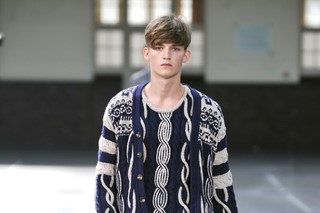 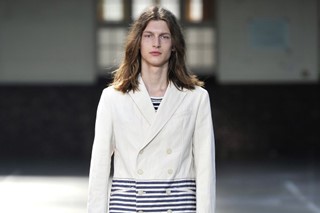 In the autumn of 1964, young Kenzo Takada travelled on a boat all the way to Japan from France, arriving in Marseille on 1st January 1965. The adventurous trip turned along the way into a journey of discovery since the ship made many ports of call that contributed to give the young designer a cultural shock and that influenced in later years his designs. Kenzo’s current creative director Antonio Marras reversed the story: the Alghero-born designer knows very well that travelling is encoded in the fashion house’s DNA and took Kenzo’s destination, the port of Marseille, as a starting point to tell a transnational fashion story.

Traditional white and blue sailor’s stripes were used for classic tops, but also tailored jackets, trench coats and bags and, little by little, prints of large flowers decorating shirts and suits introduced a more exotic theme that climaxed in the suits with subtle Ukiyo-e landscapes. Along the way there were also vivid splashes of red, electric blue, acid green and bright shocking pink, while beige and ivory tones and quilted details brought back a sense of balanced calmness in the collection. Marras’s imaginary and poetic voyage, this tender fable-like story connecting France and Japan, turned into a cultural geography where place, space and landscape met, transforming into a proper wardrobe for men and women as well, as proved by the actresses and female models who walked down the runway donning designs from the menswear collection.

Dazed Digital: Which are the main inspirations and moods for this menswear collection?
Antonio Marras: I would say that it’s a very simple yet striking inspiration, a sort of perfect fusion between two universes, Japanese and Parisian culture. There is indeed a sort of dichotomy between the exotic fabrics and the traditional shape of the white and blue/white and red sailor’s tops or jackets and the typical shirt collar of Parisian bohemians who sit in a cafe smoking and wearing a blue beret. I tried to spark a dialogue between these two universes that are far away and diametrically opposed one to the other, analysing the attraction that may exist between these two worlds at the antipodes that clash and combine in a Parisian brasserie. While creating this collection I had in mind many different men - artists, students and intellectuals - who are self-confident and love to get dressed with garments characterised by a traditional and tailored cut and an unusual mix of fabrics.

DD: What kind of fabrics did you opt for in this collection?
Antonio Marras: I usually carry out an almost maniacal research when it comes to fabrics. We work a lot with French, Italian and Japanese companies experimenting with special treatments, smeared effects, colours, nuances and blends mixing for example linen and cotton or cotton and cashmere. In this particular collection we tried to recreate in prints on the suits the hand-painted flowers decorating the shirts. It’s not obvious to the eye, but if you look well you will detect subtle Japanese landscapes on the suits, while inside the jackets made in more traditional fabrics you will discover little surprises such as coloured linings. I love working on contrasts and adding to garments such special details.

DD: Do you feel that there is an increased attention for menswear?
Antonio Marras: Menswear is usually the first fashion compartment to suffer from a financial crisis because, according to a survey, women buy things for men and, while you can’t cut back on children’s wear, another man’s white shirt is considered as an unnecessary surplus. Yet there are many independent men out there – especially in their thirties or forties – who want to dress well and who carefully pick the garments and accessories for their wardrobe. A while back we did a presentation in collaboration with some magazines in Paris for Kenzo’s menswear and it was a complete success. Women are used to dare in fashion, but, in that occasion, I realised men are definitely becoming more adventurous. I remember seeing at one of our presentations an architect trying on cargo pants and camouflage pieces next to another man trying on a more classic double-breasted suit. That experience also made me realise how important it is for Kenzo’s fashion house to cater for different styles and tastes.

DD: According to you, which designers are bringing fresh perspectives into menswear?
Antonio Marras: I think there is an interesting wave of Japanese designers who are bringing on the runways a new interpretation of Japanese fashion trends. They represent a sort of Japanese “Nouvelle Vague”, a group of innovative people who, while reminding me of Yohji Yamamoto, Comme des Garçons and Kenzo’s early creations, is characterised by strikingly unconventional fashion designs, and that’s exactly what fascinates me about them, since I do prefer extreme avant-garde to banality.