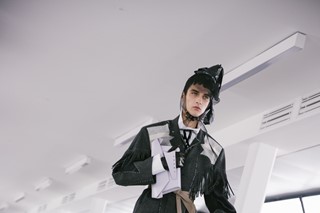 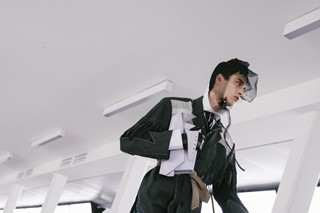 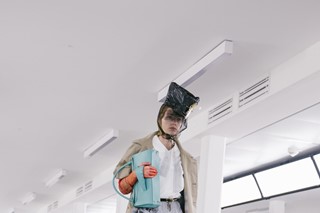 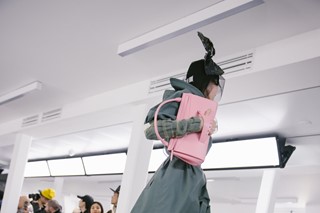 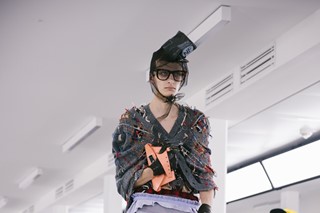 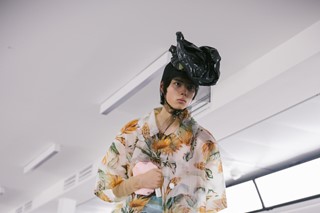 At Margiela, models staggered and stumbled down the runway, lurching forwards with an unsettling urgency. They did this because they had been forced into a new pair of Tabi boots by John Galliano, who tacked a 10-cm heel onto the bovine pump while festooning its upper in rhinestones. It was more Carrie Bradshaw than it was FCP student at Central Saint Martins, transforming the usually quite blockish toe into a delicate pincer. Perhaps Galliano saw Glenn Martens’ patent lobster heels at Y-Project and thought “absolutely not!”

Arriving on the final day of Paris Fashion Week, the Co-Ed 2023 show was something of a sequel to the brand’s most recent couture offering – Cinema Inferno – imagining its fugitive protagonists had eloped and given birth to a lovechild. Staged in Margiela’s new 16ᵉ arrondissement headquarters, showgoers were greeted by wall-to-wall screens with shots of Cinema Inferno beamed on loop, while paint-marked Tabi footsteps – a throwback to Martin Margiela’s first ever fashion show – lured guests into a fantasy crime scene where an old car looked as though it had crashed through a glass roof.

The collection itself was a speculative imagining of what the offspring of those ill-fated lovers might dress like: a hodgepodge repurposing of their aristocratic, runaway costumes. Highwaymen trench coats were blasted in sand and fascinators were jauntily assembled from bin bags and scraps of tulle. Gauzy slips had been hacked into rompers (as if the models had accidentally stepped out with their knickers caught in their skirts) while lavish opera coats were disturbed by the sleazy déshabillé of deconstructed tuxedos. And then there was an unlikely Disney collaboration, with all its anamporhpic cadet hats, novelty t-shirts spliced into corsetry, and the outline of Mickey Mouse’s ears cut into blazer plackets.

Click through the gallery above to see the rest of Margeila’s collection at the AW23 edition of Paris Fashion Week.