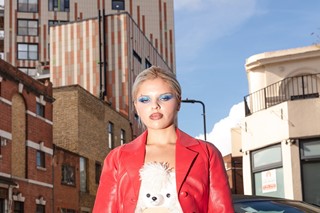 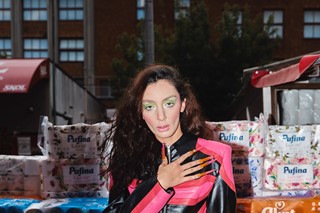 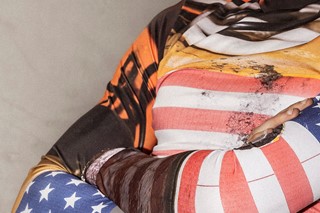 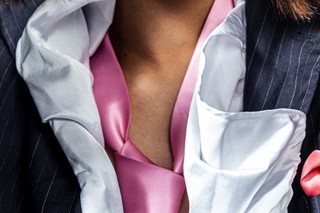 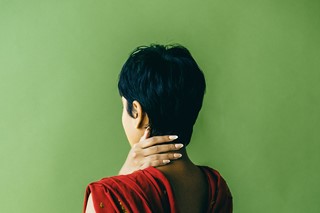 There is a common theme to most of the photography being produced by MA students on Central Saint Martins’ fashion communication course – themselves. Plastered billboard-style across the walls of the Lethaby Gallery are numerous meditations on identity (be that to do with race, gender, or sexuality) in images that speak as much to the creator’s own community as they do culture at large. That’s not to say the work feels myopic or navel-gazing, but that each image-maker uses fashion photography as a means to challenge and renegotiate their place in the world. There are pieces about queer desire, claustrophobic and craving; Indonesian dress, shot documentary-style in Bengkulu; and dual-heritage upbringings, which treat west African tailoring as a form of resistance.

Much like former graduates Campbell Addy and Dazed editor-in-chief IB Kamara, these creatives promise to bring fresh perspectives to fashion, while compounding the long-held dominance of CSM-ers within the industry. “Whenever I’ve tried to follow Western ideals of imagery I’ve ended up drifting further from my own truth,” as student Farid Ghimas says. “Not everyone will understand what I’m communicating, but those who share a similar background to me will find my work relatable.” Exhibited alongside the work of MA fashion journalists and MA fashion critics, this year’s cohort are all distinct in style – running the gamut of sparse, shoot-and-go snaps from Tudor Covaciu, to the woozy black-and-whites of Milli Ollerton. Below, we get to know the five image-makers to watch from CSM’s class of 2022.

“I was born in Guangzhou, China and moved to the UK at the age of 14. Both my parents are painters so I guess I’ve always rejected the idea that I should follow that path – I wanted to explore something on my own and photography came along quite naturally. Funnily enough, I originally wanted to be a fashion designer and I only got into image-making through shooting the dresses I had made for my friends in middle school. Then, slowly, one took over the other.

My approach has changed quite a lot over the years but my practice has always centred on the people I photograph – most of whom I’ve street-casted. I think of my shoots like a collaboration between me and the subjects, and I fill in the rest of the blanks on the day. The uncertainty of that might seem stressful but it’s quite exciting. I don’t make a lot of self-portraits but I’m obsessed with those made by other artists and photographers. Working in both casting and photography I spend most of my time observing other people so maybe the opposite attracts in this sense.”

“I’m originally from Indonesia but moved to the UK in 2018 to study fashion photography at Leeds Arts University. As cliché as it sounds, I first got into photography through Instagram, but back then I was mostly sharing cheesy photographs I took on my travels and portraits of my friends in high school. I’m not very articulate and I’m not really proud of the way I talk. Every time I try to express myself, my words get fumbled – but I’m much better at expressing my feelings through photography. Not everyone will understand what I’m communicating, but those who share similar backgrounds and experiences to me will find my work relatable. That’s the joy of doing this.

My photography is like a mix between documentary and staged portraiture – it’s about finding common ground between myself and the people I photograph and I spend a lot of time getting to know them first. I place an emphasis on caught moments and familiar settings within my life. Jamie Hawkesworth was one of my first photographic idols but recently I’ve been following the work of Jeano Edwards and Malick Bodian – it’s fascinating to see how they apply their vision within commercial confines. I’m fascinated by notions of home and cultural identity, perhaps that’s because I’ve only ever learnt about photography in Eurocentric institutions and I struggled to relate to most of their references.

Whenever I’ve tried to follow Western ideals of imagery I’ve ended up drifting further from my own truth. Some people see my approach to documentary and fashion as separate entities, like my Angan-Angan Harsa series that I shot in Bengkulu, which features portraits of locals wearing school uniforms and motif-patterned head scarves. But, just because these people don’t have access to designer clothes it doesn’t make it any less of a fashion statement. I constantly worried that my work wasn’t good enough at CSM, but I guess that also helped me to keep pushing myself. I think the work I create comes from the joy of revisiting Indonesia.”

“I’m from Switzerland and moved to London to study an undergraduate degree in curation – I think that really helped me to understand how you control a space and tell a story. And one image can say so much. I’m really inspired by cinema, but I love staged documentaries, especially those by Jeff Wall. As a result, my images are narrative-led and I never shoot without a storyline or a character in mind. I love the idea of this being an open-ended narrative – I might have one story in my head but once the image is done, it’s open for interpretation, and anyone can make a story within mine. I frequently return to themes of femininity, sisterhood, relationships, and identity. I always want my models/characters to look strong and experience an emotion. I try to avoid anything too passive in stance or gaze. People think I’m obsessed with shooting outdoors, but this is mostly down to budget, there’s only so much you can work with. Being outdoors is accessible and free – ideally I’d have real-life sets but for now real-life scenery does the trick.”

“I’m a Nigerian and British citizen but a Londoner at heart. Being from two different cultures (and feeling like I fit into neither) has been a lifelong challenge – so communicating these ideas in my work has been a real help to me and others who can relate. Growing up in a Nigerian family where everything was very professional and political, fashion has always been my escape. I’d flip through magazines and feel understood. I’ve always been a daydreamer – constantly creating stories in my mind – and I got into creative direction because it was hard to keep those quiet. I could never just dress models, I wanted to take charge of the narrative, too.

I love working on narrative editorials with documentary-style fashion photographers. James Barnor is a major inspiration: his photos have always made Black people look regal, while photographers like Nadine Ijewere and Campbell Addy have always been able to capture the Black narrative. That couldn’t be achieved without the stylists like Gabriella Karefa-Johnson, Ola Ebiti, and IB Kamara, though. I mainly work with tailored styling because of the relationship those pieces have with west African culture – the idea was that people would be taken more seriously if they dressed in suits. The obsession with western dress and culture saddens me, but it is the reality. I like to recreate those narratives with Black models as a way of regaining control.

It’s not only about race, but sex, too: dressing a woman in a suit is empowering. I also love working with millinery – I loved the process of creating exaggerated hats from the Ankara fabric with a Nigerian milliner. I think people misunderstand what creative direction is about. They think the photographer is responsible for the concept, but, having learnt the craft of communication, I can work with different people while giving the impression of one person. People at CSM are so consumed in their work that they forget to live in the moment – I am very guilty of that, but I love that I’ve had the time to put my practice to the test.”

“I was born in Toronto and previously studied photography at Parsons School of Design in New York, but I’m now based in London. My decision to study photography was very last-minute – I had originally planned to do marketing, but I’m more interested in the idea of escapism and fantasy within fashion, capturing the kinds of moments that people wouldn’t otherwise notice. To me, fashion imagery will always be about beautiful people wearing beautiful clothes in beautiful scenes, but my work asks ‘what is beauty?’, making the perfect normal, transforming exquisiteness into awkwardness, pushing people outside their comfort zone.

My work is about exploring the spaces in between; moments in passing. It depicts a form of queerness, placing models in atypical positions, mixing claustrophobic crops and extravagant scenes. It focuses on the brevity of youth, discovery, and experimentation. One recent project, A Little More Beautiful _ We Would Have Something Completely Different is a collection of photographs that documents the subconscious of attraction. I’m often inspired by attraction, obsession, and the fantasy of fashion – there’s a reason someone is attracted to something. I want to understand why that is and confront it head-on. One day, I’d like someone to feel so much desire that they just rip a photo straight out of my book.

I always feel the best work is when you can feel some part of yourself in it, and the themes I typically return to are the taboo-ness of sex; the performance of identity and appearance; and western masculinity and its physicality. The reality of studying at CSM is that you’ll only get the most out of the programme if you truly understand yourself and are ready to fight for the work that you want to make. You can’t let others lead you astray because every tutor will criticise your work differently. Feel free to take their advice, but you need to stick to your intuition. There is a reason you were accepted, and it is because of how you think.”

The MA: Fashion Communication exhibition runs until December 4 at the Lethaby Gallery in 1 Granary Square, London.