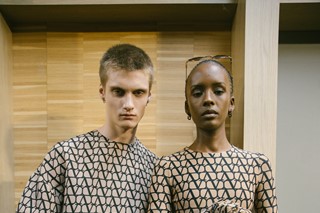 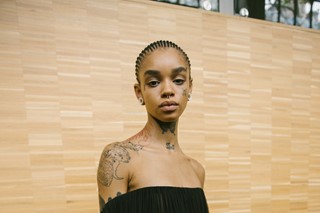 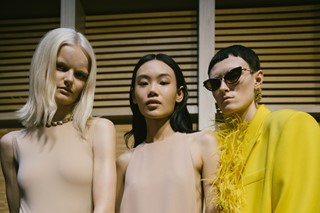 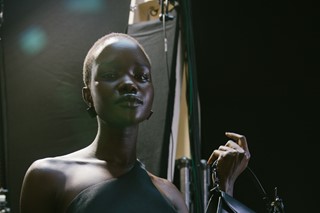 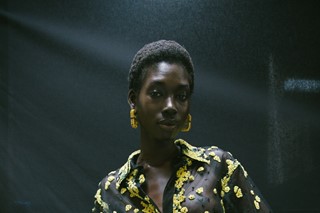 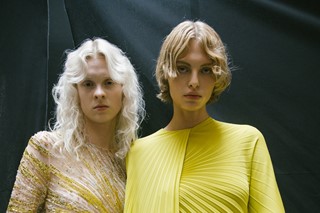 At this season’s Milan and Paris Fashion Weeks, you could always tell when Erykah Badu was arriving.

Like a slow ripple that fans out as a pebble hits the glassy surface of a pond, even the most stony-faced of fashion insiders would begin exchanging excited whispers, subtly – or not so subtly – nudging each other in the ribs, and motioning in her direction with their heads as she was led to her seat. The legendary musician and style icon sat front row at Matthieu Blazy’s sophomore Bottega Veneta show, Thom Browne’s fantastical extravaganza, and Pierpaolo Piccioli’s anticipated Valentino Unboxing as the designer’s very special guest.

At the Valentino show, however, Badu wasn’t just there to take in the collection. Piccioli is known for enlisting a diverse and eclectic range of brilliant musicians to soundtrack his presentations, from FKA twigs taking to the stage for AW20, to Labyrinth, who stood at the top of the Spanish Steps at the house’s AW22 Haute Couture show and performed a goosebump-inducing rendition of his track “Beneath Your Beautiful”. This time, the longtime Erykah Badu fan tracked down her number (or, as is more likely in this biz, had his people call her people) and asked if she would do him the honour of stepping into the role for SS23.

“I have always loved the art that Erykah makes,” he explains to me post-show, as stragglers slowly filter out of the venue and into the crowd of screaming fans waiting for a glimpse of their faves – with the likes of Zendaya and Naomi Campbell among them. “I am trying to build a community of people that share the same values she symbolises. With our jobs, we have a responsibility to stand for something, and deliver social messages to the world. I was sure that, with Erykah, we could deliver a strong message,” he continues. Happily for Piccioli, Badu was into the idea and agreed to be a part of his new-season journey.

What followed was a back-and-forth flurry of phone calls, emails, and text messages as the two worked together from afar. “Actually, this is the first time we met,” says Piccioli on show day. “Did you not need to get a feel for the collection before you came up with the soundtrack?” I ask Badu. “No, it wasn’t necessary to see the clothes,” she replies. “It’s about sharing ideas and coming together to deliver something special together, which I think we did. More important to me was hearing what was in PP’s mind, his thoughts as he was creating his storyboard.”

Where Valentino collections usually roll out onto the runway in a fanfare of feathers, glittering crystals, ostentatious headpieces, and dramatic silhouettes, for SS23, Piccioli was all about stripping things back. “He told me he was doing things backwards this season,” says Badu. “Usually he starts with the body and moves out, but this time he started with the outside and peeled it back.”

Similarly, Badu started big, with the show’s soundtrack kicking off with a rousing sample from classic 1976 movie Network. “I don’t have to tell you things are bad. Everybody knows they are bad. It’s a depression. Everybody’s out of work or scared of losing their job,” rages the film’s protagonist, Howard Beale. “I want you to get up out of your chairs, open the window, stick your head out and yell: ‘I’M MAD AS HELL, AND I’M NOT GOING TO TAKE THIS ANY MORE.”

It may be hard to correlate this message with a Parisian fashion show, in which impossibly glam models strut down a runway in incredibly expensive clothes, but the reality is, fashion has become a global commodity with the power and influence to move the masses. Both Piccioli and Badu have spent their careers using their platforms to speak out on social issues – just through very different mediums. The message at the heart of this collection is one of individuality, and staying true to ourselves and who we are.

“Each piece of clothing, each amulet or talisman or trinket we wear is our own statement,” says Badu. “It can be a political statement. It can be a creative statement. It might be an emotional statement. But all those things usually go together, you know? The way we dress comes back to the emotions and memories that we feel. It’s very, very important that we as people express ourselves,” she adds.

“I am trying to build a community of people that share the same values Erykah symbolises. With our jobs, we have a responsibility to stand for something, and deliver social messages to the world. I was sure that, with Erykah, we could deliver a strong message” – Pierpaolo Piccioli

In this vein, the SS23 Valentino collection was far more wearable than the (admittedly very fab) capes and red carpet-worthy gowns we’ve seen previously from Piccioli, and thanks to that, there were far more ways to put your own spin on things. Pared-back, slinky silhouettes were key, with second-skin bodysuits tucked into sweeping, wide-legged trousers and curve-skimming, high-waisted skirts. Tailoring was loose and louche, with boxy little jackets layered over more nude-toned, skin-tight tops and cute structured cocktail dresses. As the collection evolved (or “devolved”, as Badu puts it), so too did the music, as Beale’s passionate monologue transmuted into an understated instrumental arrangement.

While Piccioli might have held himself back this season when it came to his big, overblown silhouettes, there were still some signature flourishes to be found. There were smatterings of fine feathers that bounced on bodices and pants as the models walked, as well as a series of sparkling crystal looks, in a kaleidoscope of colours, that punctuated the offerng like sweets in tins dug out around Christmas. The only thing missing was the bold fuchsia hue that took over the house for AW22, which was relegated to the front row this time around – for every one of us in ‘normal’ clothes, there were another three attendees wearing pieces from Valentino’s last collection. Even Badu herself was thinking pink when it came to getting ready for the show, with the musician slipping into a feathered cape, hoodie, and matching signature hat for the event.

As our conversation draws to a close, I ask Badu how the show made her feel, and how she is enjoying the fashion week circuit. “Something I loved about today was the resilience of the models who had to walk, and the people who had to sit and listen, to let the stillness wash over them during the show,” she answers. “The combination of all the elements coming together – the art, the clothes, the music – are what make fashion important emotionally and spiritually.” Given Sunday at PFW is a grotty, grey-skied affair dotted with torrential downpours, I also ask if she has any tips for surviving fashion season. “Oh no, no tips,” she laughs. “Just take each day as it comes.”