Pierpaolo Piccioli staged his AW22 Haute Couture show on the Italian landmark, sending out a joyful, kaleidoscopic collection on a brilliantly diverse cast of models 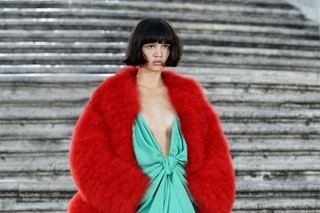 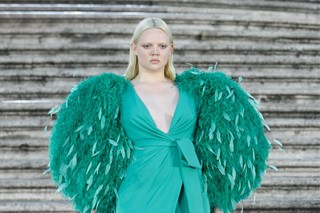 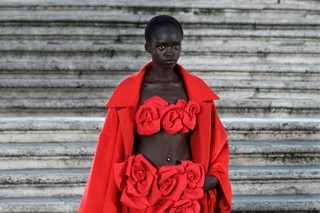 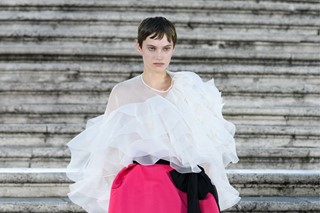 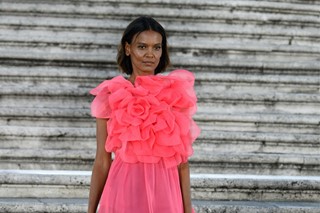 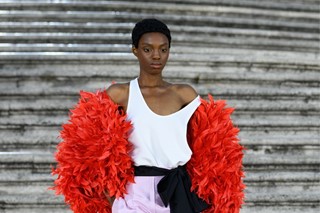 The Paris Haute Couture shows have drawn to a close, but before the curtains fully fall on the AW22 season, there’s the small matter of a Valentino show to tick off the list. This time around, Pierpaolo Piccioli is back in Rome to debut the highest fashions the house has to offer, and as always, Dazed is here to fill you in on what went down. Coming at you from Rome’s hot, dusty, winding streets, here’s everything you need to know.

THE HOUSE CASUALLY SHUT DOWN THE SPANISH STEPS

Life has well and truly returned to Roma post(ish) COVID, as travellers infiltrate the historic city, selfie sticks in hand (yes, apparently we’re really still doing those). Sadly for any tourists looking to get the money shot anywhere up or down the city’s notorious Spanish Steps tonight were in for a disappointment, as Valentino shut the famous monument down for the evening. As the sun began to set and the buildings turned gold, the show kicked off, with residents hanging out of windows throughout the square to get a better look at the Friday night high fashion drama.

THERE WERE SOME VERY SPECIAL GUESTS

…among them Almost Famous icon Kate Hudson, and Ms. Devil Wears Prada, “I have Patrick on the line” herself, Anne Hathaway. Beyond the famous faces, though, were 120 students from the city’s fashion schools. Piccioli made the decision to invite them as he remembered the public Donna Sotto Le Stelle fashion shows that took place on the steps during his teenage years, and just like they did, he wanted to make his own event accessible to a new generation of kids. Quite the fashion show to call your first.

THE CASTING WAS *CHEF’S KISS*

Pierpaolo Piccioli’s shows have always been brilliantly cast, but in recent seasons, the celebrated designer has really upped the stakes. One of the few houses to actually think about casting anyone beyond their teen years or above a sample size, Piccioli first began enlisting larger models for his SS22 couture show. But while many brands mix in a few curve models every now and then, Piccioli seems to be sticking to his guns when it comes to more diverse casting – which makes even more sense when you consider couture is lapped up by private clients who perhaps don’t have the same proportions as a 15 year-old girl. For those of us who sadly don’t have Valentino couture cash (uber-wealthy sugar daddies, DM me), the inclusion of larger models like Jill Kortleve and a number of new faces, and older models like Mariacarla Boscono  was a powerful moment of validation. We might not be able to afford the clothes, but seeing IRL representation on the runway surely means so much to so many.

THE PETITES MAINS HAD A MOMENT

A creative director or designer would be nowhere without his team, so it was genuinely deeply moving to see Piccioli leading his atelier team, all beaming in their white coats, down the Spanish Steps. In fact, it’s been a bit of a theme this season, with the likes of Iris Van Herpen and Olivier Rousteing for Jean Paul Gaultier managing to coax them out of the atelier for their much (much!) deserved moment in the spotlight.

NOT TO BE DRAMATIC, BUT THE COLLECTION WAS JAW-DROPPING

Piccioli dubbed the show The Beginning, since the first ever Valentino store flung open its doors a stone’s throw from the Piazza di Spagna, with the resulting collection a trip through the house’s vast archives brought bang into 2022 through his unique talent and eye for detail. Demonstrating his innate mastery of colour, the designer turned the pale grey steps kaleidoscopic, as models carefully made their way down them – to an emotional live soundtrack by Labrinth – in great, sweeping gowns in shades of faded neon green and orange, hot fuchsia, and deep, rich purple, with many of them studded with crystals that glittered in fading dusk light, or trimmed with ostrich feathers that rippled in the breeze.

Particularly youthful and fresh were the slinky, semi-see-through sheath dresses, some of which were paired with cute short-shorts or sparkling curved car coats, and the voluminous, bustling skirts that were paired with simple white tees and contrasting sashes to the waist. And while there was menswear mixed in just like last season, the lines between gender and their wardrobes was blurred, as male-presenting models slipped into diaphanous chiffon gowns and bustier tops with dramatic trains matched with louche, loose-legged trousers.

THE AFTER PARTY WAS A VIBE

As dusk turned into night, guests headed for the Terme di Caracalla, where Piccioli got behind the decks to drop a bunch of 80s new wave and 90s bangers, like “Fade to Grey” by Visage, and Robin S’s “Show Me Love”. Formerly Rome’s second-biggest bath house, the ruined monument was filled with party smoke, as guests drank Negronis, danced, and, in the case of plenty of the models, even had a cheeky snog. Young love hey! Don’t you just love to see it.