From inflatable chairs to decal-dressed denim, the collection goes hard on a trip down memory lane 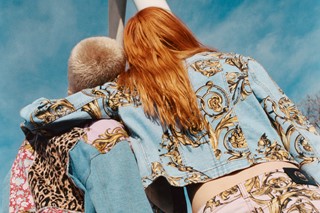 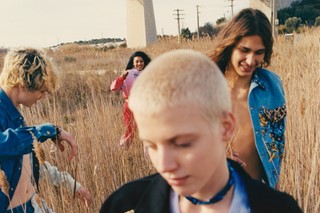 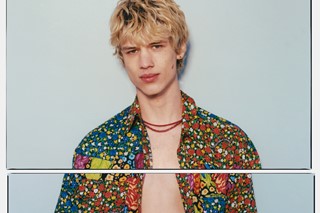 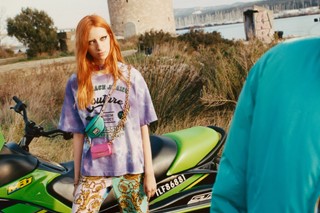 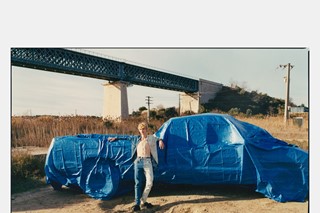 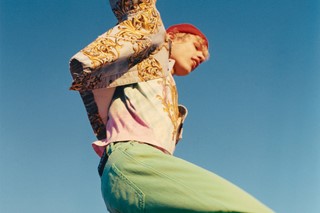 With the arrival of its SS22 campaign, Versace Jeans Couture makes a solid case for inflatable furniture’s big return. Shot by Osma Harvilahti, the pictures in question form just a small fraction of the full series, but provide a sweet dose of nostalgia that serves as an emotional backdrop to the entire campaign.

First appearing in 2018, the label was born out of Versus and Versace Jeans, and has been wowing ever since. This season, the collection was motivated by youthful experimentation and possibility, playing with coming of age narratives that manifest most prominently through the supporting campaign, which revises the classic trope for a contemporary audience.

For its womenswear this means silhouettes that side on the romantic and the sensual – think slip dresses with ruffled flounces and lingerie details – but with a modern twist in the form of plisse, that much sought-after fabric that twists and folds, and makes a number of cameos throughout the collection. The addition of chunky shoes throws off the scent, providing a playful tone to an otherwise sugar-coated apparel series of florals and pastels.

The men’s arm of SS22 is led heavily by Americana classics (note plenty of denim), with a sports-focused undertone present throughout. Here, relaxed fits and streetwear staples reign supreme, as block-coloured pieces are given graphic, branded accents and the distinctive Versace Jeans Couture allure plays a key role in the tropical florals juxtaposed with animalier.

Where their female counterpart goes high (read: platforms), the men’s footwear offering instead focuses on bulky sandals partnered with colourful socks. Seen through Harvilahti’s lens, the loud prints and iconic Baroque designs provide a unique starting point for the campaign, which threads the intensity, purity and uncontrolled emotion of young adulthood into its fierce energy.

Accompanying the static imagery is a short film from Paris-based director Vincent Catel. Teaming up with Versace Jeans Couture for a second time – last year he made the short Freedom Now, which married the AW21 collection, a love story and a race track – Catel introduces a new group, full of joy and optimism as they reclaim their suburban environment.

Borrowing visual notes from Larry Clark’s Kids and Andrea Arnold’s American Honey, in Catel’s world we meet Imán Kaumann Madelaire, headbanging in an aqua tiled bathroom, Lazar and Yuki van Gog painting their nails in the kitchen, and further bored-but-living-their-best-summer-lives vibes that generally look good on film. Brian Alar opens the short, reciting a poem of his own over Salem’s 2020 track "Starfall" as rusty cars that almost glow orange and lime coloured motorbikes become photo opps for the cast, enveloped again by that vibrant blue sky. “I like myself most in a rush,” says Alar, “but even the future comes anyway. How often do you get to live like this?"