Rihanna honours those with breast cancer, while Gucci unveils its next show venue 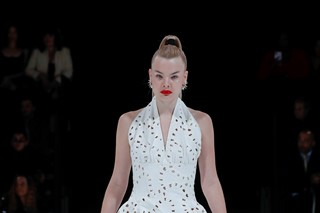 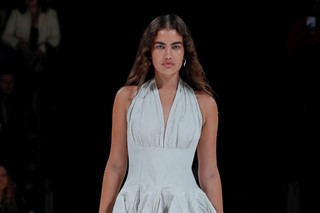 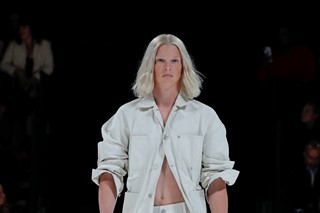 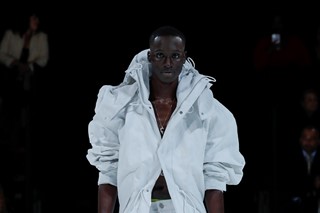 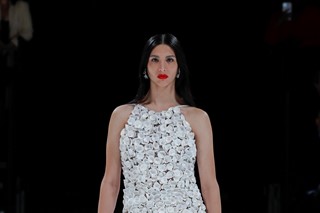 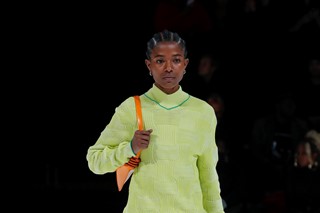 The last time Bottega Veneta sent out a collection, it was to a private audience in the bowels of Berghain, manned with such imperviousness, that Sven Marquardt, the nightclub’s ferocious bodyguard, sat front row. Yet this time around, the label livestreamed its show to tens of thousands of people, as it took over a colossal, derelict theatre in Detroit for Salon 03, hopping from techno playground to techno birthplace.

As we have come to expect from Daniel Lee’s tenure at Bottega Veneta, this collection was an experiment in salacious textures, turning out crunchy, metallic overshirts, shell-festooned slips, crocheted handbags, crisp, sequined shifts, swollen, faux-fur coats, and fuzzy beach towel dresses. While the show opened with a flounce of demure, Marilyn Monroe-indebted cocktail dresses, Lee soon dialled up the glam with lime, diamante-encrusted two pieces, delicately boned beneath the breast, and chest-baring regency shirts. The label’s trademark social media-friendly sexiness was tempered, though, making way for a sweep of technical, workwear-indebted looks, namely storm jackets, which had been pinched at the shoulders to statuesque effect or blown-up with blouson sleeves.

As Lourdes Leon took to the runway, Lil Kim, Kehlani, Slowthai, Burna Boy, and Mary J Blige watched on, wearing the brand’s many-tendriled monster coats. Bottega Veneta’s tentacles extended beyond the midwest, however, punching holes in London and Shanghai, too, where it has set up a temporary boutique and an immersive maze experience, respectively. Check out the livestream here for more of the show.

Elsewhere this week, Naomi Campbell and Kate Moss were enshrined as NFTs, just as Zendaya was officially heralded a fashion icon. PinkPantheress unmasked, scoring her first fashion gig with Marc Jacobs, while Kanye did the opposite, flitting around European airports in a coterie of latex Halloween masks. For everything else you might have missed, click through the gallery below.

LN-CC AND FILA ARE FLOCKING TOGETHER

Coming together over the lockdown of last year, Flock Together, the POC birdwatching collective, has migrated around the world, concerned not only with the well-being of nature, but its own members. LN-CC and Fila invited Flock Together to work on a collaborative capsule with 15 per cent of all sales going towards its community fund. The collection includes a redesign of Fila’s 1990 Trailblazer (spearheaded by Westminster grad Halina Edwards) alongside two fleece jackets. Head to LN-CC to see more.

This October, in support of Breast Cancer awareness month, Rihanna is spotlighting survivors and thrivers, with a campaign featuring three couples who have faced, or are currently facing, the illness. Following last year’s initiative, where the brand agreed to donate up to $250,000 to Rihanna’s Clara Lionel Foundation, Savage X Fenty have released a limited edition, BCA capsule collection. Head over to the Savage website to check it out.

IS THE METAVERSE INCLUSIVE? IoDF HAS THE ANSWERS

Beyond all its VR worldscapes and wild forays into crypto-couture, the Institute of Digital Fashion has been badgering away behind the scenes, compiling extensive research on the metaverse’s relationship with diversity and inclusion. Though it has the potential to break away from earthly hierarchies and social frameworks, as it stands, the virtual world is not much better than our own. Forged in collaboration with the Circular Fashion Summit, My Self, My Avatar, My Identity has also informed a series of avatars and an upcoming capsule collection set to launch in December. Read the institute’s findings here.

Burberry’s latest campaign sees four models fly – note, not run – through fields of wheat, tumbling through the British countryside in the label’s trademark, earthy outerwear, until they find themselves suspended above the channel, far beyond the White Cliffs of Dover. It’s the second time Riccardo Tisci has worked with Megaforce, a collective of French filmmakers, who were responsible for the brand’s Brick Lane Christmas campaign last year. Watch the stomach-soaring Open Spaces film here.

ONE TANGO ICE BLAST AND A MIXED POPCORN, THANKS GUCCI

Having eschewed the established fashion calendar for a number of seasons now, Gucci has revealed the venue for its upcoming off-schedule collection in Los Angeles: the TCL Chinese Theatre on Hollywood Boulevard. And, as part of the deal, the label has earmarked $1 million to the city’s homelessness and mental health services. Gucci Love Parade, as the show has been titled, will take place on November 2, so check back then to get our lowdown.

Ciesay and Soulz of Places+Faces are launching a collaboration with Xbox, platforming the new Xbox Game Pass Ultimate – a controller which you can plug into your phone and play over 100 games via the cloud. “We’ve been fans of Xbox since we owned our first Xbox back in 2002,” Ciesay says. We wanted to create something special and exclusively designed around the controller. We wanted to create something that inspires both of our communities; a true collaboration between our brands”. The capsule collection goes live today (October 22) and comprises hoodies, t-shirts, and bags. Catch the collection online here.

For its 45th anniversary, MCM has tapped five emerging artists to create one-off pieces based on the label’s cognac Visetos-Stark backpack. The work of Joe Sweeney, Denzel, Ted Le Swer, Imogen Frost, and Jess Cochrane will be showcased in MCM’s flagship store and will be auctioned for charity – the proceeds of which will benefit UAL arts and fashion scholarships.

Celebrating the 25th James Bond film, Michael Kors has released an 11-piece capsule collection, which evokes all the high stakes exoticism of the blockbuster franchise. Handbags, luggage, swimwear, and footwear have been emblazoned with a new, black and gold motif, with 007 branding stamped across luggage tags, t-shirts, and swimsuits. Fittingly, the accompanying campaign sees Cindy Bruna and Bella Hadid transformed into poolside lounging Bond girls. “I think it really exemplifies the glamour and adventure synonymous with both Michael Kors and James Bond,” said Michael Kors. The MK X 007 capsule is now shoppable in store and online.

This week, Timberland celebrated the launch of its Earthkeepers by Raeburn collection with an intimate, and fully immersive, VR experience at creative director Christopher Raeburn’s East London studio. The designer schooled guests on all the eco-innovations housed in the collection, which is made up of gender fluid activewear and accessories, focusing on wardrobe essentials. “Travelling light and taking only what you need”. See more of that here.