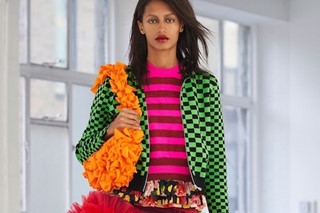 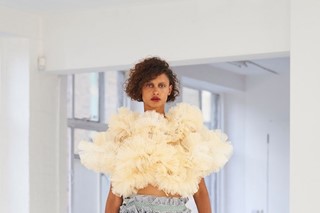 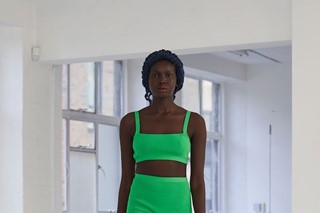 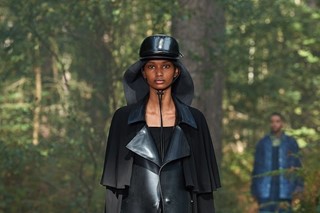 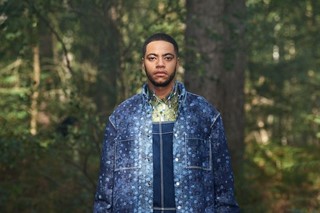 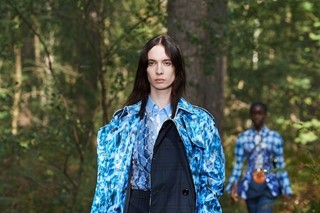 Where June’s first ever digital London Fashion Week was a stripped-back affair, this season, for SS21, the UK capital got into its stride. With a schedule packed full of IRL and URL events, and some of the city’s biggest players back on the line-up, the event played host to film launches, physical shows, and plenty more, as designers emerged from lockdown and let their creative juices run free (and just in the nick of time, tbh, since all signs point to the country heading back into hiding any day now).

From Burberry heading to the woods to showcase its latest collection and Molly Goddard “just wanting to make people happy” with her latest frou-frou tulle creations, to Maximilian Davis’s standout debut as the newest member of the Fashion East fam and Eden Loweth’s first solo outing at the helm of Art School, we’ve rounded up everything you need to see from LFW’s SS21 season (which thankfully made no mention of things being ‘phygital’, because let’s let that die okay?).

Going it alone after longtime partner in design Tom Barrett graduated Art School earlier this month, Eden Loweth presented his first solo collection for the label in a West London park, where members of his community strode through the space’s flowerbeds in front of a tiny, strictly socially-distanced audience of editors. Recounting how difficult he found living through the coronavirus lockdown, the line was named Therapy and offered “a message of hope”, with a wildly diverse cast of LGBTQ+, non-binary, differently abled models further pushing the label’s utopic vision of a more inclusive fashion future. When it came to the clothes, Loweth amped up the tailoring for SS21, with distressed trench coats, exaggerated, boxy blazers, and high-waisted, wide-legged trousers seen alongside tiny leather minis, asymmetric satin gowns, and faux fur gorilla-esque coats. 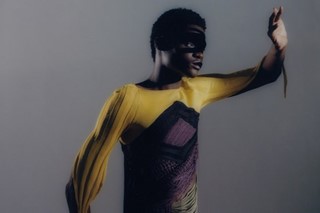 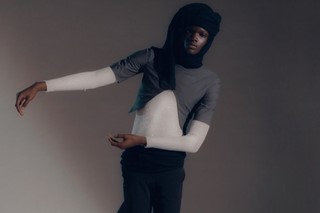 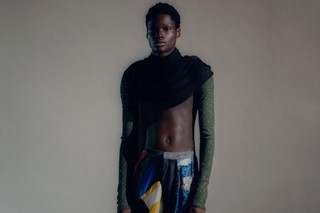 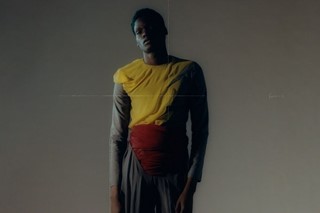 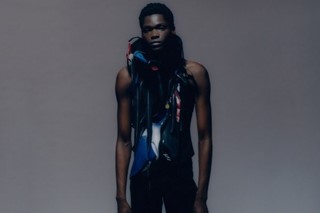 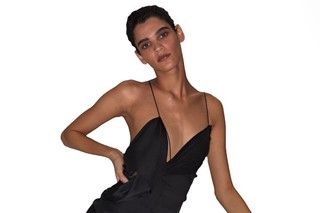 Celebrating its 20th birthday this season (truly, how?!). Lulu Kennedy’s ever-brilliant talent incubator gained a new family member in the form of Mancunian designer Maximilian Davis, who joins Goom Heo, Saul Nash, and Nensi Dojaka for SS21. Creating his inaugural collection, Jovert, against the backdrop of the Black Lives Matter protests, Davis delved into his Trinidadian heritage, looking to his late grandmother, who came to the UK to become a nurse, and the country’s riotous, reclaimed Carnival for inspiration. What did this translate to? Halter-neck tops with peekaboo cut-outs that offered a sexy glimpse of collarbone and shoulder blade, miniskirts trimmed with goose feathers, and slinky, floor-skimming dresses slit to the upper echelons of the thigh, all of which were modelled on the 19th century frock coats, waistcoats, and gowns worn to celebrate the occasion.

Goom Heo, meanwhile, got voyeuristic when it came to her collection, having spent much of her time in isolation considering exactly what her neighbours were getting up to (and actually nosing out of the window and into their homes from time to time). The Korean designer once again went beyond the boundaries of gender to put her man in tight, layered tanks with voluminous chiffon collars, and skewed, flowing tops, as well as swirling, extravagant flared trousers and tiny skirts, with many looks replete with Mary-Janes and signature uber-square-toed heels. The finishing touches come in the form of embellished iterations of Heo’s own eyes with dramatic and kinda funny fringed eyelashes. Big Brother might be watching you, but so is GOOM.

Fresh off the back of a high profile endorsement c/o Bella Hadid, who picked out one of her designs to ‘attend’ last month’s VMAs, Nensi Dojaka dropped her second Fashion East collection via a short film shot by Harley Weir, with styling by Fran Burns. Expanding on her AW20 debut, the Central Saint Martins grad’s new season offering was made up of more of the same delicately engineered chiffon, silk, and satin layers that made her last so fucking good: with engineered, structural bra tops unfathomably held together with the most understated of strings, sheer mini dresses and oversized shirts layered over form-fitting, immaculately tailored trousers, and plenty of those sexy, subversive lace-up stockings on the line-up (there was also swimwear). Best of all, the palette, as per last season, was made up almost entirely of blacks and greys: be still our beating goth hearts.

After weeks (and weeks, and weeks) of lockdown in London, the first thing Saul Nash did when restrictions began to lift was make a mad dash for the coast for a dose of fresh sea air. Inspired by the sense of freedom it gave him, the Dazed 100-er eventually hauled a bunch of dancers back to the spot with him, where they created a short film featuring a new, choreographer performance that once again demonstrated exactly how his dynamic sportswear, which this season forms part of a collection called Flipside, moves. Shot against the backdrop of a pale blue cloud-punctuated sky and shimmering green sea with a palette that evokes the softness of spring, the offering is made up of transformational, voluminous pieces including shapeshifting jackets that can be ripped apart to become a cape, classic sweatshirts that hide concealed panels in their seams, and billowing track tops trimmed with faded neon drawcords, with Nash citing whirling Sufi dancers and dancer Loie Fuller as influences.

Following on from the short film and collection she debuted back in June as part of the first co-ed digital LFW event, Greek designer and 2020 Dazed 100-er Dimitra Petsa (OTWKA Di Petsa) dropped part two of her Self Birth offering. Named I Am My Own Mother, a candid set of stripped-back images show off Petsa’s signature wet-look, semi-see-through tops and dresses, most of which are embroidered with her signature H2O-focused script – our fave being the one reading ‘Cries in Public’ because absolutely huge mood.

Inviting a select group of editors into her sun-drenched Bethnal Green studio, Molly Goddard just wanted to make something that made people happy this season, and tbh, we think she achieved it. Sticking to her tried and tested formula of frou-frou ruffled smock dresses and brilliantly bath pouffe-esque tops paired with strappy slip dresses, bold stripe-y sweaters, and actually pretty 00s emo chequerboard hoodies and cut-off vests, looks were finished off with genius stacked shoes in primary and secondary crayon-bright hues. Designed in collaboration with UGG, all signs point to a renaissance for the Y2K it-girl fave, given last week’s news detailing Telfar Clemens’ partnership with the brand. Crocs, who?

Simone Rocha’s latest collection demonstrated the kind of opulence we’ll be striving to achieve as soon as we get out of Lockdown: The Sequel and cast aside the sweatpants for good (or at least until we’re hungover and CBA getting dressed). Drawing inspiration from controversial artist Richard Prince’s erotic series Bettie Kline, along with images of Charles II’s mistress Nell Gwyn, the offering was made up of dramatic silk bodices paired with full, wide skirts, floor-sweeping duchess satin gowns layered over gathered cotton calico shirts, and her to-die-for brocade princess coats, most of which were scattered with pearls, beads, and other embellishments that have become synonymous with Rocha’s name.

London’s biggest player kicked off this v different London Fashion Week on Thursday with a live, unattended show that saw models make their way round a secluded forest as subversive artist Anne Imhof performed. Cutting down his typically enormous collection by half this season, Riccardo Tisci looked to the sea for inspo. Conjuring up a secret love affair between a mermaid and a shark before letting loose in his sketchbook (yes, really), the designer debuted an offering filled with layered dresses bearing water-y prints, shark-embellished trench coats, and hazard orange cagoules and waders, as well as a selection of his signature sou'wester-esque bonnets.

Dusting off his paint palette for the first time in 15 years, Christopher Kane began creating portraits of his female family members during lockdown (paint us like one of your Kane girls, Christopher!) Calling them, affectionately, his ‘Brats’ the Scottish-born, London-based designer then transferred them onto his v cute, highly personal, and scaled-back SS21 collection, made up of oversized shirts, sequin-splattered minis, crisp overcoats, and boxy sheath dresses – with each lewk showcased next to the painting that inspired it. J’adore.

Dazed 100 alum Charlotte Knowles dropped her SS21 collection Petals by way of a short film created in collaboration with Harley Weir. Inspired by the flower power vibes that ran rife in the 60s, as well as vintage craft techniques, Knowles and partner Alexandre Arsenault doubled down on its creation without help from pattern cutters or seamstresses. Expect to see the offering’s sweet-sexy see-through, floral tops, gathered trousers, and leather layers on Bella, Dua, and Kendall in three… two… one...

Taking over East London’s curio-filled Hornecker Centre for SS21, Per Götesson paid tribute to his grandmother Lillie with his latest collection after she passed away earlier this year. Teaching him about craft and instilling her own hard-working ethic within him, the designer explained the deeply personal offering celebrated her lifelong commitment to beauty: “My grandma was a garment factory worker who had a specific appreciation of what’s beautiful. The way she lived her life, how she appreciated craft, her taste, and how she combined things has all informed this collection,” he explained. This translated to denim coat dresses, capped-sleeve cardigans, and lace bodices, as he reimagined womenswear for the man’s body and continued in his obliteration of gender boundaries. Finishing everything off was Husam El Odeh’s subversive costume jewellery, including a stand-out chandelier crown inspired by Lillie’s own home decor.

Between her turn as a giant canary when she protested Julian Assange’s extradition in a huge birdcage outside London’s Old Bailey and her weekly addresses on IG, Vivienne Westwood somehow managed to conjure up a full-scale collection and debut it via a short film featuring a diverse bunch of models. With the line featuring motifs created by legendary musician Chrissie Hynde and artist Anthony Newton, VW encouraged people to free themselves from established dress codes (“Wear your evening clothes to the office if you go back to work!”) and revealed from now on, the label would be sticking to just one offering a year.

Making no attempt to rest on her creative laurels after dropping a poignant zine as part of June’s ‘menswear’ season, Bianca Saunders was back on the LFW schedule for SS21, baby. Debuting a new collection by way of a short film this time around, the rising London designer drew inspo from 1993’s House of Montana Vogue Ball and Dutch artist Hans Eikkelboom’s “The Ideal Man” experiment, in which he asked women to detail their perfect guy and then dressed up and aligned his personality and demeanour with what they described. Naturally, Saunders’ ideal man dresses head-to-toe in her slick, understated tailoring, and tbh... yeah, same.

Turning to Susan Sontag’s historical romantic novel The Volcano Lover for inspo this season, Erdem Moralioglu debuted his latest collection by way of an unattended runway show, captured away from his usual National Portrait Gallery venue in the thick of Epping Forest. Enlisting frequent collaborator Ib Kamara to work his magic when it came to the styling, the offering was made up of dramatic, richly embellished empire-line dresses, puff-shouldered smocks, clashing floral skirts and shirts, and louche knitted cardigans and sweaters that slipped from the models’ shoulders as they walked. With Sontag’s book centred around a love story unfolding against Naples’ bubbling Mount Vesuvius, the designer likened its themes to what we’re facing right now, in 2020: “It is a precipice moment in time – everyone understands that the future will be different from the past,” he revealed in his show notes.