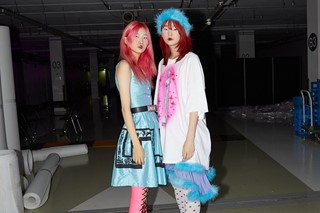 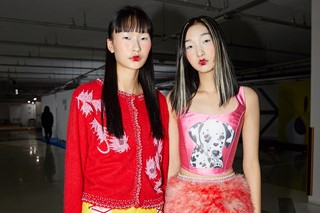 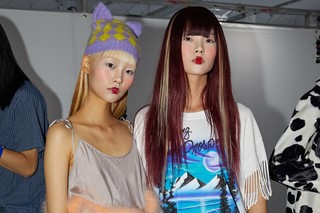 Earlier this month, London-based designer Ashley Williams landed in Seoul to debut her SS20 collection at the city’s biannual fashion week. Taking place just a few weeks after the rest of fashion month winds down in Paris, the Korean event is quickly becoming known for showcasing some of the hottest young design talent.

As part of a collaboration with the British Fashion Council, each season, a UK designer is invited to showcase alongside local talent – last year, menswear duo Cottweiler presented an extension of their AW19 collection. This time around, it was the turn of Williams – who’s known for her playful, tongue-in-cheek take on streetwear – to put on a show with her SS20 collection.

Worn by a cast of local models, the collection explored ideas of good and bad taste, with coquettish, Y2K-esque looks made up of corsets and fur trims mixed with dalmatian prints, patterned tights, skulls, and her signature scattering of diamantés. The show was soundtracked by the Sinead O'Connor classic, “Nothing Compares 2 U”, which Williams liked, she told AnOther, for being “poppy and fun, but also a bit emo”.

Elsewhere during the week, highlights included MUNN (who showed at London Fashion Week Men’s in June 2019 as Cottweiler’s London counterpart in the BFC exchange), Maxxij, KYE, and Seoul Fashion Week-newcomer LLEE, as well as a sustainability-focused off-site presentation, Re:Code.

It’s well-known that Williams knows how to throw a party, and her stint in Seoul was no different. Post-show, attendees headed out for a night of karaoke – so with that in mind, here the designer shares her go-to songs, from heartfelt duets and classic showtunes to a feel-good Paris Hilton classic.

CELINE DION – “IT’S ALL COMING BACK TO ME NOW”

“It’s quite a long song which can be challenging, but it's very rewarding if you commit to it.”

“It’s easy to sing so you don’t have to yell and it’s nice to sing duet style with friends.”

LES MISERABLES – “I DREAMED A DREAM”

“It’s a show tune and very emo – it's unexpected but people love it.”

“It’s an iconic song with a stunning guitar solo.”