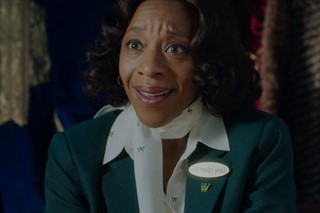 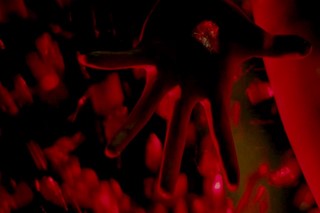 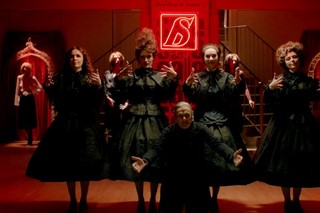 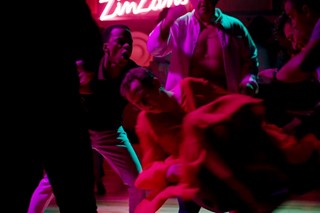 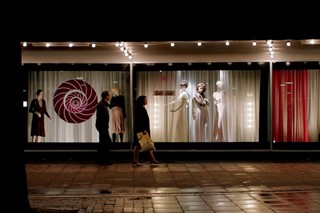 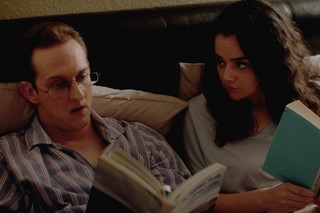 Whether it’s the horror movie malice of Berberian Sound Studio or The Duke of Burgundy’s Fassbinder-esque jealousy and desire, Peter Strickland’s films use the darker depths of human emotion as cinematic canvas. In the British director’s latest effort, In Fabric, this cruelty is projected onto a deceptively innocuous red dress. Like a thoroughly wicked version of the jeans from the Sisterhood of the Travelling Pants, the garment miraculously fits and flatters anyone who wears it – but wreaks havoc on their lives shortly after.

Whilst its sartorial plot device bears some similarities to this cookie-cutter teen movie, it’s stylistic antecedents can be found in Italian Giallo. In much the same way that horror flicks from the likes of Dario Argento do, In Fabric combines a sensual atmosphere with unexpected flashes of intense gore. Aside from Giallo, Strickland details his other aesthetic referents as ranging from old shopping catalogues and Serbian performance artist Katalin Ladik, to ASMR videos on YouTube.

“We spent a lot of time discussing the style of the dress and what era it should be from. In the end the classic wraparound shape, cinched at the waist, that was found in the 50s and 70s seemed to be right” – Jo Thompson

The carnival-esque department store where the unsuspecting Sheila (Marianne Jean-Baptiste) first encounters the demonic dress, meanwhile, has a more singular inspiration: Jacksons of Reading, a historic department store which closed in 2013. With its mishmash of Edwardian architecture and 70s interiors, Strickland describes the Jacksons shopping experience as being akin to “stepping back in a time capsule” – a sensation that is reflected in the film’s collage of different time periods.

Naturally for a film that places so much power in an item of clothing, one of In Fabric’s focal points is its costume design. Whether it’s the frilly embellishments of the shop girls’ Victorian frocks or the supple, silky folds of the murderous red dress, each wardrobe choice has been meticulously planned right down to the last, minute detail.

Ahead of its UK launch on June 28, here we speak to In Fabric’s costume designer Jo Thompson, whose previous work includes cult classic This Is England and Channel 4’s Glue, about Giallo, the psychology of shopping, and making a horror villain out of an inanimate red dress.

What were the inspirations that fed into your work on In Fabric?

Jo Thompson: Peter (Strickland) gave me a very comprehensive list of films to watch and music to listen to. I spent ages absorbing myself into his world and I loved it, particularly films like Carnival Of Souls, all the Giallo films and Anna Biller’s film The Love Witch. In terms of fashion, I referenced Halston, Ralph Lauren, Jacques Fath, and Calvin Klein. Like Peter, I’d also been to Jacksons as a child – it was full of old glass cabinets and you felt like you’d suddenly stepped back in time. There was a formality about the way people addressed you. Everyone seemed quite odd, especially for me being a child, and obviously for Peter too.

Peter Strickland’s work is often likened to the Giallo horror genre – what would you say has been the lasting impact of the genre on fashion? Did Giallo influence your choices at all?

Jo Thompson: I think the drama of Giallo films was a huge influence, as well as the fact that everything is symbolic and heightened. There’s also a sensuality about the clothes (in Giallo) that’s dramatic and alluring.

What was your process like for working on the film?

Jo Thompson: I spent hours collecting photographs and paintings that felt right for the tone of the film. I also sourced magazines like Vogue, Nova, and Elle and Littlewoods and Freemans shopping catalogues from the 70s and 90s, as well as paper dress patterns from the same periods.

My team and I then trawled through costume houses for relevant and inspiring pieces from different eras that felt right for the film. We built up a stock of underwear, utility wear, hats, coats, and gloves that we constantly referenced, and the whole process was actually quite organic. The red dress was a mixture of my design and a lot of draping sessions on a mannequin to get the right shape and proportions. The dress and its duplicates, as well as Gwendoline Christie’s lingerie, were couture, as made by Kasia Chojnowska.

The cinematography in the film picks up every tiny detail in each shot, paying particular attention to the texture of fabric. Did this impact on your decisions when working on the film?

Jo Thompson: I knew Peter wanted a very visceral, textural feel to the film, so everything was very considered. With the dress we tested lots fabrics and different colour reds that would enhance the sumptuousness of the dress and it’s softness, which belied its ultimate menace. The font and design of the embroidery on the dress were painstakingly worked on within my department and that of the graphic designer Flo Hickson, it had to look wound-like and arterial.

How did you settle on the particular form the red dress takes?

Jo Thompson: We spent a lot of time discussing the style of the dress and what era it should be from. In the end the classic wraparound shape, cinched at the waist, that was found in the 50s and 70s seemed to be right. It also had to be flattering on different sizes and body shapes and genders. We used a beautiful natural sheer silk which was very luxe and wafted and waned as it was dropped. It had to be light so it caught the air to add mystery and had something ghostly about it. Initially Peter visualised the dress as white so that when the victims died the embroidery (which functions symbolically like a wound) would bleed.

Why did it eventually become red, then?

Jo Thompson:  I felt it needed to be something much stronger and red seemed the natural choice, it created a sense of drama and was always visible to the audience – wherever it was hiding. I usually avoid red as it can be a very unstable colour on camera, so for me it was quite exciting and unknown. There had to be something sexual and alluring about the dress; it had to be very seductive and feminine. Of course, red is symbolically a signpost for danger. I felt the dress had to be a strong, recognisable character in its own right – we even gave it a cast number!

“There had to be something sexual and alluring about the dress; it had to be very seductive and feminine. Of course, red is symbolically a signpost for danger. I felt the dress had to be a strong, recognisable character in its own right – we even gave it a cast number!” – Jo Thompson

There’s also a mix of different time periods in the costumes. Sheila and the characters in her direct vicinity wear very contemporary clothes but the department store workers are wearing Victorian-style outfits, and some of the extras seem to be wearing kind of retro clothes. Could you talk more about this?

Jo Thompson: I wanted the costumes to have a dream-like quality, where they embodied different periods, so it was more about silhouette and colour rather realism. My ambition was to evoke a timeless and ambiguous quality with the costumes, so that nothing fits into a specific period. It was a mish-mash of Victorian and 1930s-1990s fashion, as though the demonic dress had affected many people through the ages for a long, long time. I worked very closely with Emma Scott, the make-up designer, on all of the characters’ looks. This was hugely satisfying as we just went along with what felt right for each scene – we weren’t locked in by an era.

The costumes for the end scene were reminiscent of 1930s factory workers as a visual comment on the constant mass production that goes into the making of beautiful clothes, which is so far removed from the people who actually make the garments. (You could say) these people are literally having the blood sucked out of them, whilst being trapped in inescapable situations.

Something about the film that is quite interesting is how it explores the emotional impact of clothing and retail – the elation and escapism of a new purchase, and then the very visceral ‘comedown’ you sometimes have when you take it home and it doesn’t look as good as you hoped.

Jo Thompson: Yes, that’s a very literal translation about shopping that I think Peter was trying to convey. (Lead character) Sheila pins all her hopes on a new dress, hoping it will secure the love she is so clearly looking for, which she thinks will change her dreary life for the better. It then seems all the more tragic as the audience knows that the dress will be her undoing.

The film seems to have quite an anti-consumerist message but it really taps into fashion as a vehicle that permits a lot of fantasy – even if in this context it’s channelled into horror.  How did you reflect this in the costume?

Jo Thompson: The original script was called In Fabric – A Ghost Story, so I was trying to create a very fluid, dream-like environment with a neutral canvas for all the weirdness, so that the dress would stand out. I was very interested in silhouettes as that’s how we sometimes remember things in dreams and I wanted to create a timelessness; something that would linger in the memory. The shop assistants came from discussions with Peter wanting something otherworldly and I felt something gothic and extraordinary would make the audience believe them to be witches or ghosts, something indefinable. We gave them earrings made out of hair and chatelaines so that there was something quite disturbing about them visually.

In Fabric is released in the UK on June 28.