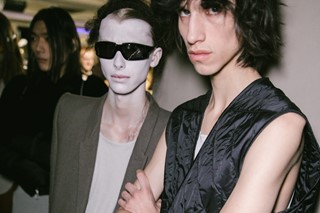 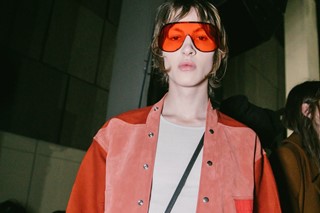 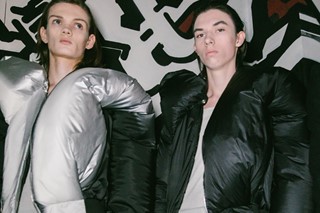 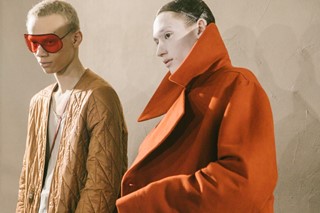 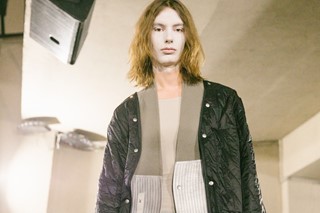 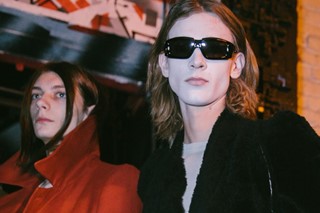 Rick Owens has always been an outsider. Since his inauguration as the high priest of avant-garde fashion back in the early 90s, the designer has stuck a firm two fingers up at the notion of trends, and surrounded himself with a like-minded band of non-conformists – from the likes of Tommy Cash and Christeene, to Fecal Matter and Gareth Pugh. Having seen The Rocky Horror Picture Show as a teenager, in 2016 Owens explained to Dazed he’d “physically ached to be part of that group of cheerfully degenerate weirdos,” and seemingly did everything within his power to make that happen.

When it came to his AW19 show, Owens took the opportunity to spotlight another, slightly lesser-known outsider: Larry Legaspi. If you’re unfamiliar with the name, it’s not surprising. Despite the fact the New York-based designer pioneered the space-y, sleazy, glam-rock look of the 1970s, and dressed the likes of Kiss, Divine, Grace Jones, and trailblazing girl-group Labelle, Google searches for ‘Legaspi’ came up with little more than nothing. A Wikipedia page? Until late last week, there was no sign of one of those either.

Owens, a long-time fan of his work who’s been citing him as an influence for almost two decades, is set to rectify this come October, though – given he just announced he’s been working on a new book dedicated to Legaspi’s life, work, and legacy. “He introduced a camp ferocity to the mainstream and helped set a lot of kids like me free, with his art deco sexual ambiguity and raw, black leather bombast,” he explained after his Paris show. Of course, he couldn’t do it alone: which, since Larry himself passed away in 2001, is where his widow Val Legaspi comes in.

“Larry was such an amazing man and had an incredible amount of talent, but he was always overlooked in favour of designers like Thierry Mugler and what was going on on the Paris runway” – Val Legaspi

“I got a phone call from Rick, who I didn’t really know that much about,” she explains. “He told me he’d always been inspired by Larry and that he’d been thinking of writing a book about him, and he asked me if I’d be happy for him to do so. Immediately, I said yes! Larry was such an amazing man and had an incredible amount of talent, but he was always overlooked in favour of designers like Thierry Mugler and what was going on on the Paris runway – so of course I wanted him to finally get the recognition he’s always deserved. Next thing I knew, Rick and Michele (Lamy) had arranged to come to New York, and Rick was elbow deep in a box of press cuttings and sketches in my closet!”

Having “fallen immediately in love” with Rick and Michele, following the meeting, Val teamed up with friends Sandra and Theresa to properly archive all of the materials she’s kept in boxes for the past two decades. “I don’t have a computer, so Sandra and Theresa are taking care of the scanning and the Instagram account and all of that,” she says. “There’s so much to get through.”

As his story comes together in the hands of Val and “her girls” (as she affectionately refers to them) and we await the release of Owens’ book later this year, here we take a look at the extraordinary – and largely unknown – designer’s life.

HE OPENED HIS FIRST BOUTIQUE, MOONSTONE, WHEN HE WAS 20

Larry Legaspi was born in 1950 in New Jersey, but made the move to New York City “as fast as he could, straight out of school,” explains Val. “He was a shy introverted kid, who was bullied throughout his childhood, so making a break for the city was something he wanted to do for a long time growing up.” Having enrolled at FIT and bought his first sewing machine from the Salvation Army, Legaspi sold his first clothing collection – Mother Superior Clothing – at legendary Soho boutique Abracadabra in 1971, before opening his own store the following year. Situated in the West Village, Moonstone was founded alongside jeweller Richard Erker and graphic designer Rob Cornucio, and mainly dealt with private clients. “At that time, Larry’s designs were so far-out they drew a fairly specific crowd that knew exactly what they were looking for.”

HE DRESSED SOME OF THE MOST RADICAL OUTSIDERS OF THE ERA

“Larry was great friends with Divine, John Waters, and that whole Baltimore set,” explains Val. “Divine would always be at the Legaspi salon which opened off Madison Avenue in 1977. He owned an apartment just around the corner – a penthouse in fact – and Larry and I ended up living in it while he was away, which was pretty lucky because renting a studio on Madison was so expensive, and Larry was totally independent.”

As well as dressing Divine, Legaspi also created the iconic looks worn by Kiss – with their gender-blurring, avant-garde catsuits and cut-out quilted leather looks coming to define the glam rock super-group’s aesthetic. George Clinton of Funkadelic, Grace Jones, and Pat Cleveland would often come to Larry when they needed something particularly showstopping, too – but it was Legaspi’s costumes for pioneering girl group Labelle that are perhaps the most significant among his vast archive. “Patti (Labelle) told me she didn’t think, as a group of soul singers, that they would have been invited to play the Metropolitan Opera House had they not worked with Larry,” says Val.

“Larry was great friends with Divine, John Waters, and that whole Baltimore set. Divine would always be at the studio having wild costumes made, and then later at the Legaspi salon which opened off Madison Avenue in 1977” – Val Legaspi

Legaspi and Val met when she was working in PR in 1977: “We got on like a house on fire, and eventually I began working with him,” she remembers. “We’d go out to dinner, to these big parties, and then we’d come back and work late into the night or the early hours of the morning – that was our life together.” The pair’s first public outing came in 1979, when they attended the Met Ball, with Val wearing a dramatic red fishtail gown, as designed by Legaspi. “It was a totally crazy night. Larry usually dressed these tall, long-legged supermodels like Grace and Pat, and here I was, this platinum-haired, five-foot-something, full-figured woman in this beautiful gown he’d made for me.”

Val also remembers a particularly avant-garde gown – the Queen of the Night dress – she wore to an opera performance in aid of peace in the Middle East at the New York State Theatre in 1980. “It was enormous,” laughs Val. “It was this huge black dress that had a 40-pound battery pack I had to carry underneath it to power its lights and all these mechanical bats that were all over it. We called it the Bat Gown, unofficially. Larry was always so ahead of his time, always finding inspiration in nature, and sci-fi, and old movies. His knowledge was unbelievable.”

HE WAS A PIONEER OF INNOVATIVE DESIGN METHODS

Though he was enrolled at FIT for a few semesters, for the most part Legaspi was self-taught and naturally highly skilled. When making the costumes the likes of Kiss and Labelle wore, the designer employed a unique method called ‘trapunto’, which saw him painstakingly pull individual lengths of cord through fabric. Resulting in a quilted effect, this meant the sculptural elements of the looks – the shoulder pads and collars for example – stood up entirely on their own without support. But Legaspi wasn’t just about over-the-top futurism and space age fantasies: his boutique also stocked a line of basics, including satin suits, simple sweaters, and single-seamed leather pants, as well as draped spandex and jersey dresses. “It wasn’t just about the drama for Larry,” explains Val. “He also wanted to create simple, beautiful pieces for women who weren’t of supermodel proportions.”

“Larry and I got on like a house on fire, and eventually I began working with him. We’d go out to dinner, to these big parties, and then we’d come back and work late into the night or the early hours of the morning – that was our life together” – Val Legaspi

THE LEGASPIS HAD AN UNCONVENTIONAL RELATIONSHIP

Legaspi had been openly gay throughout his life when he and Val embarked on a romantic relationship in the late 70s. “It actually blew me away when I first met Rick, because there are so many parallels between his life with Michele and my life with Larry,” she recalls. “Larry was gay, and, of course, Rick is openly bisexual, but there were a lot of other crossovers, too. They never met despite being in LA at the same time, for example, but they knew a lot of the same people. Bill Cunningham was one of our dear friends, and it was around the time Bill passed that Rick first got in touch with me – I had no idea they knew each other until I saw an Instagram post of the two of them together. It kind of felt like some weird, cosmic moment, like Bill had overseen Rick finding me or something.”

Both Cunningham and fellow photographer Roxanne Lowit were constants in the Legaspi’s lives, documenting their 1982 wedding for Details magazine with an article entitled Wedding Belle. Legaspi oversaw the spectacular ceremony, creating looks not just for himself and his bride, but also a huge number of the attendees, too.

In 1984, the Legaspis left the city and moved out to Glen Cove in New York State – into a house Larry himself found after he acquired his real estate license. The couple embraced a quieter life away from the chaos of Manhattan, visiting Val’s parents on the weekends and taking walks. In the years following, Larry and Val separated, with Larry moving to Arizona briefly, before spending most of the 90s in Palm Springs and Los Angeles. In April 2001, not long after he relocated to North Carolina, Larry died aged 51, as the result of complications relating to AIDS.

Though his name is unknown to many, and his vast body of work is only just starting to be archived, documented, and chronicled properly – by Val, her friends, and Rick Owens himself – it seems the revolutionary designer is finally about to get the recognition he deserves. “It’s amazing that a new generation are going to be inspired by Larry’s designs, and that’s largely down to Rick,” says Val. “I know he would be absolutely thrilled that his work is finally out there for the whole world to see.”