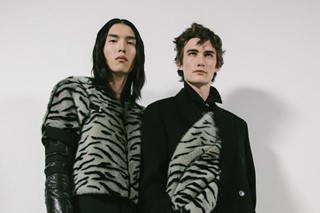 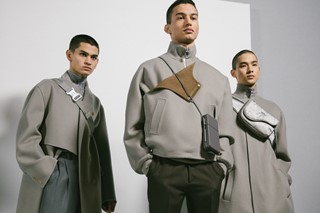 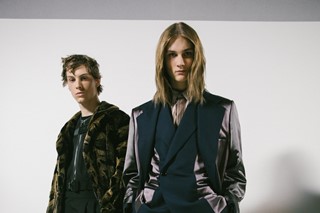 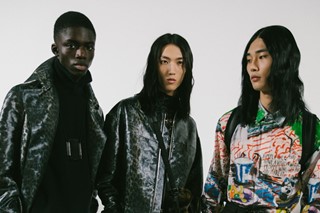 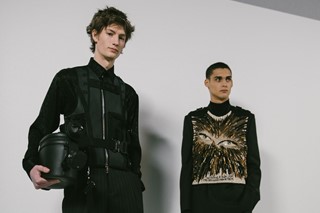 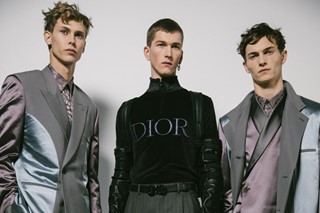 Although his last show was only a mere matter of weeks ago (when he flew guests out to Tokyo to witness a futuristic, robotic extravaganza), Kim Jones has been hard at work putting together his AW19 collection in time for his second outing as artistic director of Dior Homme. What went down? Here’s everything you need to know.

OBVIOUSLY THE FROW WAS PRETTY MAJOR

Making up the ranks tonight were the likes of Robert Pattinson, Kid Cudi, and a newly blonde Jonah Hill, as well as Jones’s long-time friends and cheerleaders David Beckham and Kate Moss.

THERE WAS A RAYMOND PETTIBON COLLAB

Yes, that Raymond Pettibon, known for his confrontational ink drawings and art for hardcore and post punk bands including Black Flag and Sonic Youth. The opening look featured a piece created in collaboration the artist: a couture level sweater embroidered with a pair of eyes. As well as featuring a series of existing artworks, the show also debuted some specially created pieces

THE MODELS MOVED DOWN A TRAVELATOR

Rather than walk down the runway, models stepped onto a motorised catwalk that carried them along as they struck poses. Because walking is so last season.

THE COLLECTION WAS ALL ABOUT REFINED FUTURISM

As with the last two seasons, Jones’s latest Dior show had a distinctly futuristic feel. On the line-up tonight was more refined, pared-back tailoring, with just a touch of the streetwear sensibility the designer is renowned for. Slim suits that tapped into the house’s existing codes were updated with the addition of nylon and satin panelling and Japanese-style drapery, while parachute-style cargo pants with chunky buckle hardware were paired with classic, wide-shouldered trenches. Elsewhere, shirts and bomber jackets emblazoned with Pettibon’s artwork were overlaid with the harnesses that are fast becoming Dior’s new signatures.

Accessories included Dior Airpod holders, leather phone cases designed to carry not one, but two phones, and some pretty serious-looking articulated wrist and elbow-length gloves, as well as more Saddle bags for the boys. This time around they were presented in high-tech nylon, worn cross body or slung over the shoulder, with buckles designed by Alyx’s Matthew Williams, alongside vanity-style cases with leather dogs attached to them, quilted satin backpacks, and leather duffles.