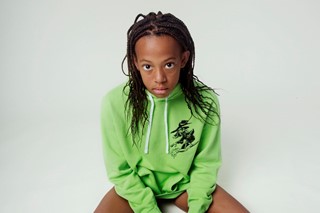 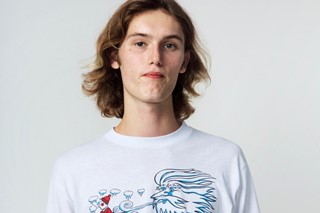 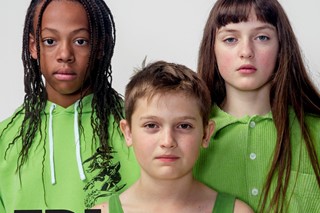 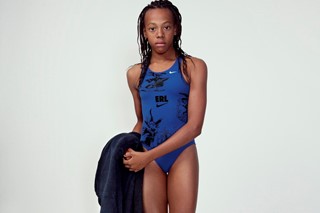 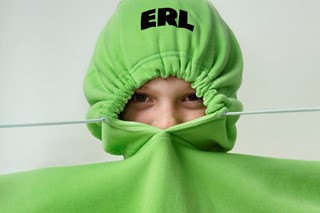 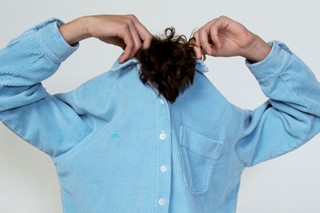 You’ll likely be familiar with Eli Russell Linnetz, even if you don’t recognise his name. The 25-year-old has produced, directed, and photographed some of the most talked about media of the last half-century, including Kanye’s “Famous” video, all of the Kardashian-West family polaroids, both of this year’s viral Yeezy campaigns, those weird Lady Gaga nudes and – perhaps his most shared work thus far – that infamous Ye album cover, which featured the Montana mountains and six handwritten words that read, “I hate being bipolar, it’s awesome.”

It’s safe to say the Los Angeles-native has had a busy few years, but he’s only just getting started. Ahead of the launch of Dover Street Market’s new LA store, Comme des Garçons CEO and DSM founder Adrian Joffe tapped Linnetz to create his own brand, ERL, in collaboration with artist Jordan Wolfson and Nike. “Dover Street Market is sick, it’s like art camp,” Linnetz tells us. “It’s really a collective consciousness of art, colour, texture, material – and it’s worldwide.”

Inspired by Pixar and his hometown of Venice, California, Linnetz’s line features a range of colourful and cartooned streetwear – think ERL-emblazoned hoodies and graphic tees – shot on Venice Beach skaters and the swim team from Santa Monica High School. While the artist counts West, Gaga, and Teyana Taylor among his fans, he was adamant about not gifting the collection to anyone. “Every brand tries to gift their shit to influencers,” he explains. “It was really cool because a lot of those people ended up wanting the pieces anyway – if you make a good product, people will buy it, no matter where or who you are.” The strategy worked; the collection has sold out already.

Following the launch of both ERL and DSM, we catch up with the artist, as he talks the collection and accompanying installation, working with the Wests, and why fashion does have a place in LA.

How did you first get into fashion?

Eli Russell Linnetz: I was just always into fashion. In college – I went to USC for screenwriting – I paid my tuition by sewing costumes for the opera department. That’s kind of how I met Kanye because I was working in theatre in New York for David Mamet, and Kanye saw some of my 3D animations, then asked me to work for him. From there, everything just moved kind of quickly and I was thrown into the fashion world, where you learn really quickly that it’s its own space with its own rules. Kanye has done a lot to break them in a really interesting way.

How did the project with DSMLA first come about?

Eli Russell Linnetz: I had done some video work with Ronnie Cooke Newhouse in the past, who does a lot of creative for Louis Vuitton and Comme des Garçons. He introduced me to Adrian Joffe who asked me to work on something. He wanted to keep it very LA and he knew that I’m from here.

Originally, I was just supposed to design a shopping bag. A week later I called him and just said, ‘Here’s this collection I’ve been wanting to do.’ Of course, he thought there was no way we could do it in time, but six weeks later, it was finished.

What was the idea for the collection?

Eli Russell Linnetz: The whole collection was made a block away from the new Dover Street Market in LA, in Mar Vista, Venice where I grew up. Jordan Wolfson and I have been friends for two years now and I was trying to figure out a way of communicate energy without words, so I asked Jordan to make all of the iconography for the collection. Then Nike got on board, so it was just a big collaboration.

Most of my work is super provocative, but this time, for some reason, I wanted to avoid that. I wanted the whole collection and its campaign to be like a Pixar movie, where it’s something for kids that adults can enjoy too. That’s why I shot kids for the campaign, and the Santa Monica High School swim team. There’s this purity in kids that I wanted to channel in my clothes – that, and the honesty of just being young, and having that energy.

“Everything in fashion right now is kind of inaccessible. Kids are used to spending $400 dollars on a sweatshirt, but I wanted to have a more laid-back kind of vibe” – Eli Russell Linnetz

What were some of the inspirations for the collection?

Eli Russell Linnetz: I ended up going back to my roots in Venice Beach. Of course, there are already other lifestyle brands that exist, but I just felt like everything in fashion right now is kind of inaccessible. Kids are used to spending like $400 dollars on a sweatshirt, but I wanted to have a more laid-back kind of vibe. That’s why I shot the campaign in Venice, too. My studio is actually a block from the skatepark we shot at, and I just asked different kids I saw to come there and shoot.

Everything I did was very intentional but also very casual, and I approached the design of the pieces in the space in the same way. DSMLA is in the Arts District downtown, so I really wanted to make sure whatever I did had its own identity. I really believe it’s not a space that could exist anywhere else than where it is – it’s kind of dead and dirty in that area, which is part of what makes the experience so beautiful.

What is going on in LA right now when it comes to fashion? What makes you want to stay there?

Eli Russell Linnetz: As much of an observer as I am, I never pay much attention to what’s going on around me or where I am in the world, mostly because I’m travelling all the time and at the end of the day, all you have is yourself and your friends. With the internet, someone could be photographed in LA and everyone in the world views it in 30 seconds.

So, even though most people don’t really think about LA as a fashion capital within the hierarchy of the fashion world, it really is the fashion language of LA style that is driving so much of it. I try not to pay too much attention to the LA fashion scene or what people are buying. I’m just using my experiences to make something that feels right to me, and that’s filling a void.

What can you tell us about the installation you created?

Eli Russell Linnetz: Doing an installation at Dover Street Market isn’t like any other store or space in the world. They give you measurements and say: ‘This is your land. Create what you want.’ I think that’s such a great representation of art and culture because it’s all these artists that are being thrown together without any knowledge of one another, but who ultimately have respect for each other. In the end, it creates this weird collage of what these people who have been chosen to be in Dover Street Market feel at that exact moment in time.

In my space, there’s texture, colour, harmony, proportion, and scale. It’s a really laid-back, isolated space, then you get closer, and there’s Jordan Wolfson artwork all around it.

How does the collection fit into your larger body of work?

Eli Russell Linnetz: Everything I do is sort of this manic emotional gut reaction to the things that are right in from of me. So, sometimes that comes out in a clothing line, or a video, or a TV show. My job is just to react to the world around me and everyone else can judge or view that how they want.

It might be something that comes off as very simple or plain but there’s a million decisions that go into making something so simple and straightforward. All the video and photography I do exists in this pop space, so I really wanted to capture those layers and that essence I put into my other work and make it into something that people could wear – and we sold out the first weekend.

What’s next for you?

Eli Russell Linnetz: I’ve got a couple of TV shows I’m developing right now, which is exciting, and I’m focused on my work with Gaga. This year has been a crazy one for me, between working with the Wests on campaigns and videos, and working with Gaga. I co-produced Kanye and Kid Cudi’s Kids See Ghosts  and Teyana Taylor’s debut album, too.

I’ve been running really hard this year, but sometimes that’s good, because when you run really hard, you don’t have time to stop and second guess yourself. You just have to produce something and be done with it, and that’s what I did at Dover Street. I met Rei and she didn’t say much to me, but she walked through the installation and said, ‘You know, Eli means ‘genius’ in Japanese.’ I’ll take that.