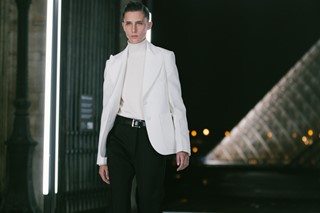 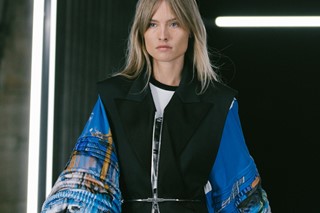 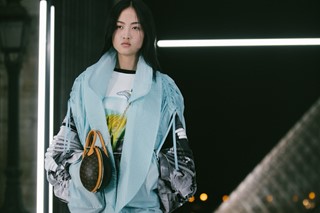 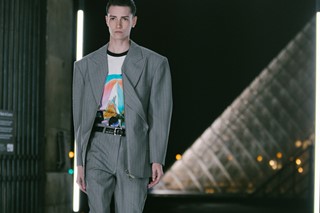 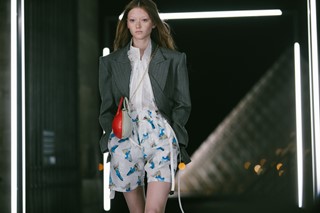 It’s been a long time since Yves Saint Laurent debuted Le Smoking, but Tuesday night’s Louis Vuitton show proved that a suit still has the power to shock. Marking the end to Paris Fashion Week, designer Nicolas Ghesquière presented a futuristic, self-referential collection that blended geography and time – but perhaps the main talking point was the casting.

Making their way down the runway – alongside veterans like Natalie Westling, Sora Choi, and Selena Forrest – were a few less familiar faces. Styled mostly in tailoring, these models initially confounded the audience both IRL and on Twitter. “Menswear!” went the internet’s kneejerk response, but no, this wasn’t exactly true; the looks were part of the regular womenswear line up, just worn by both transgender male and androgynous female models. Backstage, the designer – who works with renowned casting agent Ashley Brokaw – explained that the casting was about playing with ambiguity when it came to gender and ideas of gendered dressing.

“I was born as a woman, but I always felt like I was in the wrong body,” explains one of the show’s models, Jessica Espinosa, who also goes by Jay. “In Guadalajara, Mexico, my place of birth, being transgender is practically impossible. There are no laws to help us change our ID, so in my country if you are born a woman, even when you do transition you’ll always be a woman.”

Jay started acting more like a boy as a teenager – getting a shorter haircut and wearing men’s clothing. Modelling wasn’t something that seemed like an option – until a surprise message about the show came through. “Brisa, the agent at MM Runway in my city, found me via Instagram and told me that Louis Vuitton was looking to cast transgender models. At first, I didn’t believe that this could be real – why would they be interested in that, and how could it be possible that with a lot of beautiful models around the world, a smaller size person from Mexico like me could be selected? But I wanted to try.” After being flown to Paris for a go-see to meet Nicolas and the team, the confirmation came through – Jay burst into tears upon hearing the news.

“Many people bullied me at school, many people made jokes about me or my relationships. It’s hard when I need to go to the bathroom because ladies look at me weird, but even with all those problems, I was confirmed for the most important show in Paris, so everything is worth it now” – Jessica ‘Jay’ Espinosa

In the show, Jay wore a white blazer over a polo neck and black trousers – but there were a lot of different outfits tried before the winning look was nailed. Feeling comfortable in the clothes was important for the team: “I was so happy when they asked me if I preferred to walk in more men’s style clothes,” Jay shares. “I said: ‘Yes, yes as a man please!’”

For Jay, walking in the show is proof that being true to who you really are is worth it, no matter the obstacles you may face along the way. “Many people bullied me at school when I changed my look, many people made jokes about me or my relationships. It’s hard when I need to go to the bathroom because ladies look at me weird, but even with all those problems, I was confirmed for the most important show in Paris, so everything is worth it now! If I’d never decided to change, this could have never happened to me.”

”Another model, Krow, who walked in a structural grey suit, boots, and a graphic t-shirt, had some experience modelling – but back when he was still presenting as female. “I ended up quitting so I could transition and be myself,” the Canada native (and avid cosplayer) told us. “I enjoyed modelling but it also was hard because it was a constant reminder that I was acting like something I wasn't truly inside.”

This was his first job as a male model – having been signed to Lizbell Agency in Vancouver after they reached out over the summer looking for trans models for LV. To him, the fact that a brand with the reputation and status of Louis Vuitton is eager to seek out models across the gender spectrum is an important statement on visibility: “I’ve noticed fashion is really starting to push the limits and boundaries that have been set on gender and stereotypes,” he says. “Seeing so many gender fluid and queer models being represented and being able to just be themselves is really inspiring – hopefully more kids will connect to these wonderful people and see it's ok to just be yourself without restrictions or limitations. Giving this opportunity to a community that isn’t very represented in the public eye is incredible and shows just how far the world has come.”

Aside from Jay and Krow were androgynous, cisgendered female models – including Miriam Sanchez, who grew up playing football before being signed to Traffic Models in Madrid. Her outfit – black trousers and a boxy, graphic vest – was a style of clothing she feels comfortable in. “I believe the casting in the show was very important because it proved to me that being yourself can take you a long way,” she said.

“Seeing so many gender fluid and queer models being represented and being able to just be themselves is really inspiring... Giving this opportunity to a community that isn't very represented in the public eye is incredible and shows just how far the world has come” – Krow

Sanchez was joined by Alyssa, a 19-year-old from Paris represented by C Models. “I guess I can define my style as androgynous,” Alyssa says – but she adds that it’s just how she’s dressed her whole life. In the show she wore a black leather jacket with low-slung army green trousers – ”an honest representation of what I like in fashion”. To her, the casting “was very interesting and different – through its androgyny and its reflection of the changing society nowadays. It is a perfect answer to the gender-neutrality question.”

That question was one a series of designers explored this season – from Hedi Slimane’s men’s tailoring (which will be made available in women’s sizes too) to John Galliano’s first co-ed runway show for Maison Margiela, which felt like the first truly gender neutral show from a major fashion house. Still, Jay – who says that the reaction to the casting back in Mexico has been mixed – reminds us that while the runways may have embraced a more modern way of regarding gender, there are places and people that still have a lot of catching up to do. “I hope that in my country the laws could change soon, we need to be respected and protected by laws, and people.” It’s a step in the right direction, though – after all, “fashion should be for minds,” Jay says. “Not for bodies or genders.”