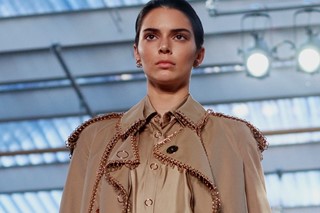 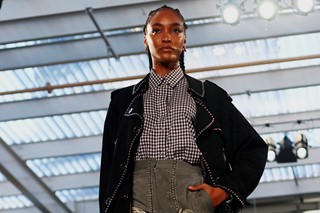 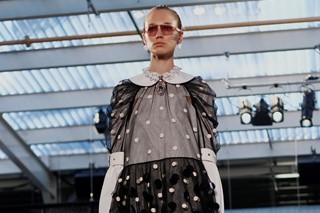 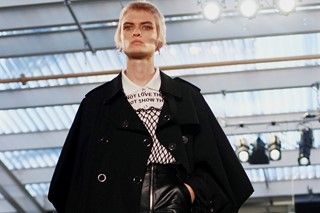 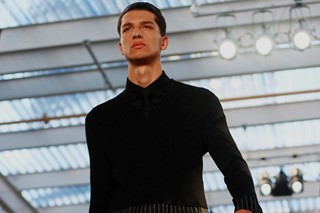 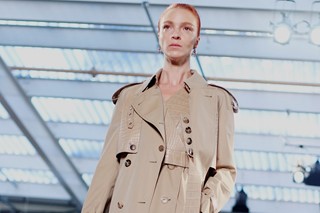 After months of waiting, as well as a pretty hard to miss poster campaign, Riccardo Tisci’s first Burberry collection finally hit the catwalk this afternoon. Here’s what went down.

THE SHOW WAS HELD IN AN OLD SORTING OFFICE

Although you couldn’t tell from the inside – the space near the new American embassy in Nine Elms had been totally transformed. Plush beige carpet lined the enormous warehouse, in which a maze of velvet-cushioned benches and neat deco-esque armchairs had been laid out. The raised runway snaked through the colossal space, with panels of mirror and glass running alongside it.

THERE WAS A GIFT FOR EVERYONE ON THE SEATS

On every seat sat a silk pouch in the newly designed Burberry monogram, with each containing a silk scarf in the same pattern. In a post before the show, Tisci thanked his family – they were there in full force, with his mother taking the best FROW seat in the house.

MASSIVE ATTACK DID THE SOUNDTRACK

Tisci enlisted none other than Massive Attack’s Robert Del Naja to create the soundtrack that accompanied the show, which featured “Unfinished Sympathy” (obvs). The designer explained it was a tribute to his early days in London as a Central Saint Martins student.

A GANG OF MAJOR MODELS WALKED

Tisci brought back some of the supers for the show, including Brits like Lily Donaldson, Stella Tennant, and Jourdan Dunn, as well as some of his favourite girls including Mariacarla Boscono, and Irina Shayk. Naturally, they were joined by a host of the faces defining fashion today: including Anok Yai, Kendall Jenner, and Dazed covergirl Fran Summers.

…with ladylike silk blouses bearing classic house prints paired with pencil skirts, trench coats bearing the iconic check, and tailored jackets and trousers in multiple shades of beige. The new monogram, as designed by Peter Saville, also made an appearance: as worn by Stella Tennant in jacket form, paired with a vinyl skirt with a clashing checked bag. After the opening women’s looks came the men, who took to the runway in dark tailoring, complete with Burberry umbrellas harnessed to their backs with bike chains.

...BEFORE THINGS GOT A WHOLE LOT MORE TISCI-ESQUE

After that came a series of punkier women’s looks, with vinyl overcoats, leather jackets featuring bondage-style straps, and hoodies and mini dresses bearing skewed takes on the Burberry logo featuring heavily. Then, the male models reappeared wearing streetwear-inspired boxy shirts worn over long-sleeved t-shirts, oversized anorak jackets, and loose, chap-detail trousers. The show was rounded off with darkly romantic evening looks with black tux-style tailoring for the boys, and slinky, beaded dresses for the girls. There was a lot to take in – this was basically five collections in one.

THE ICONIC CHECK WAS REIMAGINED AS A STRIPE

As seen on a pair of shorts worn by one model, and a number of other styles. Other motifs included elegant polka dots seen across pussybow blouses, leopard and crocodile coats, cow-print hotpants, and, interestingly, a spotted deerskin t-shirt with the slogan ‘Why did they kill Bambi?’ written across the chest. A sort of Sex Pistols reference or a nod to his famous Givenchy Bambi graphic? You decide...

Accessories included heavy-duty chain belts and harnesses, and envelope-style bumbags, while a number of models wore faux passports on chains around their neck. A statement on Brexit for the newly-relocated London-based Italian? Potentially.