Not only is Alex Box one of the most creative MUAs in the industry – working with Dazed and a whole host of publications – she's also created surprising and groundbreaking make-up looks for brands like Gareth Pugh, Alexander McQueen and Vivienne Westwood.

Known for experimenting with bold colour and prosthetics, her creations often venture into the surreal as her attraction to innovation blurs the line between fashion, art and technology. “I like to immerse myself in worlds that inspire me – art, science and nature are my principal source,” she tells us. “I'm a very material-led person and like to weave a narrative from the material. I absorb myself in colour and texture and form.”

Pushing the boundaries of what make-up can be, Box also creates installations and curates live performances that invite the viewer to experience her work first hand. This Friday will see her perform her art in front of an audience at East London's Rich Mix. It is, she says, a way to inspire people first hand. “Creation comes from being truly inspired – that magic vulnerability – which most people don’t get to see,” she says. “You buy something off the shelf ‘perfect’, but you don’t see the process behind it. I wanted to give people a space for exploration, and to put them in a place alongside me to inspire their own creativity.”

Ahead of the show, we caught up with Box as she talked us through some of her favourite work – as selected from the Dazed archive. 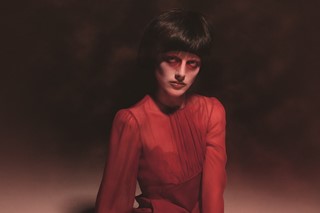 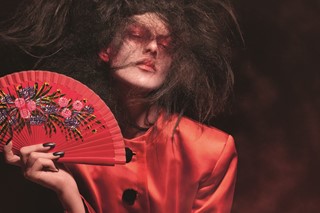 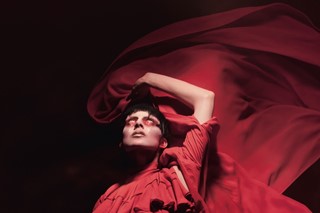 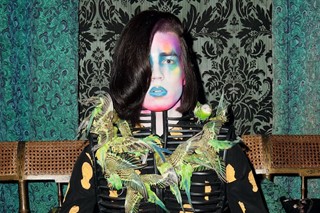 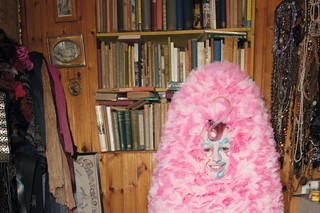 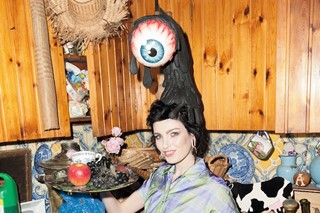 “Ahead of the shoot we recced a really eclectic house in Greenwich and all the various rooms, and thought about the people we were shooting – we found what would be the right setting for each of the portraits; what would reflect their personalities. When I work with real people (as in not models) I want to explore their ‘self’ and interpret who they are – not stray away from it. It was important to acknowledge what they looked like when they were going out and find something in the middle. I remember it was my first time working with Walter who is an iconic photographer. The pace was fast and frantic, about 25 minutes per person. I wanted them to feel good, amazing, their best version of themselves. It was amazing to do something so playful – classic ‘Box’. So I took inspiration from the club scene of the early 00s up to 2012 that was like nothing London had before. It was very performance based. People going out in big costumes, pushing the looks and boundaries, going out being wild. It was also the time before selfies – people were more risky and daring how they portrayed themselves there was an edge to it; it was more about the experience less about the picture.”

“The concept of this shoot was the colour red, but what red signified as a sound, feeling and emotion – red as a metaphor. We had been listening to Fado and Flamenco music and the passion that comes from the movements and shapes of that dance and sound. I wanted to echo that in the make-up – blurred, shadowed, melting, perspiring a maelstrom of textures. Also everything was red: clothes, shadows, accessories, everything but the nails that were stiletto black. I wanted to create a visceral, raw, carnal sexual painting of an indefinable beauty with multifaceted characters. I wanted the make-up to go beyond the face - I included ears, hands, eyes – and ultimately to create things that I haven’t seen before. I wore a mask throughout the shoot – we were using red distress flares so the whole space was covered in red smoke. I was in a massive brimmed hat to protect my blonde hair and a massive trench coat – I looked like something out of a Marvel comic.”

“This was a much more conventional fashion shoot with fashion being the driving force. I wanted to juxtapose colours and textures. We used flowers – amazing lilies – and juxtaposed unusual tones. A lot of primary, opposing colours and really sumptuous ones, nothing matte, everything with an oil base – colours that were lush, deep and fluid. I was inspired by the vibes of 70s and 80s and this wild, heady club culture – the clothes and model fill the space, it is very saturated and high resolution like the aesthetic was back then. Also new textures, mixtures that didn’t exist, I made everything to create what I wanted – there was no make-up out of the pot. I wanted to see what would happen when using such opposing elements and messing around where colour appears. Once I chose the colours for the eyes, I looked for the opposing colour for other areas of the face – it was a map of colour. All geared to the outfit, all geared towards the fashion and responding to the garments. I have worked with Katie Shillingford a lot – we have a similar aesthetic. She loved an oily, glossy look as I did, but I wanted it to be jelly-like and vibrant, almost translucent.”

The London premiere of The Alex Box Performance takes place this Friday June 15 at Rich Mix in Bethnal Green. There are 10 tickets available for £70 for the first 10 Dazed Digital readers who book and use the code 'Dazed' at booking. Buy tickets here.