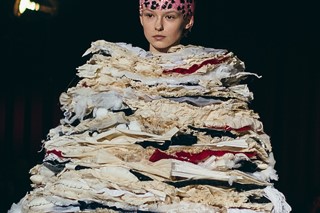 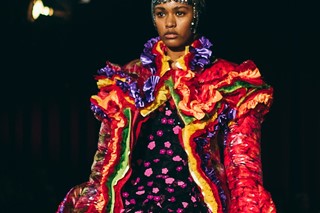 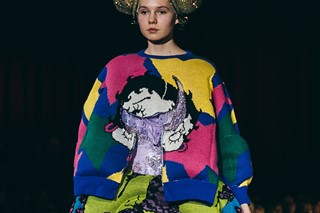 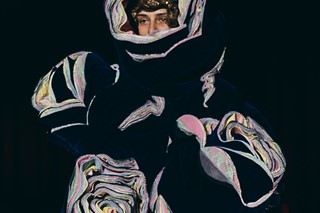 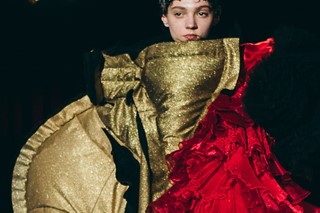 After the last Comme des Garçons womenswear show, there was barely a dry eye in the house (thanks both to Kawakubo’s stunning collection exploring ‘multidimensional graffiti’, and the music picked out by Frederic Sanchez – described as one of the saddest songs ever written). Yesterday’s show didn’t inspire tears, but smiles – even from the models, who beamed at the crowd at the end of the show. Here’s what you missed.

THERE WAS AN ELEMENT OF PERFORMANCE

The audience filed in to an ovoid showspace marked out by a large red velvet curtain, with a raised runway in the middle. Two stage lights hovered inches from the catwalk, lifting up into the air as the show started – just high enough for the models, in sometimes towering, glitter-coated wigs by Julien d’Ys, as well as stacked platform Nike shoes, to pass underneath. The girls came out one by one and ascended a series of stairs to the runway, turning sideways when they passed each other on the narrow strip. At the end of the show, they walked out for a finale procession hand in hand like schoolgirls, standing in groups facing the audience and, in a rare feat for both a Comme show and a fashion show in general, grinned.

THE THEME WAS CAMP

As posited by the late, great Susan Sontag, whose seminal 1964 work Notes on Camp should be required reading (and, conveniently, is available for free on the internet!). Sontag discussed campness as an aesthetic phenomenon underpinned by artifice, examining how it fits into our notions of taste. “It is the love of the exaggerated, the ‘off,’ of things-being-what-they-are-not,” she wrote. “Camp taste turns its back on the good-bad axis of ordinary aesthetic judgment.”

WHICH MANIFESTED IN KITSCHY FABRICS, CLASHING COLOURS AND PRINTS

Make no mistake: this collection was a lot. Polkadots. Florals. Pastel lace. Fuchsia and blue leopard print. Lurid sequins. Fabric came sandwiched layer upon layer, building up to enormous volumes. One look featured a pink and black party dress (which looked like something a Texas heiress would have worn on an episode of MTV’s My Super Sweet Sixteen) superimposed onto the front of a big, more recognisably Comme silhouette. Elsewhere, an outfit was made of a patchwork of what appeared be nylon nighties, while another paired a destroyed Betty Boop sweater with a dress made of layers of bright, flower-appliqued shiny lilac material – the kind which make up the fairy costumes you buy for a three year old.

AND THE MESSAGE OF IT WAS...

The words provided post-show stated that camp is something deep rather than surface level, that it represents a value that we need today, when the signifiers we associate with styles like punk are totally devoid of their original meaning. Kawakubo’s uplifting collection was one of the definitive highlights of the season so far, and proved (as if we needed any firther evidence) that under her eye what should be ‘wrong’ can feel so, so right.