Following their joint show at Pitti Uomo, we caught up with designers Jun Takahashi and Takahiro Miyashita on friendship, the beauty in darkness and what the future holds 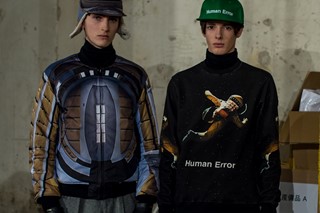 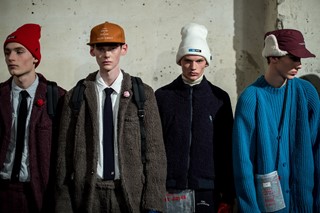 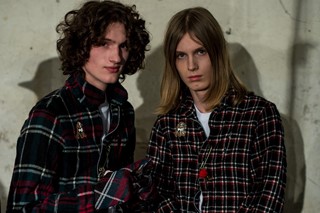 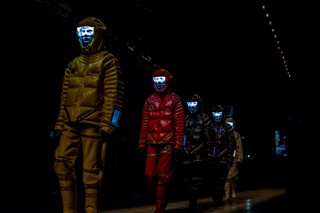 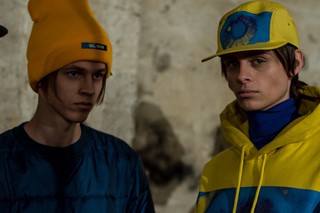 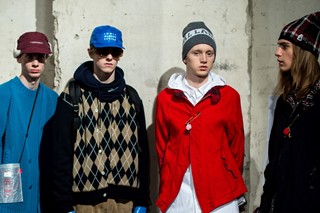 Are you worried about the end of the world? Do you know what to do if there’s a nuclear disaster? Does the thought of AI make you fearful? Then Pitti Uomo served up just the shows for you to watch. Or possibly get very triggered by. Jun Takahashi of Undercover and Takahiro Miyashita of The Soloist flew in to Florence this week to present their back-to-back, double trouble show at Pitti, which took us down a path towards a troubling future.

The designers have been friends since Takahashi got in touch with Miyashita in the late nineties to see his collection. As a testimony to their kindred spirits, they had only discussed the theme – Order/Disorder – and planned a joint finale at the very end. But other than that, they explained they’d worked completely separately and only seen each other’s collections when they arrived in Florence. Friendship goals.

The shows – Undercover first, then The Soloist – began from opposite ends of a darkened Stazione Leopolda railway space. Takahashi’s collection used the storyline of Stanley Kubrick’s 2001: A Space Odyssey as a parallel to the Order/Disorder theme and as a leitmotif in terms of prints and silhouettes. The film may be from 1968 but in a way feels more current than ever as we continue to put our (naïve?) trust in technology as a way to streamline our lives.

HAL’s all-seeing red LED eye popped up as rings on gloved hands and on bum bags, echoing the way our phones are probably eavesdropping on us right now. (And how Sophia the robot is perhaps plotting world domination while she’s watching Westworld and throwing shade on Twitter.) Despite the familiarity of Kubrick’s story, Takahashi managed to make it feel strange and alien, playing on the tinny disconnect that happens once technology is inserted into our lives. The lab wellies and Dr Evil rubber gloves, the warning signs on the back of jackets – all that was lacking was a spaceship siren blinking and blaring.

The force of humanity was there throughout, though, in the sweeping, frayed silhouettes and punk-romantic pleated skirts, ending on a note of softness and the beauty of human fragility with lilac nightwear. But then we had the eerie mini finale of boys in puffer space suits with their masked faces lighting up the darkness surrounding them. Were they off exploring a new place to live? Or dead astronauts in space, perhaps, to semi-quote Marilyn Manson.

Takahiro Miyashita’s The Soloist presented a similarly disturbing scenario, only his was inhabited by post-apocalyptic survivalists shrouded in fringed blanket capes and reassembled tailoring. Their baggy orange SOL print silhouettes (Survive Outdoors Longer) and sinister air vented masks only reinforced the disaster movie setting. And when Nine Inch Nails’ “The Day the World Went Away” built up to its climax for the finale, it was pretty clear what this was about. Miyashita’s collection also felt like it could have been an extension of Black Mirror’s Metalhead episode, with its desolate black-and-white aesthetic. Miyashita’s boys were perhaps on the run from AI dogs. Or running from cannibals. Or cannibals themselves. (There was something resembling a bone as a cape closure.)

But through both collections were woven heritage fabrics, traces of punk rebellion and the warm reassurance of classic tailoring. It was a like a struggle between the human and the not so human, emotion and coldness, freedom and oppression, safety and danger. Was it doom and gloom or daring to fight on against whatever might be coming? That’s what everyone huddled around the designers after the show wanted to know.

“Just the title,” Miyashita said post-show of his interpretation of the theme. “Ask my brain please.” Pressed on whether it was a message of optimism or pessimism, he explained it was more about “trying to evaluate. It’s not especially dark. It’s just a process. And the feeling is not to go back but to go ahead to the future. It’s quite an optimistic message, trying again and again to survive.” In a new way, it seemed, where the world will look quite different. Takahashi was similarly Sphinx-like, noting how the way technology is controlling human life isn’t really a positive thing but that he’s not pessimistic about the future. So maybe the biggest takeaway from both shows was that the world is probably quite fucked, but through that will hopefully come a new beginning.

Here, the designers go head-to-head in an interview – conducted separately, like the making of their collections, before the show. 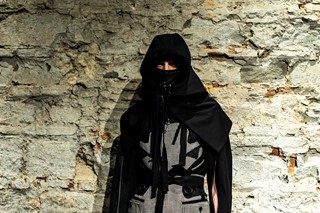 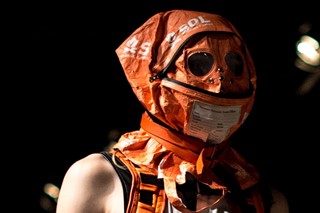 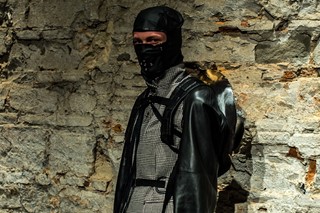 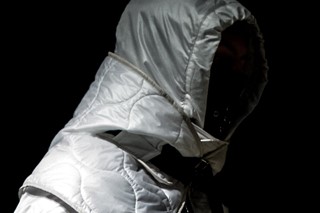 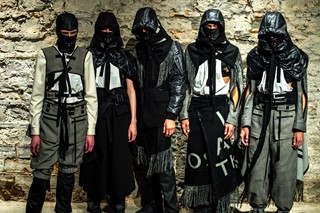 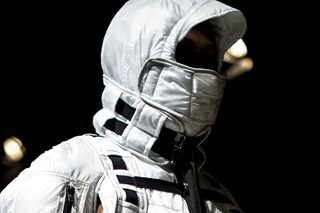 There’s such a beautiful darkness to what you both do. What is the appeal of darkness? Where do think this fascination comes from?

Takahiro Miyashita: I think we both have a similar way of thinking. Jun to me likes feminine and beautiful but with a dark and sometimes scary side to his work. I also have a romantic and beautiful side but also with a dark side to it. I think we like opposites! Scary – funny, pretty-dark. I think our approach to it is a bit different but for me I’ve always seen darkness as something beautiful. It was natural for me and I don’t know where it comes from. You’d have to crack my head open to find out why.

Jun Takahashi: I have always tried to express the question which all humans have and therefore I am always conscious about darkness. I am not interested in something that is simply beautiful or fun because there is darkness, chaos and balance all coexisting.

Is mystery something that’s important to you?

Takahiro Miyashita: It is very, very important to me. Making clothes is like revealing my secrets or other sides of me I don’t usually show.

Jun Takahashi: It is very important. I am always fascinated by mystery.

“I think our approach to it is a bit different but for me I’ve always seen darkness as something beautiful. You’d have to crack my head open to find out why” – Takahiro Miyashita

Do you think fashion can create change in the world?

Takahiro Miyashita: I have always believed so and it should be that way. Creators like us have to change fashion and we also need to be evolving. Otherwise we cannot make it happen. You have to believe you can otherwise, it will never happen.

Jun Takahashi: I do not think fashion can create change in the world but I do believe that fashion can change an individual’s attitude or self-expression. If that becomes the first step to changing the world, then that is a great thing.

What’s the best night out you’ve had together?

Jun Takahashi: I don’t think there is a big moment as we are pretty much always on the same level, but he is a friend that I can have a relaxed drink with.

Takahiro Miyashita: It was in Paris many years ago. After my show, we had dinner at this restaurant called Usagi. We were both young. I still remember the night because we had a really good talk. There were countless good nights with him but among all the nights, that night was the most memorable.

Takahiro Miyashita: When I was a teenager, every day was very simulative. You are sensitive to everything you see, everything you hear. I was a dreamer and I wanted to become everything I saw. Every day, I dreamed. American films, American music, British films, British music. But where I grew up, American culture had a big influence so naturally I was exposed to American culture so I wanted to wear American brands as well. I guess I was different from other kids too.

“I am not interested in something that is simply beautiful or fun because there is darkness, chaos and balance all coexisting” – Jun Takahashi

Do you think your teenage years have been important in terms of your ideas and aesthetic?

Takahiro Miyashita: Yes and no. I think it’s true that your personal and social identity is formed in your adolescence but I really wish it wasn’t. I want to keep evolving so maybe 50 per cent of you is shaped when you are a teen but you don’t want to stay the same person even when you hit my age. Every day I feel nostalgic but that feeling changes every day like it is a story that never ends.

Jun Takahashi: Punk and subculture influenced me during my teenage years and these were very important to me. I do believe what influences you during these informative years will constitute the core of the person. Even after your teenage years you continue to be influenced by many new things, so influences are always evolving without stopping.

What would you like to change about the fashion industry if you could?

Takahiro Miyashita: I just want to keep evolving. If everyone wants it to change, fashion will change. You will need to encourage everyone to change, not just me.