Today marks half a century since one of the most innovative, forward–facing designers of our time was brought into the world, as Raf Simons turns the big 5-0(!) To celebrate, we’ve put together a brief history of his life and work, accompanied by a series of quotes from the man himself. Happy Birthday, Raf! 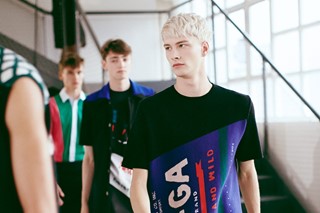 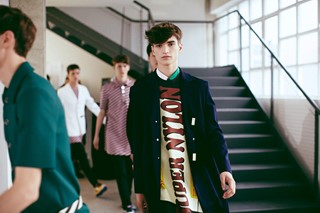 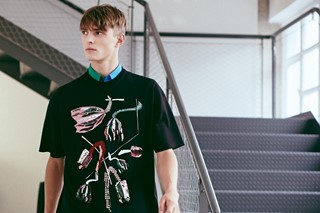 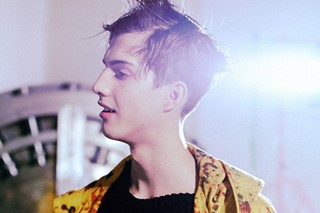 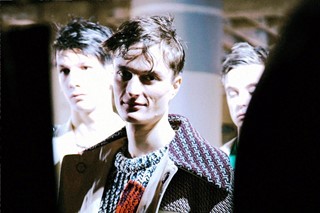 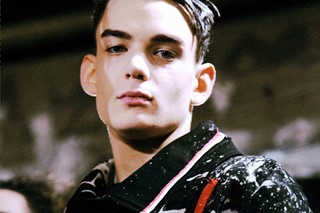 “I grew up in the New Wave period, but that wasn't allowed in school. I remember moments when they wouldn't let four people dressed in black stand together on the playground” — Interview 2008

Simons’ obsession with music is well documented – look to pretty much any of his collections to see its influence. Growing up in the tiny Belgian village of Neerpelt with not much else to do (“all I had for culture was a record store and a television”), Raf immersed himself in music, with Kraftwerk, Joy Division, Black Flag and Sonic Youth all ranking high on his playlist. Sewing the patches of the bands he loved onto his clothes – much to the chagrin of his teachers – Simons found himself part of a band of outsiders in school, setting the scene for the exploration of the non-conformist youth subculture that would shape his entire career.

It’s pretty surprising now, but Simons wasn’t initially inclined to pursue a career in fashion; instead, he opted to enrol at a college in Genk, undertaking a course studying Industrial and Furniture Design. Nearing the end of his four-year course, Simons took an internship at Antwerp Six member Walter Van Beirendonck’s studio in 1990, creating a fake portfolio to secure a position with the avant-garde designer. It was there that he met life-long friend, stylist Olivier Rizzo, who was also interning under Van Beirendonck, and the two, plus photographer Willy Vanderperre, make-up artist Peter Philips and designer Veronique Branquinho would sit outside Antwerp’s Witzli-Poetzli cafe, drinking coffee and discussing fashion for hours on end – particularly the work of emerging designers including Martin Margiela and Helmut Lang, with whom they were “obsessed.”

"Nothing else in fashion has had such a big impact on me. Only at that point did I understand what fashion could be or what it could mean to people” — Dazed, 2016

So said Simons of Martin Margiela’s iconic ‘white’ show. Invited by Van Beirendonck to accompany him to Paris Fashion Week, the 1990 show – held in a children’s playground on the city’s outskirts with the children that usually played there all in attendance, some darting between the models legs, others being carried down the makeshift runway – left a lasting impression on Simons, and marked a turning point for the designer, as he set his mind once and for all on a career within fashion. “Three girls came out. It was a split second – I knew I wanted to do fashion,” he recalled later.

“I don’t want to show clothes, I want to show my attitude, my past, present and future. I use memories and future visions and try to place them in today’s world” — rafsimons.com

Founding his eponymous brand in 1995, in a time when Gianni Versace and Giorgio Armani’s muscled Adonises reigned supreme, Simons quietly put forward an alternative masculinity, with a series of collections that remain some of his most recognisable and influential to this day. Adopted as uniform by slender, unassuming and sometimes slightly awkward men, the designer’s status as an outsider put him in the perfect position to dress those like him, as his slim tailoring and unique vision – along with that of Helmut Lang – unquestionably impacted menswear in the mid-90s.

“When it's only clothes, that is not satisfying enough for me. I don't think I could do this for ten, twenty years if that was all. It also has to be about a psychology or a mentality or a concept.” — Interview, 2008

It was never just about the clothes for Simons. With a deep interest in (and love of) art, film and music, his creative output is underpinned by an ongoing and constant exploration of alternative culture and youth, with nostalgic elements brought into balance by his unwaveringly forward-facing approach. Though he often touches on the past, the designer’s body of work is always rooted in the now (and beyond), with the self-confessedly emotional designer pouring his heart and soul into demonstrating his unique vision with each collection he debuts.

“I’ve come to really question the system. As much as I am part of it, I have to question it for the simple reason that I wonder how far it can go. How far can it go until the moment that it might not work any more?” – Raf Simons

“The most important thing is that we’re completely convinced by anything we make together, because otherwise as a project it doesn’t make sense to me” — Dazed, 2014

Collaborations have punctuated Simons’ career from the word go. The designer’s campaign imagery has been almost exclusively styled and photographed by friends Olivier Rizzo and Willy Vanderperre respectively, while Peter Saville’s iconic designs for Factory Records have long influenced the Belgian iconoclast – notably as part of his stand-out AW03 Closer collection and again last year, as they appeared in his Blade Runner-inspired SS18 show – with the two officially collaborating to create the new Calvin Klein logo when Simons took the brand’s helm in late 2016.

Elsewhere, Simons’ other collaborators include artist Peter de Potter and Sterling Ruby, who he’s worked with to create a series of prints and artworks, The Robert Mapplethorpe Foundation as part of his SS17 collection which comprised a number of t–shirts and sweaters featuring the controversial photographer’s portraits of the likes of Talking Heads’ David Byrne and Patti Smith, revered Scandinavian textile manufacturer Kvadrat, Eastpak, Fred Perry and, of course, adidas. First partnering with the German heavyweights in 2008, Simons dug deep into their extensive archives, re-working their neglected Ozweego and Bunny silhouettes into some of the most desirable sneakers around – long before the Balenciaga Triple S came into being.

"I'm a designer, and for me, things are always evolving, and such evolution is necessary" — Wallpaper*, 2013

In 2005, the designer made a move that surprised many, taking the title of creative director at Jil Sander’s eponymous house. Balancing the brand’s minimalistic sensibility with flourishes that were all ‘Raf’ – bold colour, clean lines, unique silhouettes – his Techno Couture collection of SS11 was lauded as one of his best. Though he’d never previously designed for women, Simons showed a natural propensity for doing so, and, having stood down from his position at Jil Sander, was appointed creative director of the house of Dior. Following in the footsteps of showman John Galliano, Simons injected the brand with a sense of modernity, pushing it forward into a new era – in a stand-out moment from Dior and I, the 2014 documentary that followed the weeks leading up to the launch of the designer’s debut haute couture collection, Dior CEO Sidney Toledano introduces him to the atelier’s staff with the statement “let’s call him Raf, as a token of modernity.”

“I’ve come to really question the system. As much as I am part of it, I have to question it for the simple reason that I wonder how far it can go. How far can it go until the moment that it might not work any more?” — Dazed, 2014

Simons ended his tenure at the house after three years, with the intention of spending more time on his namesake label – “everything (at Dior) is done in three weeks, maximum five. And when I think back to the first couture show for Dior, in 2012, I was concerned because we only had eight weeks!” he told System magazine following his departure, helping to fuel the fire of an industry-wide conversation surrounding the frenetic pace of fashion.

“I know I’m a high-fashion brand with high-fashion prices, but what I like about Calvin is that my mind-set can connect to some kid in Florida. He can only spend $30 on underwear but he still connects to what he or she sees in that world. I am able to create that.” — WSJ, 2017

Despite leaving Dior to focus on his own line, when Calvin came knocking on his door in 2016, Simons was powerless to resist the chance of heading up the American powerhouse. Heading for the States not long after the presidential election, his first show (with an all-star frow including Simons–superfan A$AP Rocky and campaign girl Millie Bobby Brown), offered a subversive take on the American dream. Featuring pieces inspired by Andy Warhol's darker works, Hitchcock blonde-worthy nightgowns and more than a few nods to the Wild Wild West and classic horror movies, Simons has never been afraid to explore the darker side of things – not even the foundations of the supposedly squeaky-clean, all-American brand that’s now under his creative control.

“Somewhere, in some city in America, someone is wearing my clothes, and I'm happy with that” — The New York Times, 2005

As he continues to redefine the house of Calvin Klein for a new generation, and his own brand continues to evolve and grow, Simons’ underlying objective remains as understated as the man himself. “Overall, I want to make sure people fall in love with the clothes,” the radical designer stated recently. We think it’s safe to say that for many it’s not just a case of being in love with the designer’s work, but head over heels for it. Just ask A$AP.