Teresa Engle’s chance encounter with the late artist and his mentor and benefactor Sam Wagstaff in France led to this series of honest, intimate and rarely seen photos – this is the full story behind them

When you think of Robert Mapplethorpe, powerful images come to mind: the purity of his nudes and flowers, the precise lighting and printing of his work and, perhaps most recognisably, the transgression of boundaries that he boldly took. You may remember Mapplethorpe as a beautiful young man whose brief existence on Earth forever changed the way we think about the spaces where art, photography, and pornography intersect and unfold.

While many know his work, few knew the man himself, the person behind the bullwhip. Teresa Engle is one of those who had the chance to spend private time with Mapplethorpe as his career reached stratospheric heights in the art world. In July 1981, Engle was fresh out of college, just getting her bearings in the world, completing a year-long darkroom internship with Lucien Clergue in Arles, France. Although she had studied photography, was coming to realise her true calling was that of a printer.

Mapplethorpe has come to town to show his work at the annual Rencontres d’Arles photography festival. Engle first met him when he dropped by the Clergue studio, but the forces of fate had them cross paths once more, while Mapplethorpe was lunching at Place du Forum. This chance encounter led to an unexpected connection of a most profound kind, one that resulted in the opportunity for Engle to photograph Mapplethorpe and Sam Wagstaff, his benefactor, before they left Arles.

Engle’s portraits from this encounter will be on view in An Afternoon in Arles: Photographs of Robert Mapplethorpe and Sam Wagstaff at Daniel Cooney Fine Art, New York, (January 11 – February 24, 2018). Here, she remembers the hope and inspiration that Mapplethorpe provided her in the formative years of her career, and what it’s like to photograph one of the world’s top photographers.

“Arles was a very sleepy place. It was raining and it was cold. I was not socially accepted by my peers, the kids in photo school, or the young people my age. It was really hard at times. My life in France was about the darkroom at Lucien’s studio. Most of the time I was walking around by myself and photographing.

Then, all of a sudden, summer came along, and the festival began. The streets were full of people and everyone was in the cafes. Every night they had a show. There was a lot of networking and a lot of people. It was just overload.

I remember Robert Mapplethorpe and Sam Wagstaff came to the studio. I heard voices – people speaking English – and I came out of the darkroom. Lucien told me who they were and he had shown me work. I didn’t know who he was.

That evening or the next, Robert’s show was highlighted with a slide projection (held in the ruins of an ancient Roman amphitheater). That’s how I met Robert – through his work. The music and the imagery were beautiful and I was taken aback. I had never seen anything like it. The picture that got me was the American flag. At that very moment, I realised how homesick I was.

The next time I saw Robert, I was having lunch at the Place du Forum and the poor guy, he was trying to eat his sandwich, but people kept asking for his autograph or to look at their work – not respecting boundaries. It was the middle of the day. It was hot. He looked over at me with this look. I don’t know how I had the courage to do it but I felt this need to rescue him. I went over to his table and said, ‘Robert, it’s time for you to be at Lucien’s’, and he said, ‘Oh yeah, that’s right.’ He totally went along with it.

We walked up the hill and went back to my apartment for about an hour. Nobody followed us. Nobody knew where we went. We just sat there smoking cigarettes and drinking coffee. He asked me about my background and I told him that I wanted to be a printer. Right away, he understood. I could tell when I would tell people this whether they got it or not and he got it.

He had that printer-photographer relationship and that made me feel really good. I was always photographing but there was a line between making pictures and having a career. It gave me hope to listen to Robert talk. When he spoke about how much he respected and depended on his printer, it validated for me that yes, this is possible.

Robert was a really thoughtful, articulate man and I felt very comfortable with him. I asked him if he would let me photograph him and he said yes. I already had the place picked out. I knew that I wanted to do it up in the empty apartment above Lucien’s studio. We just had to find a time. I walked him back down to his hotel. I always joked that it was like having Elvis in town. It was just crazy (Laughs).

A couple of nights later, a different photographer’s work being shown in the arena. Robert was with Sam and there was a crowd of people around them. I was sitting off to the side all by myself. Robert got up, left the people he was with, and sat by me for the rest of the show. Sam had no idea where he was.

I think that Robert sensed something in me. I felt like I was ‘other.’ I was different. I always asked myself, ‘Where do I fit into this whole thing? Do I fit in? Am I good enough? Am I smart enough? Why do I feel like I’m ‘other’?’ ‘Other’ can be your profession, your race or ethnicity, your religion, your orientation – it can be a million things. I think he sensed that I was not sure of the whole thing.

On the last day, they were having a party at Lucien’s house and Lucien was showing his work. I caught Robert’s eye and when we left to go upstairs to take the photos, Sam followed us.

It panicked me – to say the least. I hadn’t talked to him and there seemed to be a bit of tension between the two of them. I didn’t know what their relationship was and I didn’t ask. I just knew that Robert had agreed to let me photograph him and Sam followed us. Ohh God! I was nervous.

I knew what film I was using and I was really good at the light. I was always good at guessing the exposure in the darkroom as well as photographing – and anything else, I can print around it. I can take the worst negative in the world and make it look great so I knew I would save myself in the darkroom had I not done things right.

In the very first photograph from the series, Robert is alone and he looks like a young boy. He’s shy and pensive looking. As it goes on and you go through the contact sheet, you see where there’s a rhythm. Sam begins to warm up to me. He starts distracting me away from Robert and I have to pull them back together. It was a valuable lesson. It’s hard to photograph people. It’s hard to orchestrate that and I knew I had a limited time. I didn’t want to be a pain in the butt. Two rolls of film and that was it.

Robert gave me his address in New York. I developed the film the next week and made some 8 x 10s. The ones that I liked, I sent them to him and he thanked me, and that was it.

I have always photographed but I never called myself a photographer. I probably still don’t just because it’s such a heavy identity. I’m working on it! (Laughs). It’s good to change. It’s good to evolve. It’s making me learn more about myself.

The one thing I have discovered is that it’s really hard to print for myself, oddly enough. I never really printed too much from the session. It never occurred to me to print them and sell them, so I just gave them away because Robert had done good for me.” 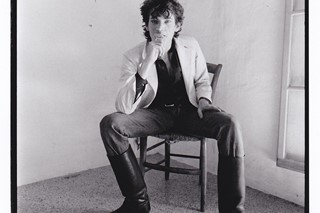 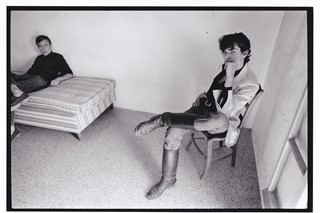 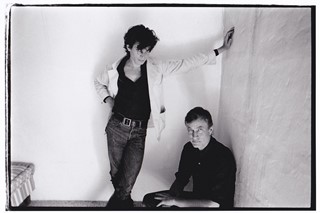 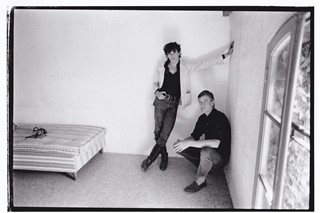 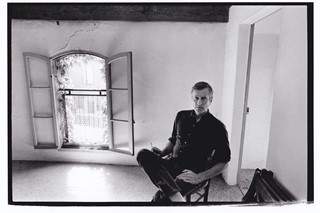 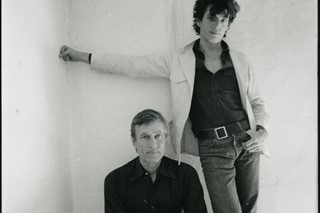