We meet a unique streetwear devotee, with fans as far away as Asia and 30,000 followers on Instagram 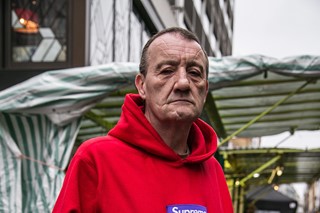 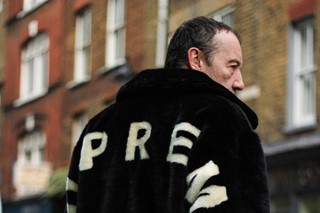 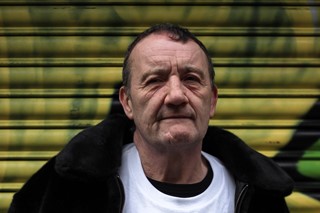 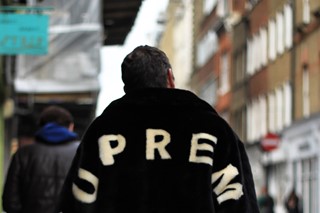 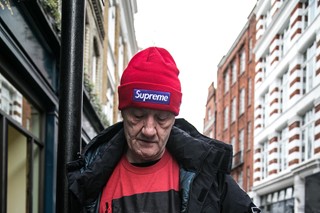 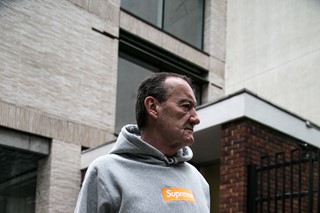 I remember a houseparty when one of my mates just eyed me up from head to toe, and just said: “You look like Phil Mitchell but dressed like he was a member of Odd Future”. I’m not even old (maybe it’s my lifestyle) but it’s kind of stuck with me ever since. With the meteoric rise of streetwear brands like Supreme, North Face, Stüssy, A Bathing Ape and so on, most of which is worn by 16 to 30 year olds destroying their overdrafts for jackets or trainers, surely there must be older people out there, the average guys, the Phil Mitchells?

What if there literally was an average, old man who cops the latest and greatest streetwear, and also has a huge, cult following on Instagram?

Enter Lance Walsh, a man who works at a fruit stall on Berwick Street in Soho, dresses almost head to toe in Supreme and has over 30,000 followers on Instagram (@dinneranddance if you want to follow). When I meet him he’s just copped a fresh red Supreme beanie and a matching long sleeved tee from the weekly Thursday Supreme Autumn/Winter drop and is in good spirits, unlike the tens of fellow hypebeasts still caught in the brand’s Kafka-esque queue to queue to queue to enter system. With Milo Harley, the co-founder of cult clothes shop Duke’s Cupboard, street culture photographer Ben Awin and Lance, we found out how it all started.

“People were taking photographs before Ben, people were coming up with their kids ‘cause I had the (Supreme) gear on” – Lance Walsh

“Me and Ned used to work with Lance on Berwick Street back when Duke’s Cupboard was still just a stall, and occasionally we’d put Lance in our posts ‘cause of his mad style and it always went down well,” Milo says. “So then Ned made him an Instagram one day and we started doing the odd post for him. Then Ben and Supreme were photographing him, so now he’s just blown up I guess!”

“I was wandering down the street and saw Lance in a Supreme shirt and thought it was sick so took a photo of him, uploaded it on my Instagram, then it got uploaded onto some huge Instagram pages, and then it became a weekly thing,” Ben adds, “Now either me or Milo will take photos and upload it, so me and Lance became mates from there.”

“People were taking photographs before Ben, people were coming up with their kids ‘cause I had the (Supreme) gear on,” Lance explains. “I just used to wear it, and people would take photos, and it started from there. It is funny when the parents come down though. The dads are the funniest actually. They can’t work it out! And I say to them ‘Look mate, if you can’t work it out, I can’t work it out!’ They get embarrassed to ask me.”

With “hypebeasts” and Supreme collectors known to be some of the most avid and dedicated in the world, with their foresight, motivation and resistance to the elements when wanting to cop the latest drop, I wanted to know how someone as not used to technology as Lance may take his new fame.

“I didn’t really take any notice of the attention,” he tells me nonchalantly, “My kids showed me like ‘Dad look at that!’ And I was a bit like ‘Oh’. I don’t mind having a photo here, ‘cause I’m here at the stall anyway. But I don’t like it if I’m in the pub or something. It gets too much.”

He adds: “Some of the Asian fans cry when they see me. I mean they travel thousands of miles so, they are very thankful to get a picture. And yeah they come and they buy fruit, then they ask you for a photo y’see, so it does help a bit like that.” He smiles.

“Some of the Asian fans cry when they see me. I mean they travel thousands of miles so they are very thankful to get a picture” – Lance Walsh

Does he ever read the hundreds of comments he gets every post? “I don’t ever read ‘em. I can’t even turn a computer on.”

But before the Instagram fame and the fans, how did Lance get into fashion in general? High end street wear as a concept is a relatively recent one, and brands like Supreme weren’t around when Lance was younger.

“I’ve always been into fashion since I was a kid,” he says, sipping a mulled cider. “My nan used to work in the cashmere shop as a cleaner, W. Bill, on Bond Street. I used to get cashmere socks, cashmere jumpers, we used to get the sample stuff. When you’ve had it since you were young, you get a taste for it, so suddenly you don’t wanna wear Marks and Sparks jumpers anymore. That’s how that started.”

“I used to wear Ferrucci jeans, or mink coats with the lace underneath, and a few old Belstaff motorbike jackets. When the Belstaff shop opened on Conduit Street I bought the knee high boots they made. But really, I don’t take any notice of the changes in fashion. If I like something, I get it.”

So why then, out of all the top brands going at the moment, does Lance choose to avidly wear Supreme? Top streetwear brands are everywhere at the moment, surely he could choose to diversify his image a bit? What is it about Supreme?

“I’ve still got other stuff, but it’s all in boxes, I don’t ever wear it,” he says. “Supreme is just what’s comfortable to me. I only wear what I can wear on the stall everyday, like it’s durable, waterproof, washes well. I wash mine more than most ‘cause I wear it all the time, and the stuff is just as good as it was at the start.”

So all in all, does Lance think that Supreme has had a positive effect on Berwick Street and the surrounding area? A lot’s been said about the gentrification of the West End and the detrimental effect of certain brands and shops opening up in the area and what it’s done to historic businesses.

“It’s more vibrant, more characters around here, more young people,” says Lance. “Whereas before you wouldn’t get that because it was dodgy. It’s still dark at night, with all the drugs and that, but that’s a part of it.”

Then his face darkens as he adds, conversely: “But all the leases have changed. They were all 99 years, but then Shaftesbury's would buy them, and the rents go way up, so the little shops get pushed out, so who knows what’s gonna happen in ten or 15 years time?”

For London’s sake, let’s hope they both are.