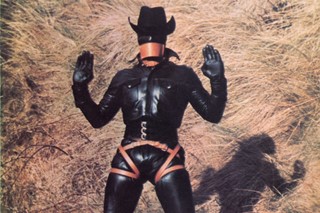 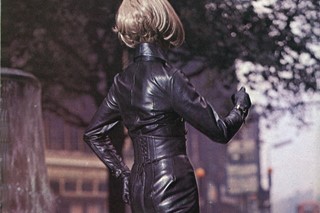 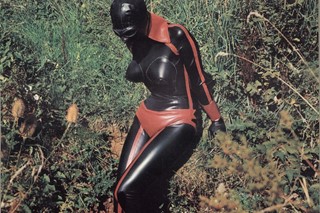 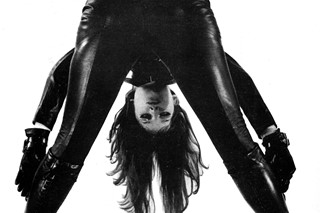 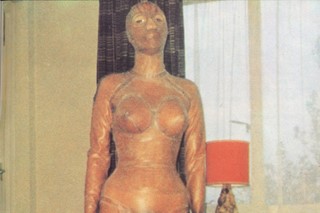 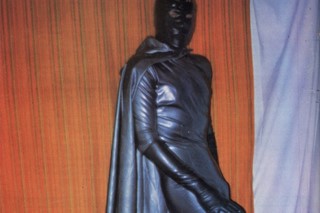 Christopher Kane’s SS18 collection aired the dirty laundry of suburban Britain: the filthy, kinky or emotionally chaotic goings-on beneath the pristine veneer of domestic life. You know, white net curtains with a group of swingers going at it in the living room behind them; a housewife sobbing silently while piping the icing onto a perfect cake – that kind of thing.

And it wasn’t just Kane. Over at Burberry, Christopher Bailey – with see-through macs and rubbery high-necked Princess Di blouses – explored the same interplay between concealing and revealing, thoroughly English tradition and a perverse twist on it. “I wanted a slightly subverted sexiness,” he said post-show. “I think sexiness is best when it’s a little mysterious.”

While it was subtle at Burberry, Kane, who doesn’t shy away from full-frontal fashion, took a more direct approach in exposing the madness behind the prim, proper poise of the seemingly well-behaved housewife. There were shiny PVC washing up gloves, decorative silver clothes pegs barely holding fabric together, and even a washing machine motif with fabric spilling from it.

Like many London designers, Kane’s collection plundered the meaning of Britishness: a facet of our cultural identity people used to carry with such pride is instead a source of embarrassment and confusion in a post-Brexit world. Rather than shying away, however, Kane questioned proper British properness by exposing its smuttier aspects. We take a look at some of the designer’s likely reference points, in this contemporary ode to Britain’s secret filthiness.

“Access is provided for normal sexual intercourse in 100% of the cases. Zips, or an open crotch covered with a bathing slip cover.” Reclining on an overstuffed floral corduroy armchair, an elderly man in a hi-shine black rubber gimp suit mundanely explains the practicalities of fetish wear in John Samson’s 1977 documentary, Dressing for Pleasure.

The documentary takes a look at England’s rubber lovers. There’s the adored Jordan – the it girl of the early punk movement – who is captured sliding into rubberwear during a London heatwave while running Vivienne Westwood’s SEX shop in the late seventies. We meet middle-aged swingers who discuss the realities of rubber as clothing, always maintaining a British sense of properness even when talking about being penetrated through a rubber suit. Then there’s the staff of Macintosh magazine and its fans – who just love to wear rubber macs and discuss writing fantasy fiction about people they see wearing the waterproof garment. It’s the most brilliantly British, scintillatingly banal fetish imaginable.

The documentary proffered a book with the same title, which was a collection of the best bits from decades of AtomAge magazine — a British fetish fashion mag which was an offshoot of designer John Sutcliffe’s rubberwear brand. It’s a fascinating look into the desires of British suburbia, with the magazine thriving until 1985, mailing out to postal codes across England. It’s this exact feeling Kane tapped into: your neighbours may seem perfect, but who knows what really goes on behind closed doors.

Kane’s collection featured the photorealistic nearly-nudes of the late artist John Kacere, whose body of work explored nudity through sheer lingerie and hiked up, crinkled silk nighties. His images of women’s bums through see-thru knickers were printed across baggy tees and apron-slash-tabards, with signature Christopher Kane lace serving as the perfect frame for the picture.

The artist created pieces over four times life size, focussing most intently on the midsections of women and what they wore beneath their clothes. Working from the late 60s through to the early 90s on this style, Kacere’s obsession with these idealised female figures led to a thirty-year oeuvre of images of bums and lingerie. He was American rather than British, but it’s not like the idea of something seedy under the surface of suburbia doesn’t apply across the pond – it’s what the entire canon of David Lynch is based on, after all.

A muse of Kane’s this season was surely the genius Cynthia Payne – the buttoned-up Streatham woman who developed a penchant for prostitution and sex parties. She made tabloid headlines in the late 70s after a police raid uncovered a giant sex party at her home-slash-brothel. Luncheon vouchers would be exchanged for spankings and gaggings, the men of the town oftentimes opting to wear sensuous lingerie in the process. After the police rounded up 53 men off of her property, including an MP, a vicar and a number of noted businessmen, she was charged, spending four months in Holloway prison.

Payne was a sexual revolutionary with an extremely British countenance. And when she was acquitted for yet another raid in the mid-80s, she declared that she wanted to become a formal Member of Parliament to bring reform to Britain’s archaic sex laws, while also releasing a salacious tell-all entitled Entertaining at Home. As the much-overused saying goes: iconic!

Cynthia Payne is the same woman who inspired Julie Walters’ character in the 1987 movie Personal Services, which is the genius film of her life. It’s a kinky, funny, filthy comedy, directed by Monty Python’s own Terry Jones, which captures the perverse desires beneath that buttoned-up Britishness we all know so well.