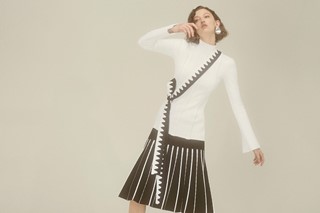 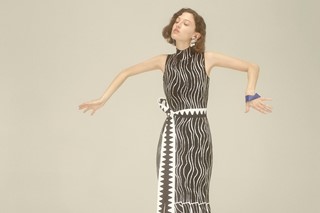 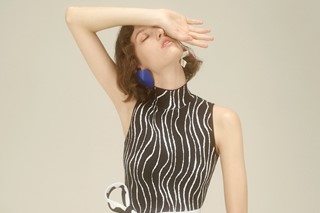 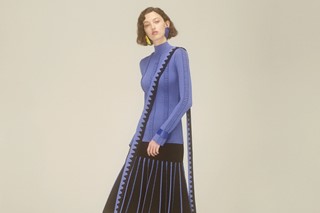 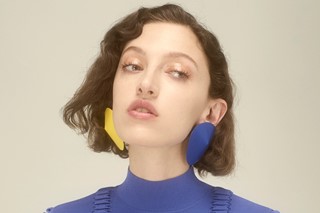 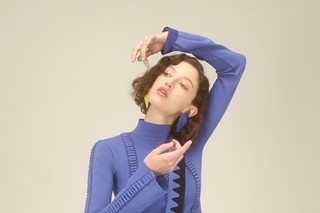 New York-based knitwear brand Phelan only made its debut two years ago, but creative director Amanda Phelan has already begun to forge her own path in the industry. With a multidisciplinary approach to design, her main ambition is to create an artistic collective rather than just a fashion label.

Thanks to her background in dance, Phelan has always been keen to incorporate some sort of performance element into what she creates. “I think the brand really came about because I wanted to create a platform to unite all of these passions into one space and in a very controlled vision – that being my passion for patterns, rhythms, technology, visual and performing arts,” she told Dazed.

For her latest collection – the brand’s fourth – Phelan has further explored these passions. Photographed by Casper Sejersen, the lookbook images feature Canadian model Amber Witcomb dressed in the newest designs. Although aesthetically the images are clean and simple, the collection uses hi-tech methods to create knits that look as if they have been stitched onto the body.

The hazy images see Witcomb surrounded by what Phelan refers to as “noodles”, created by her brother Benjamin Phelan, who is a sculptor in New York. The lines are a recurring motif in the collection, inspired by sketches that Phelan created from her childhood. Despite the throwback inspiration, she’s clear that approaching it from a new perspective was important: “It’s definitely something that I looked back at but everything we drew was new and from now.”

To accompany the images, Phelan worked on a short film that is as equally technologically advanced as the clothing. “We wanted to make the first fashion CGI. It was an opportunity to build the world of Phelan as an actual place,” explained Phelan. Directed by New Media Ltd, the film itself sees a mixed group of models and dancers moving around a studio but is interspersed with retro futuristic 3D motion action where ribbons come alive and people sprout from the ground. Keeping in line with the technologically advanced nature of Phelan, the models were scanned in 3D to give an exact likeness.

The collection will be available in a month on the new e-commerce store and will launch alongside a 360-degree shoot by Chadwick Tyler that will allow people to view the looks from any angle in immaculate detail. “If the future will be heavily dependent on new and interactive virtual experiences then I want to ensure that those experiences feel human and they preserve a sense of beauty,” muses Phelan.