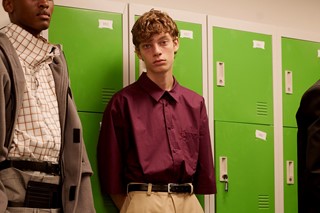 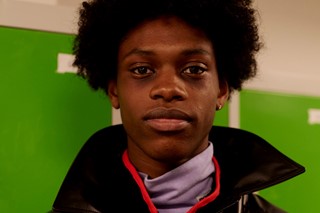 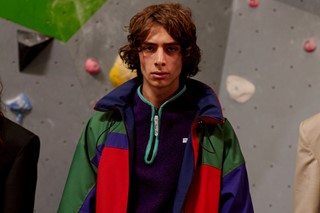 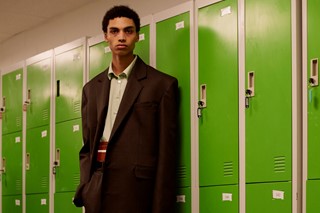 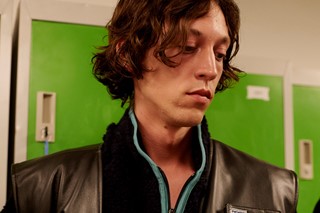 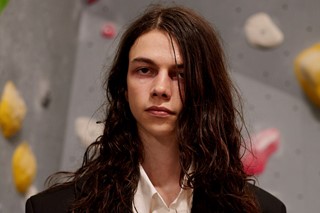 Last week, London menswear designer Martine Rose sent out an e-vite for her SS18 show – but the person on it wasn’t exactly a fashion model. It was Labour leader Jeremy Corbyn, dressed in his now-iconic Wilson shellsuit. Made of grey windbreaker fabric with red stripes, it’s a Sports Direct sale classic – favoured by Jez for getting on his bike and cycling around his Islington North constituency, or popping to the corner shop. Although he’s been smartening up a bit lately, the man who David Cameron suggested “put on a proper suit” and do up his tie clearly favours a uniform of the people.

Last night, Rose staged a show in a climbing gym in her home neighbourhood of Tottenham – an appropriate setting considering the collection’s sportswear influences. With its roots in the Toronto underground in the 80s and 90s and Trevor Hughes’ photos of cyclists, there were stretch Lycra shorts, windbreakers, and dad fleeces – as well as suits (worn without ties, obvs). “I started looking into all sorts of different outdoor activities. Climbers, golfing – it was about making the ordinary extraordinary again,” Rose explained.

The collection was a continued exploration of the idea of the Everyman, she said. So was the Labour party leader a leading reference point? “Yeah, definitely. ‘Course. Jezza was a massive inspiration,” Rose said. “As a designer, I’m massively influenced obviously by my surroundings and what’s happening, so it would be silly to ignore that we’re in the middle of a really important time, politically.” As for Tottenham, the Labour stronghold: “I’ve been here for 10 years… It’s perhaps the most diverse and multi-cultural area in London, still clinging on. It’s full of interesting pockets and lovely people.”

Of course, Corbs isn’t the first political hero to be immortalised on the runway – last January, Balenciaga (where Rose is a consultant) reinterpreted Bernie Sanders’ campaign logo for a series of jackets, caps and even a blanket. After all, if that election showed us anything, it was that the youth don’t just love fire garms – they love leftist politics.