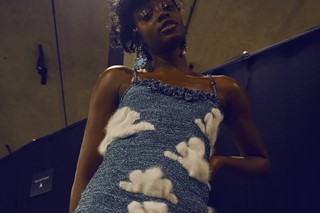 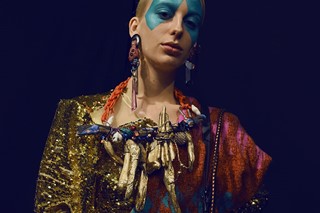 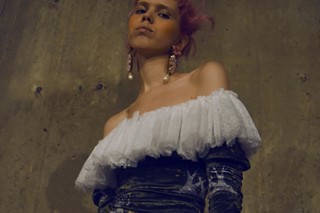 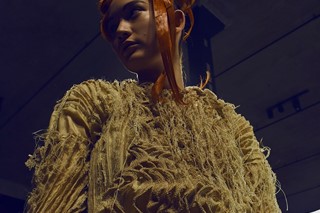 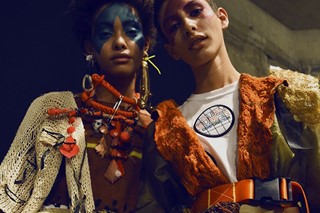 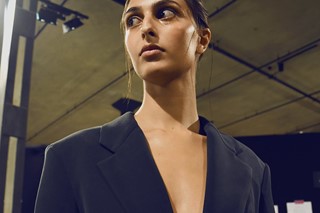 Yesterday’s AW17 Fashion East fixture showcased a quartet of London’s most promising design talents: Mimi Wade, Matty Bovan and newcomers ASAI and Supriya Lele, who took over the presentation space. While Wade further found inspiration in bygone Hollywood movies, Bovan and his impressive cast of models took us to a parallel universe that was simultaneously reminiscent of a historic medieval realm and a dystopian sci-fi future. Meanwhile fresh recruit ASAI explored stereotypes surrounding Chinese culture in the West –asking us to take home both ideas and garments from his show via his Chinese takeaway style press release – and Supriya Lele used her lo-fi approach to luxury as a vehicle for exploring both notions of femininity and her British-Indian cultural identity.

Showing her collection on the catwalk for the first time was Mimi Wade. While SS17 saw the designer take us to MimiMount, AW17 was all about going back to school. “It was only after I had made the looks when my friend Harriet came over to write the press release that I thought, ‘Oh my God! This is like my old school uniform, but way better!” Wade explained backstage. The collection played out as a series of “pale, blue-y turquoise” corduroy dresses (not dissimilar to Wade’s school skirt) worn over Princess Diana style ruffle-neck shirts, illustrated silk separates dressed-up with costume jewellery and signature lace trimmed slip dresses featuring Wade’s usual 70s movie poster references.

Meanwhile new prints were introduced, influenced by cartoons that have been ingrained in the designer’s consciousness for years. Toadstools that drew reference from Fantasia (“I just wanted to create a more clear version of what I see when I watch that film”), paws that came via The Pink Panther, and clouds executed in white mohair on top of lurex knits. As ever, Wade’s signature tongue-in-cheek slogans made their way into the collection in the shape of a “Dial M for Mimi” print, part influenced by Alfred Hitchcock, and partly by The Pink Panther episode “Dial P for Pink”.

Returning for his second Fashion East catwalk showcase was Matty Bovan. Placing a significant focus on knitwear this season, along with 80s machine techniques and deliberately clashing colours and textures, Bovan took his magpie-like tendencies to new heights for AW17. By using end-of-run yarns, each piece adopted relic-like qualities, while jewellery made from pieces of found driftwood made each accessory almost impossible to recreate.

Continuing on from last season Bovan’s inspiration came from his interest in medieval history, and sci-fi films set in dystopian futures – Blade Runner, Dune and the Alien series – informed his parallel universe that transcends eras. Meanwhile, the models that walked through Bovan’s cityscape set – created by London-based artist William Farr – included Winnie Harlow (who walked first), Teddy Quinlivan, Lili Sumner, new face Aleece Wilson (who stole the show at Yeezy and Marc Jacobs) and Adwoa Aboah who closed the show. There was even a collab with Coach, who provided the bags Bovan customised.

“Please see the reverse menu for your order,” read the closing statement on Fashion East newcomer ASAI’s press release that was disguised as a Chinese takeaway style menu. Having grown up in South London, graduated from Central Saint Martins and already done a stint working in LA with Kanye on Yeezy, A Sai Ta is back in London to work on his own brand: ASAI.

So why the takeaway? Centering his AW17 offering around the notion that both the ideas and garments in his collection are meant to be taken home with you, A Sai Ta’s work explores his interest in the everyday and mundane, alongside common stereotypes surrounding Chinese culture in the West. The designs themselves ranged from shredded and distressed knitted jumpers that morphed into dresses via bleaching, dyeing, needle punching and crochet techniques from the waist down, to an Argyle knit corset top and a series of out-sized white satin ruffled pieces.

British-Indian designer Supriya Lele showed her debut collection under the Fashion East umbrella this season. By exploring the female form via the dialogue between her cultural identity, the Royal College of Art graduate has found her signature in what can only be described as unexpected, unconventional luxury. Through her eclectic fabric choices, Lele approaches luxury with a lo-fi lens, in turn subverting the notions of femininity. Think a belted mac fully fabricated from latex, a clear PVC duster coat secured at the waist by gold gaffer tape, or a Pepto-Bismol pink fur jacket paired with distorted floral print PVC trousers.

Meanwhile relaxed tailored silhouettes in rich jewel tones, decorated with hardware synonymous with Indian costume jewellery, teetered towards the more luxurious side of the spectrum. Heavily influenced by her experiences, memories of cultural traditions and family history, Lele also takes inspiration from the British subcultural references of her youth and the work of 1970s performance artists like Marina Abramović and Valie Export. In turn, Lele’s work is an in-depth exploration of her heritage, her youth and the female form.