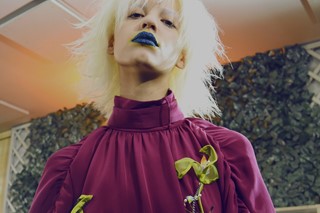 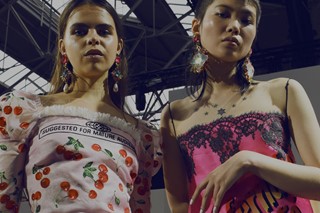 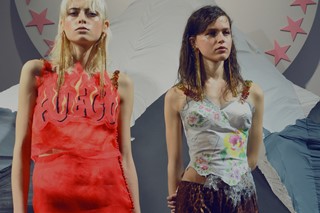 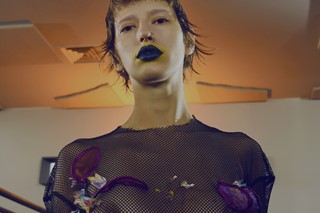 The SS17 Fashion East show took place yesterday at Old Spitalfields Market, showcasing the work of a quartet of London’s emerging designers: Mimi Wade, Matty Bovan, A.V. Robertson and Richard Malone. While three of the rising talents were returners to the catwalk, today marked Dazed 100 designer Matty Bovan’s inaugural show. Having already collaborated with the likes of Marc Jacobs, Miu Miu and Louis Vuitton on illustration, make-up and styling projects, there was a palpable sense of excitement in the crowd surrounding Bovan’s debut. A sure reminder of the fearless creativity London is renowned for, Lulu Kennedy’s Fashion East incubator continues to profile the talents of tomorrow, and today was no exception.

This season, Mimi Wade took us to MimiMount. Further pillaging her references from bygone Hollywood movies, their memorabilia, and their rebellious female protagonists, this season Wade also looked to her ‘Granny Pammy’s’ LA home for inspiration. “I was inspired by the Hollywood interior and the unusual way in which she mixes pieces of furniture and upholstery fabrics,” says Wade backstage. “She’s got paintings she’s done herself up next to a Bride of Frankenstein poster, then she’s got these really twee floral cushions and a fridge covered in animal magnets.”

It’s the latter memory that fuelled the series of animal driven pieces of jewellery that accessorised the collection, designed in collaboration with Vicki Sarge, whilst Pammy’s former pet cheetah provided the inspiration for Wade’s new prints.

With only one signature hand-painted leather dress in sight – inspired by 1960s Japanese horror film Mothra – this season Wade’s offering transitioned to a full ready to wear wardrobe. Of course, Wade’s tongue-in-cheek humour still came into play. Slogans on dresses and patches read: “Sensational Lipstick Murder! Ask Mimi” and “Suggested for a mature audience” – the latter of which riffs off the tagline Wade found on a poster for Barbarella.

Despite having already worked for Marc Jacobs and Louis Vuitton, today saw CSM grad Matty Bovan debut his first collection under his own name. Whilst the prints were driven by his fascination with ancient folkloric signs and symbols, much like the ones that inspired his logo, the designs themselves are an extension of the process whereby Bovan makes clothes for himself.

Other references included downtown New York, the work of Maripol and Stephen Sprouse, and musician Nina Hagen. “It was this big melting pot of things,” said Bovan post-show. “I kind of wanted to have a wardrobe of things people would wear, then to put it all together and elevate it. I feel like I did it, I’m happy with it.” Think shredded, knitted, crocheted and macramé fabrics in offensively saturated tones that engulf the body of the wearer, decorated by a plethora of Bovan’s handmade adornments. His love of fabrics and colours rejected by conventional tastes resulted in a theatrical extravaganza that included a stand-out neon green velvet graffitied fishnet dress and a PVC coat covered with glittering lurex frills, dripping with metallic chainmail and fluro perspex pieces.

A.V. Robertson’s second collection under the Fashion East umbrella was driven by her vivid imagination as a child, along with 1950s horror films like Day of the Triffids and Forbidden Planet. Centring the collection around the idea of a toxic tropical paradise in which plants possess each body that they touch before mutilating them into a new form, Robertson’s models invaded the space like aliens marking their territory.

“It’s like paradise gone bad,” says Robertson post-show. “An ‘other’, magical land where the flowers that sprout are toxic and taking over. The silver metallic PVC also gives it a space-like element, like being on another planet.” The resulting collection played out as an acid-bright silk shirt tucked into cage-like mesh knickers, a black denim two piece suit with trousers that unzipped from the knee down and a pair of metallic silver leather flared trousers. The show closed with a fishnet dress smattered with Robertson’s signature alien-like hand-made crystal embellishments implying the wearer had been mutilated to its new form.

Furthering the aesthetic that subverts the working class stereotypes he associates with his upbringing, Richard Malone presented another stellar collection. While his usual references came into play – signature graphic stripes inspired by construction site signage, racing style cut-aways and off-shoulder silhouettes inspired by the body-con dresses commonly spotted on the girls in his hometown of Wexford – this season’s inspiration came from the uniforms worn by hospital cleaners.

Reinvented through precision-cut tailoring and technical fabrics, each stereotype was elevated, and in turn Malone’s SS17 collection played out as a series of blue and white striped backless mini dresses, off-shoulder button-up mid-length dresses and asymmetric shirt and trouser combinations. Bustiers constructed using an 18th-century concertina technique also appeared in the collection, alongside cross-body bags worn in a way that mimicked how a workman would wear a tool holder on site.