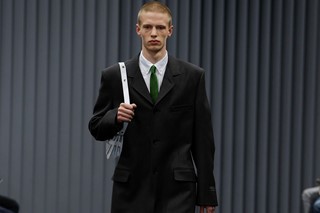 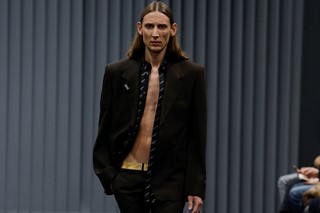 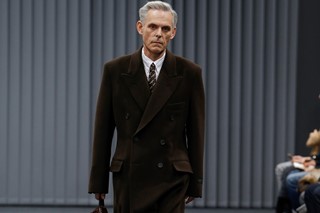 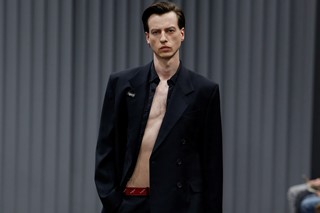 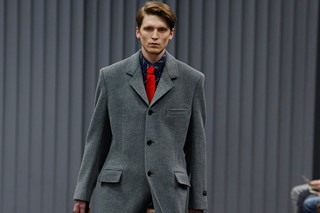 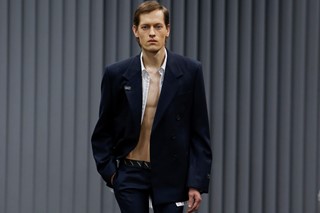 Despite being one of the biggest industries in the world, fashion tends to occupy an artistic space in our minds, not a corporate one. We prefer to imagine the designers of big fashion houses following divine inspiration rather than profit predictions and company calendars, even clashing with the Suits In Charge over the line between creativity and commerciality.

For his second menswear show with Balenciaga, Demna Gvasalia took this topic head on, approaching it in a way that only he could. It was Balenciaga’s move into an office next door to parent company Kering (2015 revenue: €11.6bn) that provided the spark of inspiration – the team found their world brushing up against one of men who dress in suits, even to go into the office on Sundays. Gvasalia being the kind of man who will wear jeans and trainers to a black tie event (“I’m more of an intern,” he laughed backstage about his own style), the collection focused on transforming business attire into something softer and sexier, more undone. Hence the bare torsos, super low waistlines and untucked shirts. “We wanted to take away the rigidity and coldness of corporate suits,” the designer said. “So that’s why the collection had a lot of elements of padding and comfort – most of the guys were wearing sneakers – things being warm and cosy. Something that is not really a characteristic of a corporate wardrobe.”

“Corporate might be a dirty word to some, but for Gvasalia, ‘it’s a reality’ – and as he pointed out, reality is what his work is all about”

Corporate might be a dirty word to some, but for Gvasalia, “it’s a reality” – and as he pointed out, reality is what his work is all about. “I think it's just honest – that's what's happening around us.” Daily deliveries with DHL inspired that infamous Vetements t-shirt, and now he’s employed by Kering – so why not print their logo on a hoodie? The collection didn’t attempt to put a smokescreen up about designing for a multibillion pound business, didn’t attempt to conceal the fact that, yes, margins matter. Instead, it made totally transparent what we all already knew, but did so in a way that still felt authentic to Gvasalia’s rebellious spirit.

Take the name ‘Balenciaga’, which was refashioned into the design of popular socialist Bernie Sanders – you could read it as a sign of fashion surrendering a political agenda to the altar of logo-driven consumption, but really it just felt tongue-in-cheek. And then, of course, there were the accessories – beholden as a surefire money-maker for brands, here there were actual Balenciaga shopping bags, just crafted from leather. It was a devilishly meta, high-fashion interpretation of the ultimate symbol of consumerism – what else says “I came, I saw, I shopped” other than a carrier bag?

The collection was funny, it was refreshing, it was modern (or, perhaps more accurately, post-modern). And come autumn, it’ll fly off the shelves. Kerching