Tapping her grandmother for inspiration and b-movie heroines for empowerment, the Fashion East designer tells us why you can have style and substance

In collaboration with Barbie, Girls Like Us opens a window onto five women who have made their dreams a reality. Through this series of features, we hope to inspire a new generation of girls to conquer challenges and follow their own paths.

Proving beauty, glamour, and female empowerment are not mutually exclusive, the fantasy muse of designer Mimi Wade refuses to choose between style or substance. Since her 2015 Central Saint Martins graduate collection, the Fashion East recipient’s design identity – heavily influenced by Old Hollywood and her starlet grandmother “Granny Pammy” – has earned her fans in everyone from Dazed cover star Pamela Anderson to Lana Del Rey.

Wade isn’t trying to pretend her clothing is steeped in politics. Instead, her brand of empowerment comes from designing clothing which she hopes women feel confident when wearing. With inspiration taken from old film posters, Wade scratches the surface of Hollywood perfection, looking beyond big budget productions to the powerful heroines of kitschy b-movies.

As part of our Girls Like Us series in collaboration with Barbie, we chatted to Wade about the importance of her muse, making Christmas outfits for her toy dolls, and why feminine aesthetics should not be dismissed as anti-productive... 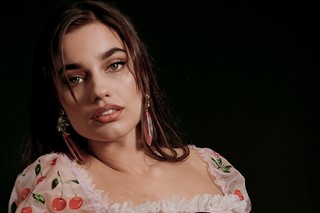 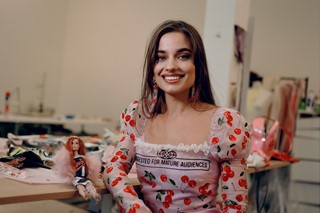 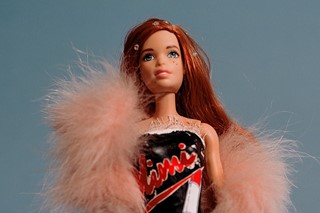 Who is the Mimi Wade muse?

Mimi Wade: I have quite a few different muses, but my grandma is someone I always refer back to. She was a glamour girl, a naughty debutante back in the 50s and 60s. She doesn’t really give a shit – she is quite punk in her attitude, even though she doesn’t dress like a generic punk. She’s had quite a difficult life, but she’s just so resilient and manages to cope with things by using humour, and I try to reflect that in my work.

Would you say a sense of humour is important to you when designing?

Mimi Wade: It’s not important to everybody but it’s just something that comes quite naturally for me. I’ve always been interested in word and image put together. I look a lot at old movie poster graphics, and taking those words out of context often makes them funny – I think that is quite integral to my work.

How do you hope women will feel when wearing your clothes?

Mimi Wade: It’s really important that girls feel confident when they wear my clothes, that’s the main thing. Obviously clothes can only help so much, but I do feel like you can get into a certain mood or character when you dress up.

Would you say female empowerment is important to your label?

Mimi Wade: I really like working with women, and most of my team is just girls. I think fashion is nice because you can work with a lot of women. I don’t want it to sound like I’m against working with men, but I do feel a lot of it is for women, by women. Fashion is still fun, I wouldn’t say my work is overtly feminist or anything like that, I wouldn’t try to. I am a feminist, and maybe there are certain elements of that in my work, but I don’t want to trivialise something so important with something that’s actually quite a lot of fun. I wouldn’t write it on a top – it’s almost much more important than fashion, female empowerment. If I can empower women through my process then that’s really amazing and that’s what I strive to do.

Your work is quite traditionally ‘girly’. Do you hope to alter perceptions of femininity, or is more of a celebration?

Mimi Wade: It’s a celebration of it, and also I think there’s sometimes an assumption that girls who wear a lot of pink and a lot of overtly feminine clothes aren’t serious. This harks back to the archetypal 50s housewife ideal, and I want to challenge people’s perceptions of this because I don’t think the two are mutually exclusive. You can be powerful, independent and strong, and wear pink fluff – it doesn’t mean that you’re submissive or weak.

What would you say to those who argue that feminine aesthetics are counter-productive to female empowerment?

Mimi Wade: It’s very dated – female empowerment should be about freedom and choices. Ultimately, it’s just roleplay, anyway, and it’s whatever you enjoy – men want to wear feminine clothes too and it’s fine. It’s just about what you enjoy, and if you do prefer to wear more masculine things, that’s also fine. But empowerment is about freedom and not being judged for something so silly and surface level.

You used to make outfits for your Barbies to go on the Christmas tree – was that a formative process for you looking back now?

Mimi Wade: My mum and I used white felt and a glue gun and white marabou. We had loads of Barbies, it actually looked quite good, we kept them for three or four years and resurrected them every Christmas. What did it teach me? I guess DIY – and that even if an idea is quite simple It’s not necessarily not going to look really strong. It was kind of one idea explored ten times, it was quite the  “Louise Wilson MA” ideology of design.

“Fashion is still fun, I wouldn’t say my work is overtly feminist or anything like that, I wouldn’t try to... If I can empower women through my process then that’s really amazing and that’s what I strive to do” – Mimi Wade

How do you feel about Barbie’s recent move to become more body diverse, including a broader range of body sizes and types?

Mimi Wade: It's really, really great because as a little girl it's just good to realise there’s not just one size that's deemed as beautiful or normal. As long as you're healthy, beauty comes in all different shapes and sizes. It's an obvious way for young children to digest that easily.

Barbie has always represented a variety of career choices and paths, do you think this has a positive impact in terms of shaping what girls feel like they can achieve growing up?

Mimi Wade: Barbie helps ingrain that mentality in girls that you can be anything you want to be. She's had so many different jobs and such a diverse range of careers, she’s a mermaid, she's a pilot – she always looks fab in whatever she does, so I definitely think that it made an impact on me.

What other inspiring women have had an impact on you and your career?

Mimi Wade: I have a lot of friends working in fashion, we were all in Paris showrooms together. Amie Robertson, Caitlin Price, all my friends really – everybody is so generous and out to help each other, there’s a really nice community. Harriet Verney is really inspiring, I've known her since I was really young and she helped me so much. She's super sharp and witty, I really admire her. Lulu Kennedy is incredible. She's a mum, she designs her own clothes and she runs Fashion East. She does so many things and makes it seem so easy, she's a really amazing role model, someone to look up to.