Spandex, latex and rubber-leather abound at Demna Gvasalia’s second womenswear outing for the historic house today– here’s what you need to know 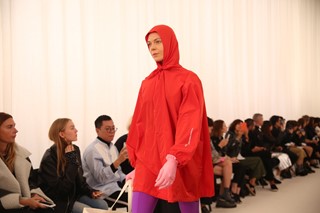 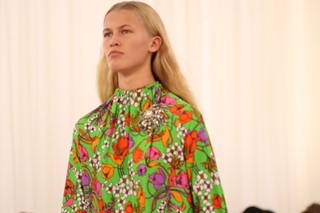 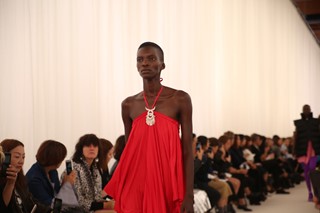 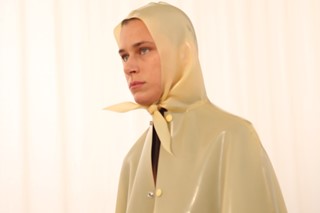 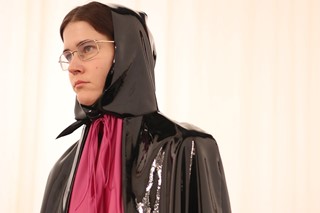 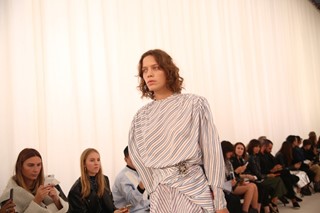 This morning, Demna Gvasalia presented his second womenswear collection for Balenciaga at Paris Fashion Week, in what was one of the highlights of the season. Continuing to usher in a new and exciting era for the house, the designer proposed a collision of fetish and couture that was both rule-breaking and respectful to the house’s heritage and founder, Cristóbal Balenciaga– here’s what went down.

As the first model took to the runway, Clara 3000’s remix of Chris Issak’s “Wicked Game” began to play, setting a romantic and slightly perverse tone for the show. This was followed by a string of famous love songs including Whitney Houston’s “I Will Always Love You” and George Michael’s “Careless Whisper”.

“An exploration of the intimate relationship between couture and fetishism runs beneath the surface of the Balenciaga Spring Summer 17 show,” read the show notes. “This collection takes a theoretical leap, harnessing the possibilities of Spandex, a stretch fabric invented in 1958, a time which coincided with Mr Balenciaga’s development of silk organza Gazar to mould to his couture purposes. To service the fantasies of the modern Balenciaga woman, she now appears encased in Spandex from stiletto-tip to hip”

And this was clear to see – models wore Spandex tights over their stilettos (in every colour from bright red to pale gold), along with thigh-high PVC boots, latex capes and rubber-leather parkas. Everything was about skin and contact, and reminiscent of cult underground rubber magazine AtomAge which was published by John Sutcliffe.

This season, Gvasalia seemed to take inspiration from – and subvert – the aesthetics of the 1970s. This was particularly apparent in the rather lurid floral print that was used to make several pairs of Spandex tights, along with some floaty dresses like the one modelled here by the show’s stylist (and Dazed contributing fashion editor) Lotta Volkova.

One of the most remarkable things that Demna Gvasalia and the Vetements collective have achieved is pioneering a new and now widely imitated silhouette – one that’s characterised by its strong shoulders, oversized sleeves and perhaps slightly menacing attitude. This silhouette was clear to see this morning where the “whaleboned shoulder line” was inserted into otherwise ordinary raincoats and men’s tailored jackets.

According to the show notes, a selection of brooches were taken out of the archive for the show which “the hand of Cristóbal Balencaga may have pinned to the breasts of his original models.” The inclusion of these brooches – which are set with crystals – demonstrates that though Gvasalia’s vision for Balenciaga is one of unbridled modernity, he’s keen to pay respect to the house’s heritage and founder.

Last season, strong criticism was levelled at Balenciaga for failing to cast a single model of colour in its show, but it seems that the house has taken this on board. Today’s show featured a more diverse cast of models, along with some of Gvasalia’s muses like Clara 3000 who also soundtracked the show.

Just like Chanel’s AW16 ready-to-wear show, everyone sat on the front row, on chairs set up in front of white floor-to-ceiling curtains that created quite an intimate setting.