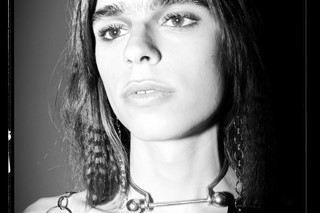 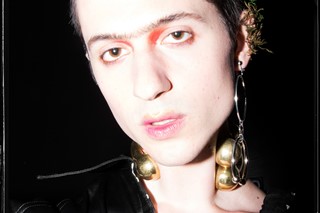 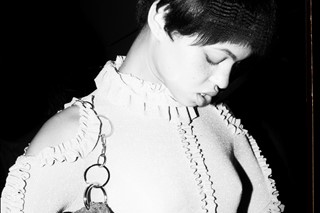 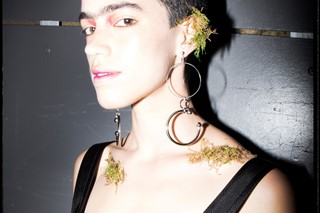 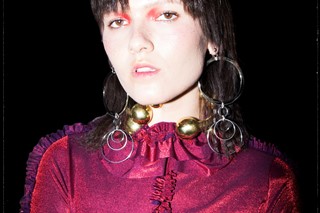 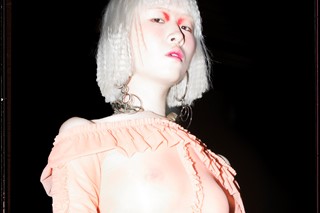 It had been fashion week in New York for one day and a count yesterday morning on runway sites revealed 31 collections already shown.

Thirty-one. In one day. My God, what is happening?

One way to remove the cynical stain of a fashion industry gone steroidal with waste (let’s call a spade a spade) is to prioritise time seeing young brands like Barragán, showing at NYFW for the very first time. Designed by Mexico City transplant Victor Barragán, the budding label has made an internet mark with its splicey t-shirts featuring subjects like Sex and the City, Scream, and Marilyn Manson. Regularly employing metalwork and distressed scrap leather into chap-inspired trousers and halter tops, the nascent brand already has a strong and focused aesthetic, arriving somewhere between Tom of Finland and IKEA.

For their SS17 presentation with MADE, models in revealing trench coats, dresses, and shoulderless lurex tops rolled an oversized papier-mâché boulder up an incline, allowing it to roll back down into the audience. To witness the Sisyphian skit in person was refreshingly funny, and it’s something Barragán compared to the experience of starting a new label in New York with limited resources.

“That was always a dream,” Barragán says. “Moving here, it was my first time in New York, so it's been a lot of ‘let’s see what happens.’”

Joined by his close friend, producer, set designer, and sometimes lookbook model Ruben Gutierrez – who the designer says now makes up half of the brand with him – Barragán set about creating a collection of what I'll fondly refer to as slut hybrids: pleather and denim chap/jeans with popper bottle holders, cargo shirts built from hoop chains, iridescent satine halter tops, ruched chiffon long sleeve tops, and lucite kitten heels. Accessorised with fake rock “purses,” ornamentation is elevated from the sidelines to a starring role.

“Add Barragán to the list of next-generation brands bored of society’s obsession with labels and phobias, proudly and sexually asserting power through mixing men’s, women’s and unisex”

“(Rubin and I) each build half of the collection separately and then put the two parts together,” Barragán says. “We like to twist things to make them look femme in some way.”

Models wore moss on their faces, in their ears, and in their hair, paired with a somewhat Blade Runner-inspired, red cyborg make-up. As Underworld’s “Born Slippy (Nuxx)” vaunted forth from the speakers, the dirty-numb-angel-boys summoned visions of empyreal nymphs from some Midsummer Night’s Dream. “We wanted the models to look like they’ve spent a lot of time outside, with the rocks and the grass rubbing off on their bodies,” he says. “The idea is that a lot of time has passed.”

For the t-shirt addicts, Barragán included a winking addition to his canon which spelt out ‘LESBIAN’ in the logo typeface of the TV sitcom Friends. The designer included it as an homage to watching the show while working, a habit gleaned from his mother. But you can also think of it as shots fired at Jennifer Aniston and company. “Everyone grew up watching that show,” he explains, “but we realised when we were older that they are always making fun of gay people, and it’s actually the entire topic of the show.”

Add Barragán to the list of next-generation brands bored of society’s obsession with labels and phobias, proudly and sexually asserting power through mixing men’s, women’s and unisex. The packed presentation was filled with kids of the same ilk, and it evoked a feeling of promise, angelic naïveté, that invigorating lust of a first summer in a new city. Shows like this can be rejuvenating. Miss them at your slow and wilting peril.