A palette cleanser before the arrival of a new creative director? 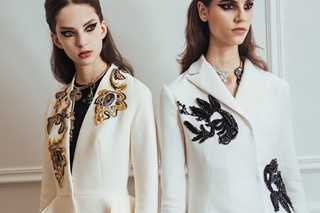 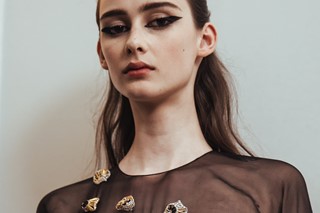 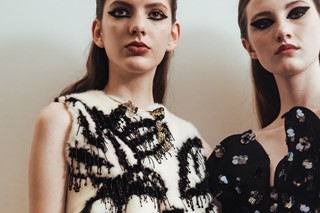 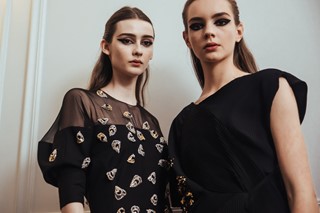 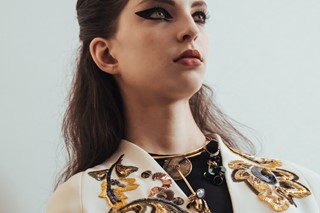 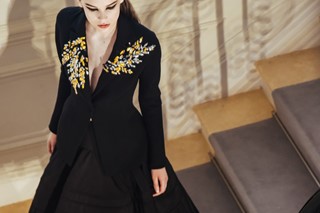 The move from Dior’s usual sculptural built up venue in the gardens of the Musee Rodin to 30 Avenue Montaigne, the official workplace of Monsieur Christian Dior, might have triggered thoughts of a more sombre Dior couture show. One – if industry rumours are correct – that is likely to precede the announcement of Maria Grazia Chiuri, one half of the creative partnership at Valentino, as the house’s new incoming creative director.

In what is normally Dior’s showroom, white walls painted with swatches of gold hinted at the pared-back nature of this haute couture collection. In house designers Serge Ruffieux and Lucie Meier dialled it right down from their previous efforts and took us back to the roots of Dior’s ateliers, as well as that iconic 1947 John French photograph of a white structured bar jacket and stiffened black A-line skirt.

And so the collection was largely rendered in monochrome, with glints of gold catching the eye. A live string rendition of Duran Duran’s “The Chauffeur” played in this palette cleanser of a collection. The rigor and formality had been taken out of Dior’s original New Look so that the bar jackets were loosened and elongated, tops flowed with floor-grazing trains and those sharp A-line skirts were softened with taffeta and organza. Everything was decidedly dressed down with black flat suede sandals, in an attempt to lessen the ‘haute’ in haute couture. The minimal palette was accented only with jewellery-esque gold embroideries and delicate gold and silver trims.

As a stop-gap solution, Ruffieux and Meier have more than held their own, steering Dior through what could have been choppy waters. A haute couture atelier normally consists of two departments - tailleur (tailoring) and flou (draping) – and here it was the flou that dominated in a collection that felt ready to flow into the next chapter of Dior’s history.